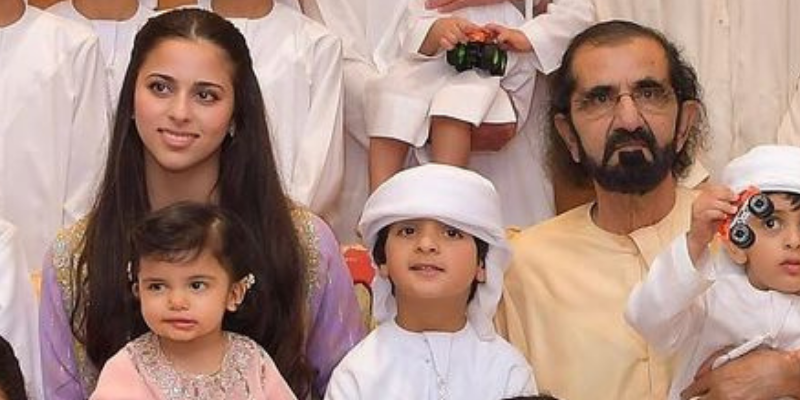 In new photos released, the young sheikha is seen with her grandfather, His Highness Sheikh Mohammed bin Rashid Al Maktoum, the Vice President and Prime Minister of the UAE and Ruler of Dubai, during their family Eid celebrations.

Shared by her mother, Her Highness Sheikha Manal bint Mohammed bin Rashid Al Maktoum, on Instagram, the photographs show the 15-year-old with her younger siblings with their grandfather, Sheikh Mohammed.

Sheikha Fatima is the first child of His Highness Mansour bin Zayed bin Sultan Al Nahyan, the Deputy Prime Minister of the UAE and Minister of Presidential Affairs, and Sheikha Manal.

The first is a group portrait, which Sheikha Manal shared on her Instagram stories during Eid, with Sheikha Fatima sitting on the right next to her youngest brother Sheikh Rashid bin Mansour and her younger sister Sheikha Latifa bint Mansour who was next to grandfather Sheikh Mohammed.

Sheikha Manal, the eldest daughter of the Dubai Ruler, also shared individual portraits of Sheikh Mohammed with four of her five children.

The first was a heartwarming shot of the Dubai Ruler embracing Sheikha Fatima. The other three shots were of Sheikha Latifa, Sheikh Rashid and Sheikh Hamdan bin Mansour, all with their doting grandfather.

From the photos, it’s clear Sheikha Fatima is growing up fast.

In the two photos posted to Instagram, Sheikha Manal wished her “precious and most beautiful Fatima” a happy birthday.

The young sheikha, who is an avid horse rider, is set to celebrate her 16th birthday on June 9, 2022.