A few of Dubai’s government employees would’ve had a stern telling off yesterday. Why? An unannounced spot-visit by Dubai’s Ruler saw him turn up to empty desks.

Vice President, Prime Minister of the UAE and Ruler of Dubai H.H. Sheikh Mohammed bin Rashid Al Maktoum paid a surprise visit to several government offices on Sunday, only to find some workers were absent.

In a video posted on the Dubai Media Office’s Twitter, Sheikh Mohammed is the only person to be seen in the office. 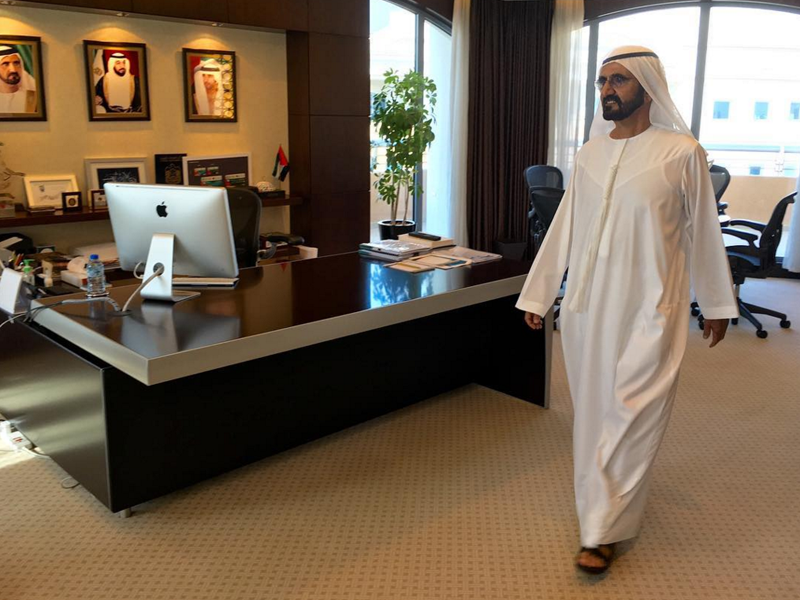 The senior Dubai Municipality officials that have been terminated are:

A release from Dubai Media Office stated that Sheikh Mohammed “made a spot check on ordinarily busy government offices to assess their commitment to providing the highest service standards”.

“He certainly wanted to send a message,” Mona Al-Marri, director-general of the government of Dubai Media Office told Bloomberg.

“Timeliness starts at the top and we won’t go after employees when their bosses aren’t there.”

Read:
Sheikh Mohammed Praises Emirati Women
What The National Dress Means To Me
10 Sheikh Mohammed Quotes We Can’t Get Enough Of
UAE Sheikhs Take On The London Underground

A release by the Dubai Media Office states: “The changes, effective from today [Monday August 29] are part of a move to infuse new blood into Dubai Municipality and provide opportunities for promising young leaders to take on new roles for implementing the highest international service standards in line with the Dubai Government’s objective of providing the highest quality of service across all its departments and bodies”.

He stated that Sheikh Mohammed was on a field tour to government departments, including Dubai Municipality, the Department of Land and Property and the Department of Economic Development and their directors and senior officials were allegedly not present.

He can be seen waving casually at travellers and workers at passport control – this isn’t the first time the friendly royal has interacted with the public. Check out these fun occasions, too.

Sheikh Mohammed’s surprise visits were common throughout the transformation of Dubai into the modern desert metropolis it is today.

We’re sure the man responsible for building the Dubai we all know and love doesn’t take too kindly to slacking.