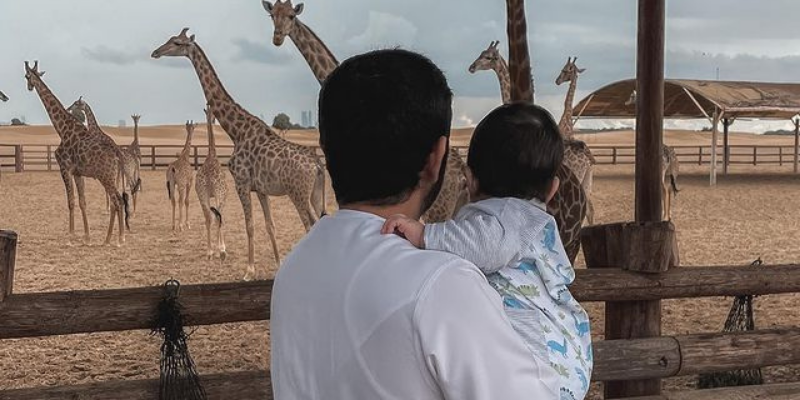 In 2021, His Highness Sheikh Hamdan bin Mohammed bin Rashid Al Maktoum, the Crown Prince of Dubai, became a father for the first time to twins Sheikh Rashid and Sheikha Sheikha.

Now, to mark the start of 2022, the doting father has shared a few snaps showing just how fast his little ones are growing up.

The Crown Prince of Dubai took to Instagram to share two new photos of Rashid and Sheikha visiting the giraffes.

In the first photo, Sheikh Hamdan, affectionately known as Fazza, is holding baby Sheikha and in the second photo, he’s holding baby Rashid.

Both of the little ones were wearing adorable animal-themed outfits for the occasion – Sheikha wore a leopard and tiger one-piece and Rashid wore a dinosaur one-piece.

The doting dad simply captioned the adorable post with one pink heart and one blue heart representing both his children.

This is the first photo the Crown Prince has shared of his children since last year.

At the beginning of December, Sheikh Hamdan a photo with twins Rashid and Sheikha to mark the 50th UAE National Day.

Meanwhile, baby Sheikha wore a dress emblazoned with the colours of the UAE flag on it to mark National Day.

Sheikh Hamdan became a father for the first time last year welcoming baby Rashid and baby Sheikha in May.