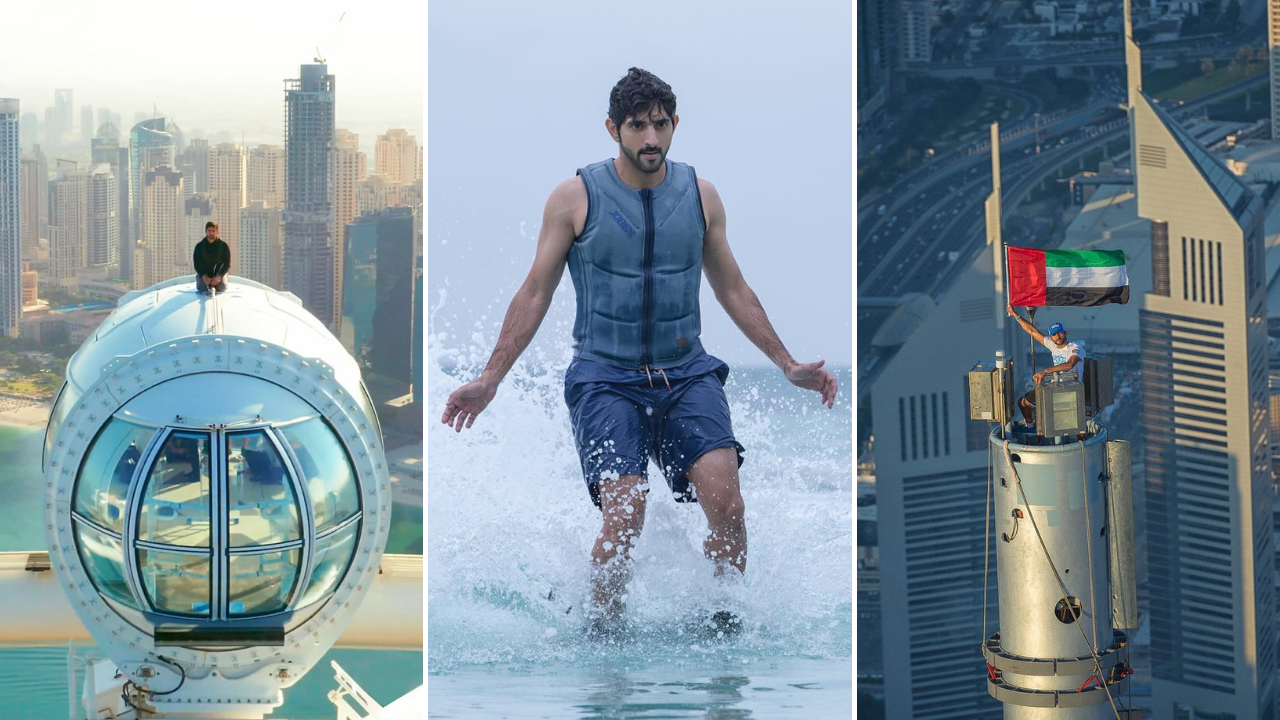 His Highness Sheikh Hamdan bin Mohammed bin Rashid Al Maktoum, the Crown Prince of Dubai, is no amateur when it comes to extreme sports.

By challenging the conventional norm, Fazza always takes a leap of faith and manages to outdo his previous activity.

After digging through the archives, Emirates Woman takes a look at all the adrenaline-fuelled activities Dubai’s Crown Prince has taken part in through the years.

Known for his fine motor skills, Sheikh Hamdan shared a jaw-gripping video of himself flying a motorised paraplane which he smoothly maneuvers mid-air with the help of a parachute. In just about a few minutes of posting the video, it went viral and was shared on several social media platforms. After controlling it with ease, the aircraft is seen going several metres above the ground and he’s surely won the hearts of all his fans through his piloting skills, which is undoubtedly seen in this post.

Riding on top of Ain Dubai

The world’s largest observation wheel, Ain Dubai, opened in the emirate last month. Ahead of the official launch, Sheikh Hamdan perched himself on top of the wheel casually sipping a beverage. Showcasing the daredevil stunt, His Highness posted an impressive video on social media which, to date, has garnered over 10 million views.

Taking a plunge in the world’s deepest pool

Known as Deep Dive, this Dubai marvel holds an incredible 14 million litres of water and has a depth of 60 metres, making it the deepest pool in the world. head of the opening of the pool earlier this year, Sheikh Hamdan took his 12 million followers on Instagram on a tour of the latest attraction posting a video to the platform. “An entire world awaits you at Deep Dive Dubai the world’s deepest pool, with a depth of 60 meters (196 feet),” he said.

As one of the most popular adrenaline junkie activities, it’s no surprise the Crown Prince is a keen fan of skydiving. In the video above, he’s seen jumping off a chopper with another member of the crew and is seen catapulting through the air down to the ground. Having complete grip over the parachute, he manages to make a smooth landing on the beach.

Ever wondered what the view is like from the world’s tallest building? Well, Sheikh Hamdan knows exactly what it looks like from up there and has previously shared it with his followers last year. Decked in his climbing gear, the Crown Prince took a snap of him standing on the tip of the spire while waving the UAE flag without the slightest hint of fear. Fazza had previously scaled the skyscraper back in 2013, in celebration of Dubai winning the bid to host Expo 2020.

Showing off his flyboarding skills

Back in 2019, pictures went viral of the Dubai Crown Prince as he showed the world his serious core strength through this extreme watersport activity – flyboarding. While it might look easy, this sport is quite dangerous and requires a varied skill set. Propelled by jet sprays, one can twirl, flip and soar through the air, which Sheikh Hamdan exactly did.

As the extremely popular Instagram account continues to accumulate a loyal fan base, it’s always exciting to see which extreme sport is next in the pipeline.