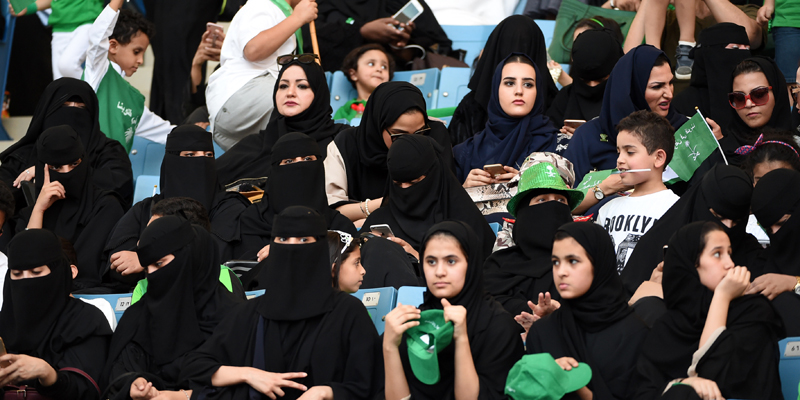 A mixed audience was permitted into the kingdom’s sports arena to celebrate National Day.

Traditionally, Saudi Arabia adheres to gender segregation at large public gatherings – however an exception was made this weekend.

To celebrate the kingdom’s National Day, women were allowed into the previously male-only national stadium for the first time ever.

Read:
Let’s focus on what Amal Clooney was doing at the UN, not her clothes
Saudi suspends cleric who claimed women have ‘a quarter of a brain’

Hundreds of females were spotted in the stands, as a series of concerts and performances took place to mark 87 years since the kingdom’s founding by King Abdulaziz.

Women and their families were seated separately from single men in Riyadh’s King Fahd stadium, Reuters reports, with many donning accessories in Saudi’s national colour.

“We hope in the future that there will be no restrictions on our entrance to the stadium,” one female attendee told AFP.

The celebrations were organised as part of Vision 2030, the kingdom’s post-oil economy plans to make Saudi a more modern, tourist-friendly destination.

As part of the initiative, the government aims to increase the percentage of women in the nation’s workforce from 23 per cent to 28 per cent by 2020.

The government also aims to quadruple the amount of women in senior civil service roles to 5 per cent, according to Reuters.

Read:
Crown Prince Hussein: ‘It feels like the world’s conscience is on silent mode’
‘A friend of a lifetime’: Sheikh Hamdan’s stirring tribute to his late brother

As part of the plan, changes are already afoot to encourage more women into the workplace, such as the Ministry of Labour and Social Development’s project that allows them to work from home, alleviating childcare and transportations issues.

The kingdom also recently held its first-ever women’s day, a ban on women voting or taking part in elections lifted in 2015, and in 2016 the strict religious police were stripped of their power to stop, question, pursue or arrest people.