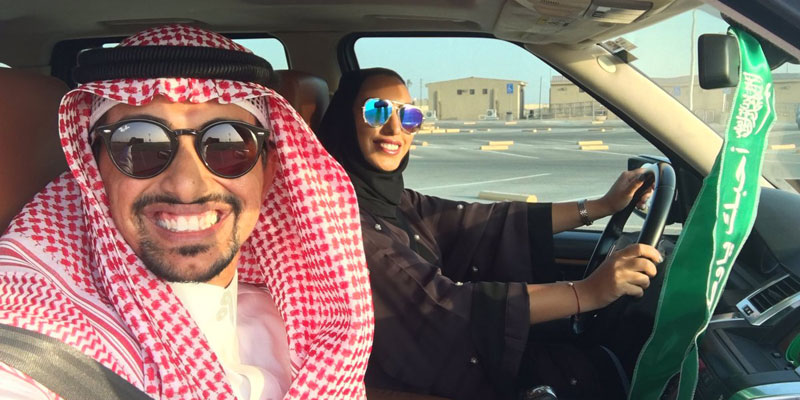 Saudi Arabia’s decision to lift the ban on women driving has dominated headlines of late. The kingdom was the last country in the world where women weren’t freely allowed behind the wheel, and the decision followed decades of protest by Saudi women.

Last month, King Salman issued a decree saying women would be allowed to secure driving licences from next June, and this Saudi couple haven’t wasted any time preparing for the big day.

Faisal BaDughaish recently posted a selfie with his wife in the driver’s seat of their car, as he held her first driving lesson in an empty car park.

“I started teaching my wife how to drive in one of the private parking spaces in a safe and legal way, preparing for the law to take effect,” he captioned the photo.

The couple’s photo has clearly resonated with people, with BaDughaish’s picture liked 13,000 times and retweeted nearly 9,000 times since last week.

The responses on social media were varied, with some telling said BaDughaish he should be ashamed, while others congratulated the couple and said they planned to do the same.

Speaking to the BBC, BaDughaish said that some replies had been so threatening that he made a report to Saudi Arabia’s cybercrimes division.

BaDughaish added that he and his wife had both been waiting impatiently for the law to change, and that they posted the photo in hopes of inspiring other Saudi men to teach their female relatives to drive.

The end of the kingdom’s driving ban has been described as the start of a new era in the kingdom.

“Saudi Arabia will never be the same again,” activist Manal Al Sharif said at the time.