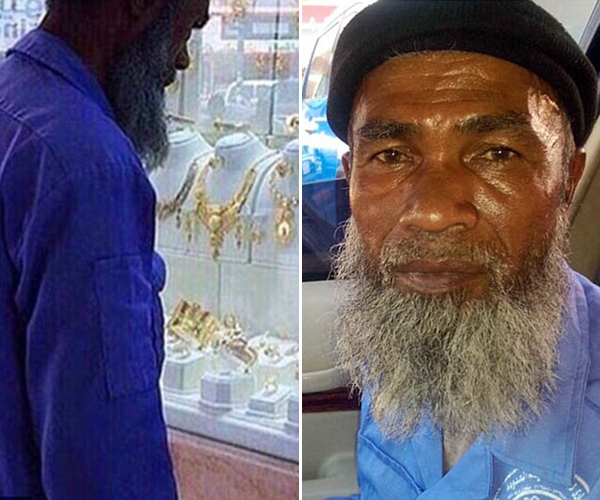 Need a story to warm the cockles of your heart this Tuesday? Look no further…

Nazer al-Islam Abdul Karim did not notice his photograph being taken as he gazed through a shop window.

The 65-year-old, who works as a street cleaner in Saudi Arabia, was snapped by a passerby as he took in a display of gold jewellery while going about his job.

The troll uploaded the image in now-deleted Instagram post, cruelly captioning it: “This man only deserves to look at rubbish.”

However instead of attracting similarly mean-spirited comments, the post only resulted in an outpouring of support for Karim, who’s originally from Bangladesh but lives in Riyadh.

Abdullah Al-Qahtani, who runs a humanitarianism Twitter account called Ensaneya, called on his followers to help him find the cleaner.

And find him they did.

Read:
Sheikh Mohammed Pulls Off The Ultimate Photobomb
Lindsay Lohan’s Heartwarming Encounter At A Refugee Camp
Women Rally To Support Saudi Girl Trolled For Not Wearing A Hijab
Twelve Iranian Models Have Been Sent To Jail For ‘Moral Degradation’

“I received tons of phone calls and messages in response to my tweet. Some were really helpful, while others were claiming that they were the cleaner,” al Qahtani told CNN.

Using reflections in the image to narrow down the location, Karim was named in just three hours.

And since his identify became public, the cleaner has been showered with gifts from strangers including jewellery, mobile phones, cash, honey and bags of rice.

“I was just doing my job as a cleaner in the municipality and found myself in front of the gold shop. I am very happy about the gifts and very thankful,” Karim, who earns Dhs682 a month, told CNN.

It’s always affirming to be reminded how great humanity can be sometimes (especially since 2016 has been a bit of a rotter).