#SaltBae Cooks Up A Storm For Abu Dhabi’s Crown Prince 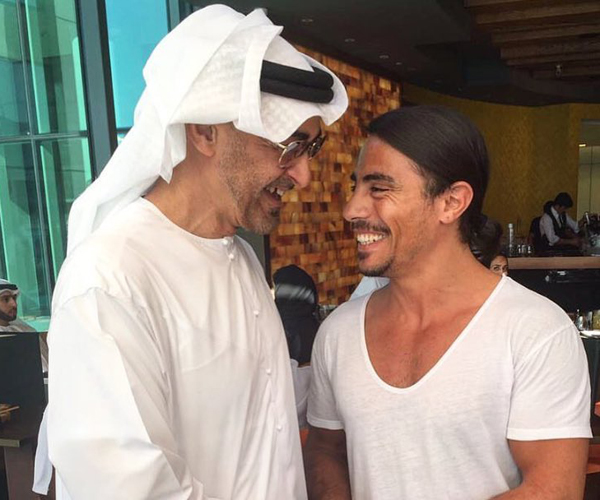 This Turkish chef is beloved by celebrities… and now UAE royalty.

He became something of an internet celebrity this month thanks to his sassy steak-slicing and salt-sprinkling.

And now Nusret Gökçe, the man behind the super-popular Nusr-Et steakhouses, has scored an audience with none other than HH Sheikh Mohammad Bin Zayed Al Nahyan, Crown Prince of Abu Dhabi and Deputy Supreme Commander of the UAE Armed Forces.

Read:
The World Has Fallen Under The Spell Of This Dubai-Based Chef
Want To Catch A Glimpse Of Sheikh Mohammed? Go To This Neighbourhood…

The Turkish chef, who has restaurants in Abu Dhabi and Dubai, shared an image of him shaking hands with the royal, captioning it “The King”.

HH Sheikh Mohammed hasn’t commented on the meeting (although judging by his smile he had a good feed), but it appears the pair were snapped at Gökçe’s restaurant on the capital’s Al Maryah Island.

The Turkish chef, who also has a Nusr-Et in Dubai’s Four Seasons Hotel, found himself becoming a meme this year thanks to his hypnotising Instagram feed.

A particular video of the restaurant owner sensually slicing up a steak outside his Dubai eatery went well and truly viral, receiving 9 million views in just a matter of weeks – along with news articles across the world dedicated to the short clip.

His fans even gave him the moniker Salt Bae as a nod to his flourishes with the seasoning.

Gökçe has since become a bit of a pop culture reference, with singer Rihanna even donning a T-shirt featuring the chef’s face.

Footballer Danny Welbeck even imitated the chef’s flamboyant hand gestures after Arsenal beat Southampton in a FA Cup match on the weekend.

It might be months away, but we’re already plotting our Halloween 2017 #SaltBae costumes…