The Rise Of The Vigilantes | Human Rights Day 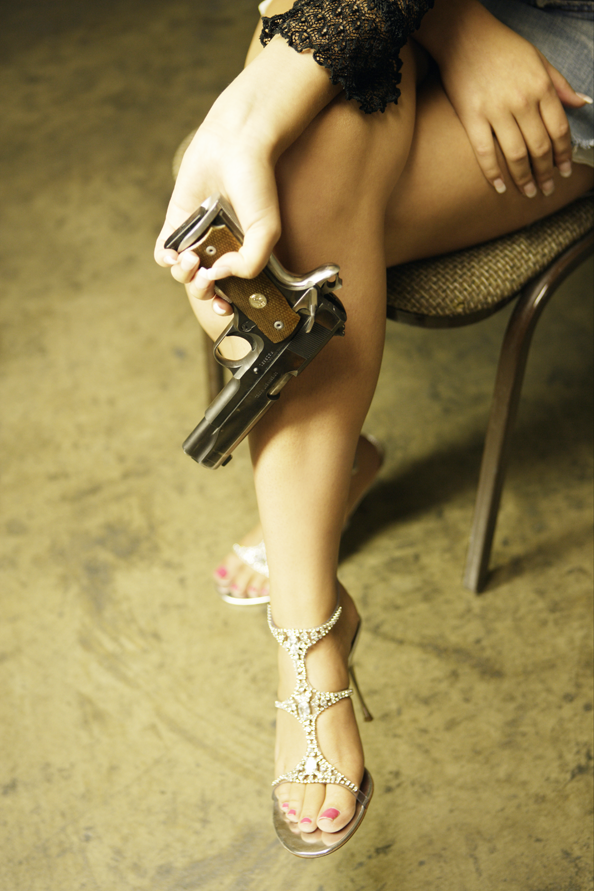 From mob violence to the digital persecution of suspected paedophiles, vigilantism is all over the headlines these days. December 10 marks Human Rights Day but it seems, in modern society, there are some who believe they control the laws and the rights of those they deem breaking them. Emirates Woman investigates…

It’s 5am in a little petrol station outside of San Diego, and the bright orange sun is dragging itself above the horizon. I’m filling up my car ahead of a long drive into Mexico, when a battered pickup truck comes tearing into the forecourt. Three large men are sat in the back dressed in star-spangled bandanas and combat trousers.

A couple of Mexicans are hanging around the forecourt. They’re squat and solid, faces low beneath dirty caps. They look tired, unhappy. Delighted whoops issue from those in the truck, who leap onto the ground, striding towards the men. “Hey, wetbacks!” yells the leader of the group, who’s broad-shouldered and belligerent. “Watcha doing down here, you got papers Julio? Papers, amigo.”

From a pouch on his cargo pants, one of the men from the truck withdraws a small white canister.

They see me staring. I’m not Mexican. I’m blonde and blue eyed, paler than a cloud.

Other invectives fly, hurled at both myself and the Mexicans, who disappear behind the petrol station. The truck men consider following but eventually they get back in their vehicle and speed off, leaving nothing but fumes and fear in their wake. The men are part of the San Diego Minutemen (SDMM), a local group that spends its days terrorising suspected illegal immigrants – or anybody else who happens to be in the vicinity. This is what modern-day vigilantism looks like, and it’s spreading.

Our culture adores vigilantes. Whether it’s Hollywood movies or television drama, we’re forever being battered with anti-heroes doing what the law can’t. We’re taught to idolise these people, to empathise with their plight, but in real life they’re rarely as heroic as they first appear.

Take the Minutemen. Back when they were founded in 2005, they were little more than a glorified neighbourhood watch scheme, with volunteers patrolling the 3,145km border between the US and Mexico. They had credible motives, if dubious concerns. There are roughly 6.5 million Mexicans working in the US illegally, hiking for two days across the desert to reach the unguarded border. As the economy has deteriorated, these workers have become easy scapegoats for people’s anger, blamed for stealing American jobs and carrying diseases onto US soil.

Theoretically, the Minutemen are supposed to sit and watch, reporting any illegal crossings to the authorities. Unfortunately, the organisation has been flooded with thugs and racists who routinely attack people on the border and around the nearby towns. They’ve even been known to start high-speed pursuits with those who employ Mexican workers, threatening them with violence.

And the Mexicans aren’t taking this lying down. Illegal immigrants have armed themselves in fear of reprisals from Minutemen, some forming gangs that roam the border attacking the volunteers. That in turn has caused more fear, putting more guns in untrained hands, bringing more death and violence. Even the Minutemen’s founder, Tony Gilchrist, admits it’s out of hand.

“In retrospect, had I seen this, had I had a crystal ball to see what is going to happen… Am I happy? No,” Gilchrist told The Orange County Register. “Am I happy at the outcome of this whole movement? I am very, very sad, very disappointed. There are all kinds of organisations that have spawned from the Minuteman Project and I have to say, some of the people who have gotten into this movement have sinister intentions.”

In short, what began as an attempt to draw attention to the problem of illegal immigration has spawned into an out-of-control vigilante group – part of a growing global trend that’s seen people take drastic action as the economy has buckled and crime has risen. Nowhere is this more evident than in Detroit.

Struggling with mountains of debt, the Motor City has been forced to cull its emergency services in recent years, leaving just 2,700 police officers to keep the peace in a city of 701,475 – down from 4,000 ten years ago. Waiting times on 911 calls are creeping towards 30 minutes – considerably higher than the national average of 10 minutes – and in this vacuum, against a backdrop of high employment, crime has soared. Detroit now has the second highest homicide rate per capita in the country, with ‘self-defence’ killings currently 2,200 per cent higher than the national average.

In 2012 alone, Motor City judges acquitted 34 people of “justifiable homicide”, representing a 79 per cent increase over the year prior, as people took the law into their own hands – which is fair enough when you consider the law’s actual hands were busy elsewhere. If there’s a Wild West left in the US, it’s Detroit, and the situation’s only getting worse. Entire neighbourhoods are arming themselves, putting up posters claiming “this is a Glock Block, we don’t call 911”, essentially promising to shoot and kill any trespassers on their property.

“We don’t even feel safe in our own homes,” says Mary, a resident of one of these neighbourhoods who we cold called. “Imagine that; imagine not letting your children ride bikes in the streets because you’re afraid for them. The Glock Block is about scaring people, about making the area safe again, like it was when I moved here 20 years ago.” 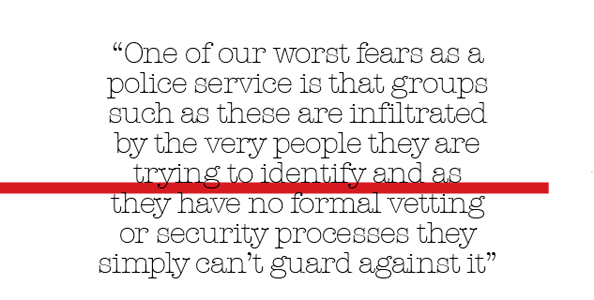 But vigilantism isn’t just about imposing law in a lawless setting. Violent crime in the UK is currently at its lowest level since 1978, yet vigilantism is rife. Take for example Letzgohunting, a UK group that runs an online honey trap to expose paedophiles. Posing as young girls, members of the group lure suspected paedophiles into meetings in public places where they confront them with evidence of their (usually sexual) conversations, videotaping the results.

The group claims to have been responsible for the convictions of 12 people, and on the face of it, their actions are noble. If only it were that simple. “While these groups may often operate with the best of intentions, we do not encourage action of this kind, which can compromise on-going investigations into paedophile networks, and could spark an abuser to further harm a child if they feel threatened,” says a spokesperson for the Association of Chief Police Officers. “One of our worst fears as a police service is that groups such as these are infiltrated by the very people they are trying to identify and as they have no formal vetting or security processes they simply can’t guard against it.”

Worse, there’s no recrimination when their activities get out of hand. Back in May, the group accosted an engineer called Gary Cleary who fled, but was later picked up by the police. Though he was questioned and released on bail, he was found dead in his garage four days later, with conflicting statements as to whether he committed suicide.

Events took an even nastier turn when two sisters took to Letzgohunting’s Facebook page to complain about their tactics. They received a message from somebody within the group who threatened, “I will cut your throat if I see you in the street”, before posting the sisters’ Facebook address and Twitter names on the Letzgohunting Facebook page, urging 11,000 followers to “show her some love cuz I’ve had enough”.

It’s at this point where public sympathy runs out. Whereas state-run enforcement bodies have laws to mitigate their power (nobody mention the NSA), vigilante groups will be forever enthralled to their most radical elements, which are almost certainly going to be violent, angry, disenfranchised thugs.

“We seek order, which leaves us a permanent state of looking for somebody to blame when we don’t find it,” says psychologist Pamela Rutledge. “In fact, we want order so badly we’ll compromise our morals, even adopt extreme methods to achieve it.”

The Guardian Angels have managed to buck this trend. The group shot to fame in the 1980s by riding New York’s subways in their distinctive red jackets and berets. Formed in 1979 by Curtis Sliwa, the Angels made their name tackling muggers during New York’s crime wave, with every member taught basic self defence, and being checked for concealed weapons before being sent out on patrol. Their contribution was such that former New York Mayor Rudy Giuliani – widely credited with cleaning up the city – still remembers them as integral to his efforts. “The Guardian Angels did a very good job – still do a very good job – but a very good job when New York was in its worst situation with crime, so I have a great deal of regard for these men and women who volunteer to serve,” he says.

And they’re not just active on the streets. Through the CyberAngels programme, volunteers patrol the internet, while Angels take part in community outreach programmes, attempting to dissuade children from joining gangs.

“We weren’t in it for the violence,” says Guardian Angels founder Curtis Sliwa. “It took us a while to establish that we were the Guardian Angels, not the Hell’s Angels, not the vigilantes most people thought we were. In the first 13 years I got arrested 76 times – the cops wanted to put us out of businesses, they thought we were thugs, vigilantes, just another gang. The harassment was intense.”

Key to cleaning up their reputation was their good deeds, and key to their good deeds were the right people. Unlike the Minutemen, or other vigilante groups, that allow anybody to join, the Guardian Angels are strict on who they admit. “People can’t just join the Guardian Angels and get the red beret, otherwise there’d be all kinds of chaos, and we’d be creating more problems that we solved,” says Sliwa. “You have to fill out an application, your background is checked, there’s an orientation to make sure all the furniture’s upstairs and arranged in the right rooms, and then you have three months of training – more if you don’t get the grip of it, you can be a trainee in perpetuity. Only about one out of eight make it through. The most important thing you have to learn is the law: what rights do you have as an ordinary citizen to make arrests, to do a physical intervention, to break people up from fights and send them on their way, without becoming part of the problem. That’s the difficult thing to train.”

Society will never be free of vigilantes until we eliminate crime, fear, anger and hatred. Until that distant day comes, the best we can hope for is that those who decide to tackle bad guys can somehow find a way to do it without becoming bad guys themselves.