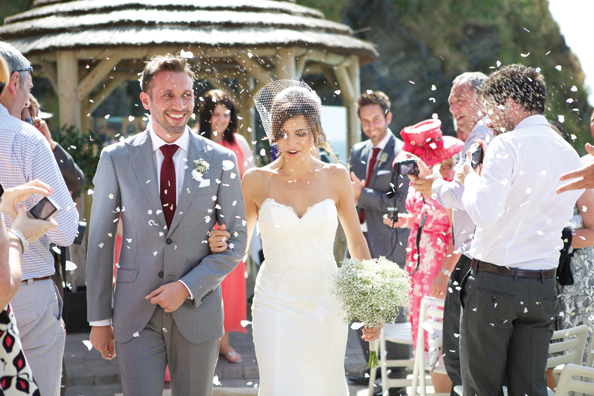 We look at the rustic beachside wedding of Deputy Editor Alexandria Gouveia and her long-term partner Andrew Nagy. 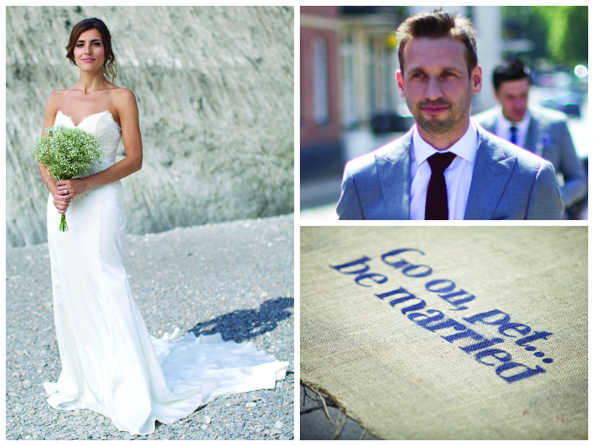 It was 2001 when Alexandria saw Andrew on their very first day at university. She was fresh from a year spent living in Italy. He, returning to education after seven years in PR, was trying to look younger than his years. Whatever particularly youthful pose he was striking that day was clearly successful – they were dating just a few months later.

After graduating from Sunderland in 2004, they spent the next few years travelling the world and enjoying grand adventures, from wrestling goats in Australia to trying to look cool in New York’s West Village.

Dubai was their next great escapade, and it was one that, in 2010, would lead to Andrew getting down on one knee and proposing to a rather confused looking Alexandria (nerves had resulted in a rather complicated speech). Thankfully she said yes. He claims the confusion worked in his favour. 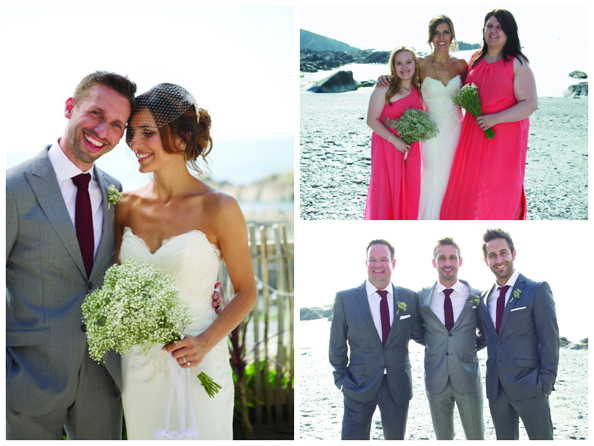 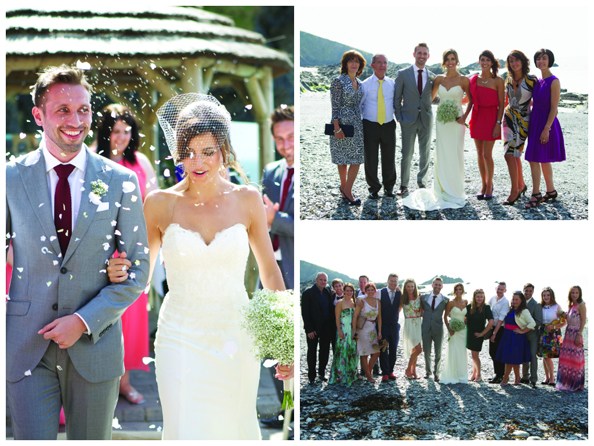 And so in July, after nearly 12 years of dating, all of their nearest and dearest made the long trip to the stunning Tunnels Beaches in Ilfracombe for a wedding with truly international implications. Family and friends from Portugal, Hungary, Dubai and England all made the journey to North Devon for a day that would be spent basking in the sun, laughing and dancing. Naturally, Alexandria and Andrew claim this as their greatest adventure. 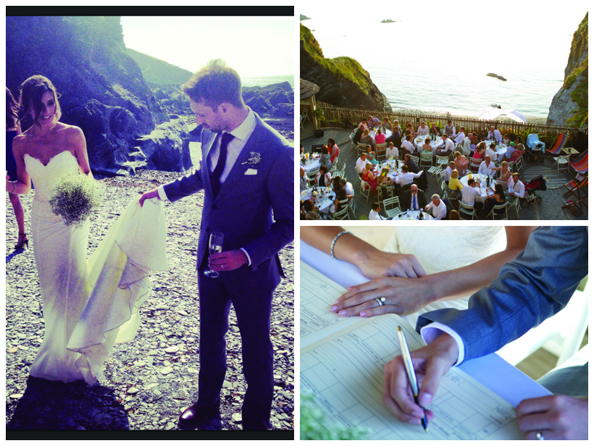 Venue: The glorious Tunnels Beaches at Ilfracombe, Devon. The couple, who hail from Birmingham and Durham, chose the location for its aesthetic similarities to Madeira (where Alexandria’s parents come from). 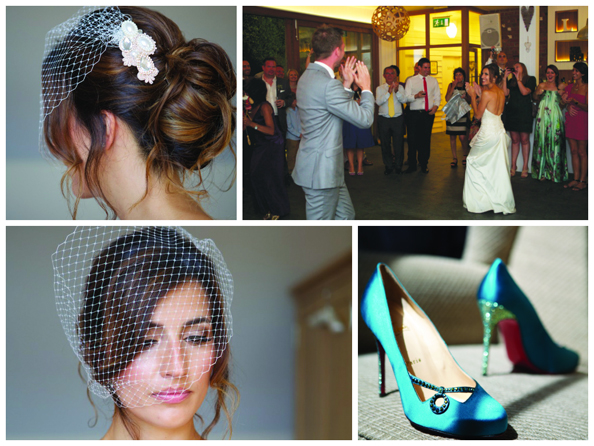 Dress: Alexandria’s bespoke mermaid-style gown was made by Anne Rashid at The Bridal Room.

Veil: The bride wore a birdcage veil from bettyandpearl.co.uk and accessorised it with an embellished hairclip from asos.com.

Bridesmaids: One of Alexandria’s closest friends of over 20 years, Katie Fennell, was maid of honour while Andrew’s niece, Jessica Lee, was bridesmaid. 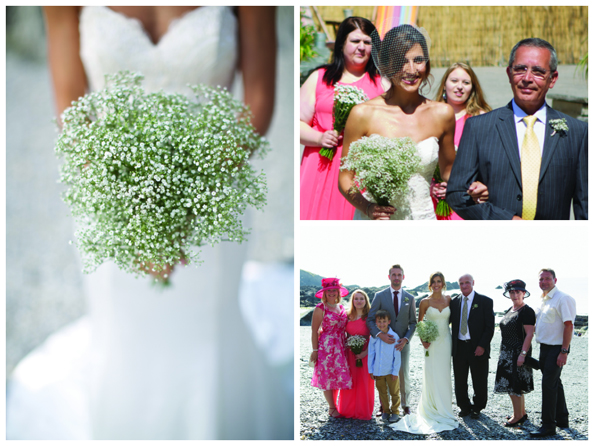 Flowers: Alexandria’s eldest sister, Melanie, made the bridal bouquet and the buttonholes using baby’s breath. The daisy bouquet for the bridesmaids and the chrysanthemum and billy balls arrangement for the table centres were made by Katie. All flowers were bought from the local wholesaler.

Music: The groom is a keen DJ and was the mastermind behind the entire playlist.

First dance: Alexandria and Andrew decided to honour the bride’s parents’ homeland and danced the Bailinho Da Madeira, a local folk dance which got everyone laughing and on the dance floor.

Food: In keeping with the laidback chic theme a gourmet BBQ was served ranging from homemade burgers to seafood skewers and halloumi salads. For dessert guests enjoyed Eton mess, white chocolate cheesecakes and lemon tarts. The couple also had a retro sweets table.

Favours: The real Madeira cake (bolo de mel) and Hungarian biscuits – a taste of both cultures. 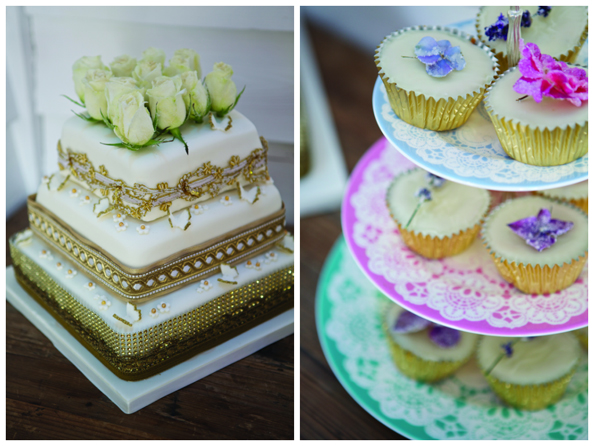 Unique touches: The couple decided to make most of the décor themselves from a runner with ‘Go on pet, be married’ stenciled on it to table plans set in a vintage frame and a rustic washing line holding photos of Alexandria and Andrew through the years. As an extra homage to Madeira, during the speeches guests were served the local liquor – poncha. 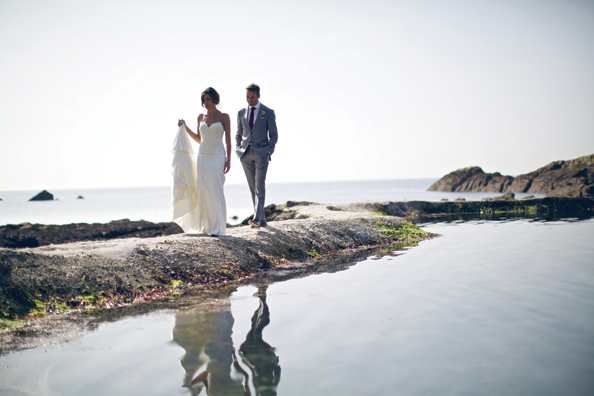 1. Do a speech! Sounds insane, and it is nerve-wracking, but it’s a lovely opportunity to say a huge thank you to those who truly deserve it.

2. Pick a photographer you are comfortable with. The husband and wife team for my wedding were not only friendly and professional but calming. Like having friends take your snaps. It will put you at ease.

3. The day really does go super fast so take in every moment and let people come to you. Don’t fret about who you have or haven’t spoken to, they’re there for you.

4. Give one of the groomsmen the duty to get your guestbook signed, otherwise people won’t remember

Stationery: All invites, order of service and table numbers were designed by Nicola Tatum, pario-one.com, nicola@pario-one.com