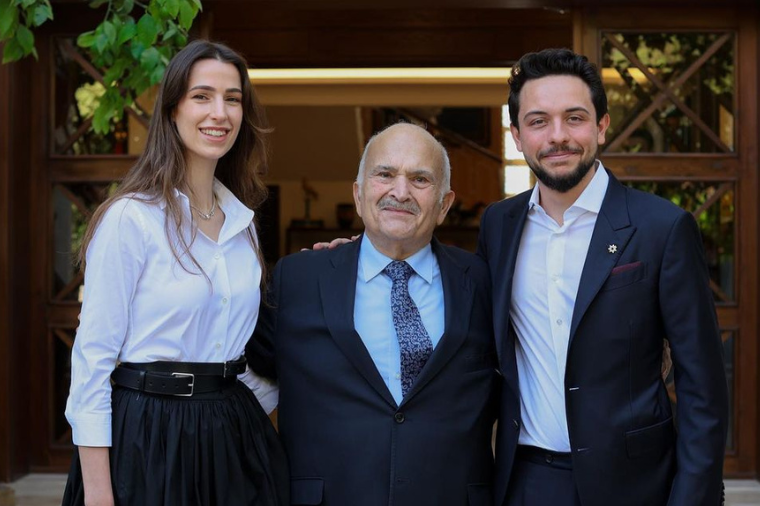 Rajwa Al Saif has made her first public official public engagement with her fiancé Crown Prince Hussein of Jordan.

The newly engaged couple stepped out together at the Royal Hashemite Court in Amman to view a series of exhibits detailing the country’s Hashemite history.

The Crown Prince of Jordan shared a few photos from his outing with his bride-to-be. The pair were also accompanied by his great uncle Prince El Hassan bin Talal, the brother of the late King Hussein and uncle of King Abdullah II.

“There is no one more knowledgeable than my great Uncle El Hassan when it comes to Jordan’s history and our Hashemite legacy,” Crown Prince Hussein said of his visit with his fiancée.

“Rajwa and I had the pleasure of viewing exhibits from Jordan’s Hashemite history at the Royal Hashemite Court today.”

For her first royal public appearance, Rajwa – who is from Saudi Arabia – wore a simple monochrome outfit – a black knee-length skirt with a white shirt and white-cream bag.

The couple announced their engagement a couple of months ago via a Twitter post from the Royal Hashemite Court in August. The post congratulated the couple and showcased a series of images of the family together to mark the special occasion.

With not just one but two engagements in the family this year, Her Royal Highness Princess Iman bin Abdullah II announced her engagement to Jameel Alexander Thermiotis in early July.

Both couples are reportedly set to marry in 2023.