Queen Rania: ‘We Need To Stop Thinking Of Refugees As A Problem’ 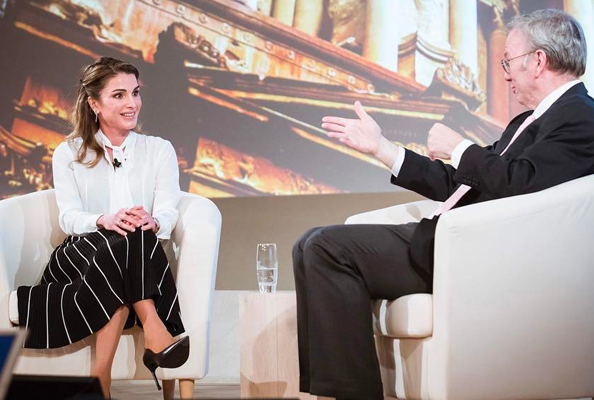 The royal speaks stirringly about Syria, education in the Middle East and Islamophobia at a Google event.

“The future of an entire generation of children hangs in the balance.”

That is the powerful message Queen Rania Al-Abdullah of Jordan delivered this week, as she took part in a Google Zeitgeist interview in the UK.

The royal chatted frankly onstage with Eric Schmidt, executive chairman of Alphabet Inc, in the British capital on Monday, where she touched on subjects including the refugee crisis and globalisation.

During the insightful discussion, HRH revealed the “real crisis in our region”; namely the 13 million children without schooling across the Middle East.

Around 40 per cent of the school age population is being deprived due to continuous conflict, Queen Rania revealed, as she called for an urgent redesign of education in the Arab world.

“We’re seeing disasters happen on scale, it’s time solutions did too,” she said.

13 mil. children in the MENA region are out of school. A whole generation’s future is hanging in the balance-at this year’s Google Zeitgeist pic.twitter.com/bHhzIaUpBO

The royal used the discussion as a chance to announce a new partnership between the Queen Rania Foundation for Education and Development and Google, which will create an online learning platform for Arabic open educational resources.

Queen Rania also spoke about the refugee crisis, remarking the world needs to “stop thinking of refugees and migrants as a problem and accept the movement of people as the new norm, a by-product of our current global order”.

The royal told attendees that “fear makes people cower from what seems ‘foreign’, and seek comfort in what feels familiar”, which should explain a rising tide of xenophobia around the world.

“If we let fear morph into a wholesale rejection of Muslims and Islam and let if factor into our policies and politics, we would be playing right into the hands of extremists, at a very critical time,” Queen Rania said.

However, despite the many crises the world is facing, HRH ended her discussion with a message of hope – particularly for her home country.

“We have defied all odds. Jordan is not only just standing, it’s trying to provide an example,” she said.