UP Next
X
In need of some perfect day-to-night pieces? We've found them...
Siobhan Downes
June 28 2018

One is considered the world’s most stylish royal, while the other is better known for her fashion faux pas than her wardrobe wins. But one thing is certain – both Her Majesty Queen Rania Al Abdullah of Jordan and Melania Trump know how to dominate headlines with their outfits.

The Jordanian royal accompanied King Abdullah II this week on an official visit to the White House, where the pair met with US President Donald Trump and the First Lady to discuss the peace process in Syria.

Naturally, all eyes were on the two women’s sartorial choices during the meeting.

Her Majesty wore pale pink satin trimmed crepe wide-leg trousers from ready-to-wear label Adeam, which she paired with a delicate pleated blouse in the same hue (also by the same label). The free-flowing ensemble was characteristically understated, yet regal.

FLOTUS opted for a leather wrap dress by New York-based label Proenza Schouler, in a slightly deeper blush. The feminine piece featured a belted waist and structured folds, like a piece of origami. Truly pretty in pink.

It was a close call, but Queen Rania takes it out for making this combination look so effortless. An inspired outfit.

This wasn’t the first time the pair have stood quite literally side-by-side in the style stakes. Queen Rania and Melania also met in April last year – only this time, they appear not to have co-ordinated their looks beforehand. 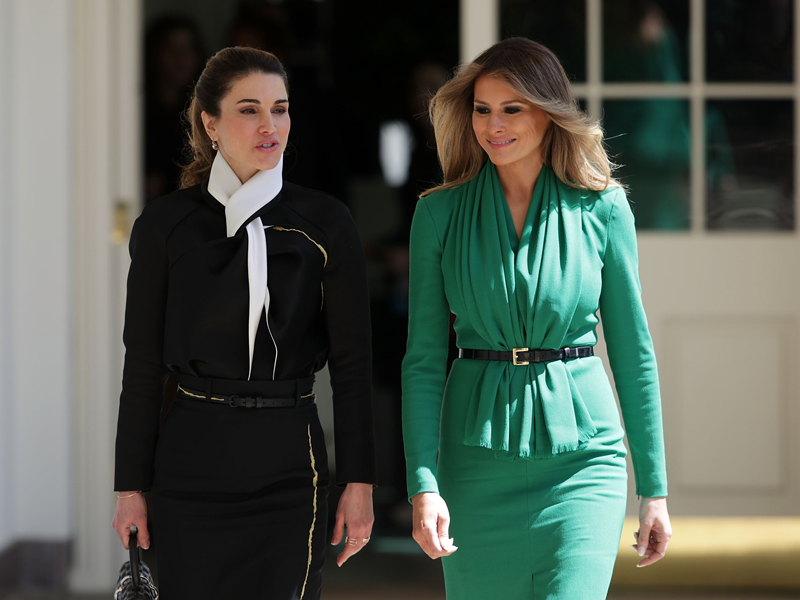 Melania chose an emerald green dress designed by Hervé Pierre, who was also behind her stunning ivory Inauguration Ball gown. To keep things modest, the First Lady incorporated a matching scarf, kept in place by a narrow black waist belt.

In an analysis for the Telegraph, fashion editor Bethan Holt wrote that Melania’s emerald dress may have been a respectful nod towards the royal, as green is one of the colours of Jordan’s flag. It’s the kind of careful consideration we wish Melania would put into all of her outfits – and for that reason, we’ll give her this one.