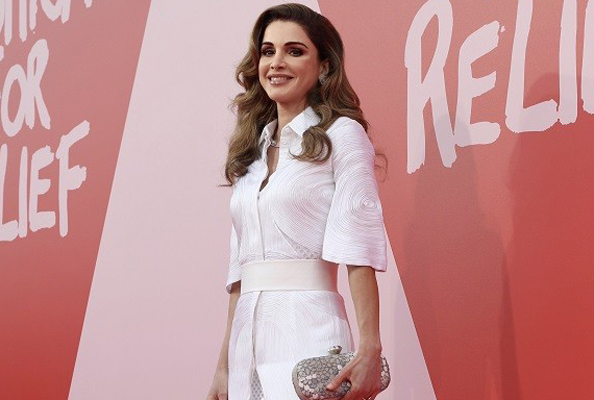 The royal drew attention to the plight of children who have known nothing but war in her acceptance speech.

She has long been a passionate advocate for the rights and needs of refugees, and now Queen Rania Al-Abdullah of Jordan has been honoured for her tireless campaign.

A humanitarian award was bestowed upon the royal in France on Sunday in recognition of her efforts towards helping children caught in conflict.

Queen Rania, who accepted the award in person at the Fashion for Relief gala in Cannes, used her appearance to draw attention to Jordan’s work during the refugee crisis.

“In my country, Jordan, we are on the front lines [of the Syrian refugee crisis],” the royal told attendees, adding that “one in seven amongst us is a Syrian refugee”.

“With about 90 per cent of refugees residing within host communities across Jordan, there has been an immense strain on the country’s public resources, infrastructure, and social services.”

Humbled to receive a humanitarian award from Fashion for Relief, which is supporting Save the Children’s Every Last Child Campaign this year pic.twitter.com/cp2ZB2IeNc

This year’s Fashion for Relief gala was held in support of Save the Children’s Every Last Child Campaign, a charity initiative that works to provide healthcare and education to children suffering from poverty and discrimination or displaced by conflict.

Though there are children, particularly in Syria, who have known nothing but war, trauma, and devastation, Queen Rania reminded the audience that there is also hope.

“Amid tragedy and loss, we see passionate people working together to deliver solutions,” HRH said.

“[The] global community is fragile and prone to breakdown. But events like this one remind us of its strength… and in that, we can find beauty, too.”

Read:
Steal Her Style: This Is Where Queen Rania’s Latest Looks Are From…
Queen Rania: ‘We Need To Stop Thinking Of Refugees As A Problem’

The gala, which was attended by around 500 guests, was organised by founder and spokeswoman Naomi Campbell, who roped in a number of fellow supermodels for a catwalk display on the night.

Heidi Klum, Natalia Vodianova, Bella Hadid, Kendall Jenner, Kate Moss and Campbell herself all took to the runway, with celebrities including Uma Thurman and Donatella Versace watching on in the audience.

Campbell, who founded the charity event in 2005, called in donations from fashion houses for the display, while singer Lauryn Hill put on a special performance.

@KendallJenner at #FashionForRelief during the #CannesFilmFestival wearing an #AtelierVersace evening dress featuring a mix of crystal elements and tulle manipulation.

The British supermodel visited a refugee camp in Jordan earlier this year, describing it as “a humbling experience because these people are not wallowing in self pity”.

“They’re not looking for handouts. They don’t want to leave their country in this way. They’ve left their home, they’ve lost their things, they’ve lost loved ones,” Campbell told Sky News.

Proceeds from the Fashion for Relief gala will now go to the Save the Children foundation, to provide food, aid, and shelter to children caught in urgent humanitarian crises and conflict.