‘Proud Of You Son’: King And Queen Of Jordan Praise Crown Prince 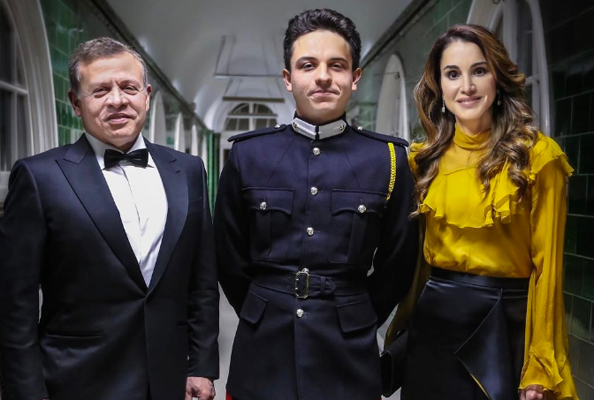 The royals accompany their eldest son to a military dinner.

To say the Jordanian royals are a tight-knit family isn’t a surprising statement.

King Abdullah II and Queen Rania Al-Abdullah regularly post touching tributes to their four children on social media, and always make time for a little date night (their Valentine’s Day dinner is proof of that).

And their latest post was further proof of the family’s admiration for one another.

Read:
Princess Haya Stole The Show In Sequins At The Dubai World Cup
Is This A First Glimpse At Lindsay Lohan’s Modest Fashion Line?

The King and Queen both shared praise for their eldest son, Crown Prince Hussein, as they joined him at a military dinner.

The 22-year-old is currently at the UK’s Royal Military Academy Sandhurst, the training facility for the British Army from which King Abdullah himself graduated.

The Crown Prince, who already holds the rank of first lieutenant in the Jordanian Armed Forces, graduated from the US’ Georgetown University with a degree in international history last year.

Now he’s following in his father’s footsteps at Sandhurst, where his proud parents jetted in for a company dinner this week.

Queen Rania shared a photo of the trio on Instagram, with Hussein donning his army uniform.

“Beaming and proud as any parent would be,” HRH captioned the shot.

Read:
Sheikha Mozah Has Been Giving Us So Much New-Season Inspiration This Week
Is Queen Rania Your Hair Hero? Well, Here’s How To Copy Her Look

King Abdullah also got in on the action, after launching his official Twitter page on Sunday.

“This is Abdullah bin Al Hussein, a father and a proud Jordanian. Pleased to be with you on Twitter,” the royal wrote in his first post.

His second he dedicated to his son, sharing an image of the two enjoying a chuckle at the military academy.

Seeing AlHussein in uniform reminds me of my Sandhurst days. Proud of you son pic.twitter.com/Y5yJ84PsRB

The King was later welcomed to the social media platform by Queen Rania, who said “your voice of moderation and calls for dialogue is much needed in our world today”.

Honored to be @KingAbdullahII’s 1st follower on @Twitter. Your voice of moderation and calls for dialogue is much needed in our world today https://t.co/helFb1xKj4

HH Sheikh Mohammed bin Rashid Al Maktoum, Vice President and Prime Minister of the UAE and Ruler of Dubai, also sent his well wishes to his brother-in-law, heralding his arrival to Twitter.