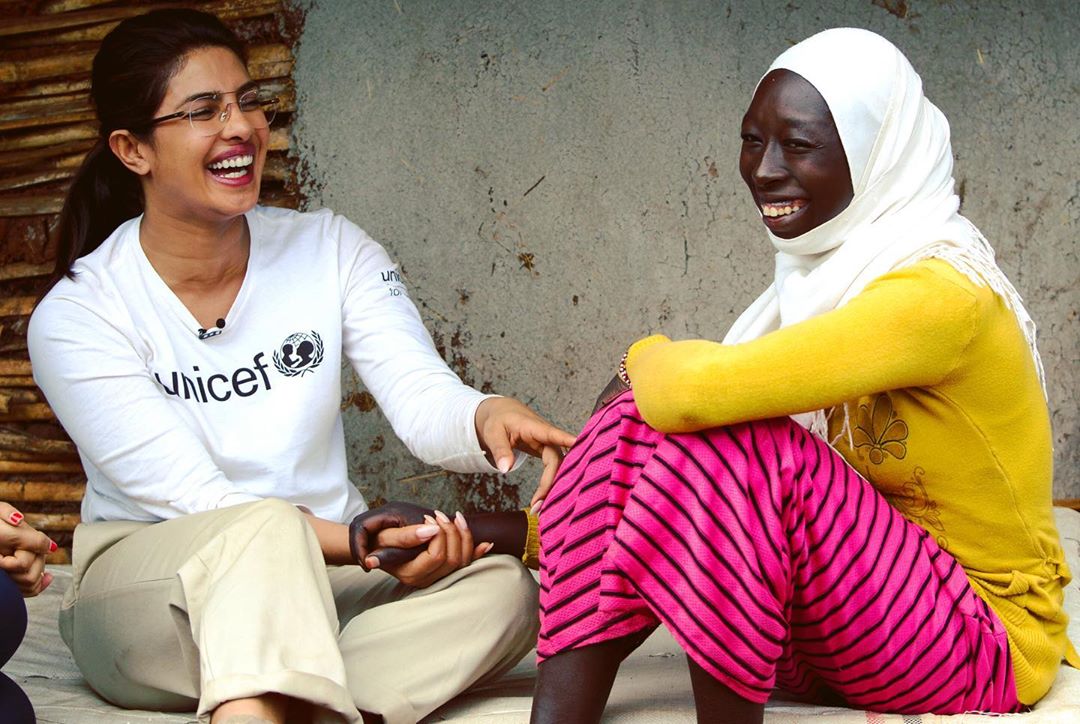 Inside her trip to Ethiopia with UNICEF

There is no stopping for Priyanka Chopra, who jetted to Ethiopia, straight from Cannes. This past week, the Isn’t it Romantic actress made her Cannes debut, and then stole the show with her husband Nick Jonas a day later. But, it is not all just glamour and parties for the Indian native, who traveled to Addis Ababa, fulfilling her commitments as Unicef Goodwill Ambassador.

Ahead of her trip, the 36-year-old took to Instagram stories to update her 40.5 million followers on her whereabouts. In a series of videos, Priyanka revealed that she is en-route to Ethiopia, and gave fans a background of her association with Unicef and how she wants to highlight it’s education programme. “I am in Ethiopia for a specific reason. I want to highlight Unicef’s education programme when it comes to children and youth in the country.”

“There is a huge barrier when it comes to access to education for children, especially because there are so many dropouts in school which begin as soon as kids start school. The primary education goes from Standard 1 to Standard 8, that is primary education. Secondary education is after that, we see dropouts of children even from first grade, so 50 per-cent of kids in Ethiopia end up dropping out,” Priyanka continued.

She shared some shots from her trip on Instagram stories, and then put up a detailed post of her first day there, as she visited the Sibiste Negasi Primary School in Addis Ababa. “In Ethiopia, primary school enrolment between 2000 and 2017 has TRIPLED. This is because of the Ethiopian government’s investment in education and its dedication to the future of the country…but there is still so much work to do,” she captioned her post.

“2.6 M children of primary and secondary school age are out of school, and 50% of children attending school drop out by grade 8. Because of poverty children are responsible for much more than just learning, like caring for siblings, walking miles to collect water and other house hold chores…things that should not be a child’s responsibility at any age. A child is a child. @unicef’s efforts, along with a very committed government, are focused on getting every child in school, ensuring every child has a quality education, and that every child completes school. Thank you Principal Abebech, Dagmawit (7th grade), and all the other students who made my first day in ethopia so special.”

While there, the Bollywood beauty had discussions with The Gender Club, which is a UNICEF supported program that empowers girls and boys. This club helps provide students with relevant knowledge and skills to help them combat harmful social practices, like gender based violence, child marriage, and sexual violence.

Seeing as Priyanka is a great dancer, it came as no surprise that some of her activities while in Ethiopia included dancing. On her stories, she shared videos dancing in one of the classrooms in school. Meanwhile, on her feed, she posted a picture of her doing the Kunama Dance, writing: “Dance is such an important part of Ethiopian culture. Wherever I have been so far…even though we don’t speak each other’s languages…the joy that has been shared through dance has bonded me with this amazing country forever. (Even though I’m terrible at it‍♀️) Ethiopia is extremely rich in culture and compassion. ❤️”

Of course, a trip to Ethiopia wouldn’t have been complete without a meeting with the country’s leader. Priyanka had the chance to meet Madam President Sahle-Work Zewde, the first female president of Ethiopia, which she described as an “honour.” In her post, the Quantico actress continued to praise the President, saying: “She has a global perspective for the development of her country – Ethiopia is the second largest host country of refugees in Africa, they’ve taken in just under 1M. She’s pushing for policies that provide people with access to education and other essential needs so they can improve their familial economic situation and hence the economy of Ethiopia. I’m so inspired.”

Priyanka’s visit to the African nation continued with a trip to the Bambasi Refugee Camp Primary School. The actress shared pictures of herself with the students, while highlighting some of the issues that they face. The school suffers from a shortage of trained teachers, with one teacher for every 89 students. She also went on to share the stories of two students from the Bambasi Camp: Hasina a 7th grade student and Abda Abdulaziz, who arrived at the camp in 2011.

Hasina, is a 15-year-old student, who loves to go to school. When she was 12, her sister’s husband was arranging her marriage to one of his friends, but Hasina escaped to a friends house and then to one of the community-based child’s marriage prevention platforms. The young student loves learning and wasn’t willing to trade her education or freedom for anything, which gave her the courage to stand up for herself. The community, along with the authorities, stepped in and stopped the marriage. The man was charged. Priyanka told her story, writing: “Hasina is a very brave girl. t was so heartening to see the elders in the community learning from the examples these young girls are setting, standing up against child marriage and female genital mutilation/cutting. Education gave these girls that perspective. This community is an example of how change is possible. FEMALE RIGHTS ARE HUMAN RIGHTS.”

The second story that the Baywatch actress shared was that of 26-year-old Abda Abdulaziz, who sought refuge from the war in Sudan. She gave birth to all of her five children in the camp, while her husband works as a labourer at a nearby farm. Priyanka got the chance to meet with two of Abda’s daughters saying: “I met two of her daughters, Zulfa Ata Ey, 8, and Muzalefa, 10, at the primary school I had visited earlier in the day. Zulfa is at the top of her class and her mom is so proud. While they’re safe and her children are receiving an education, they are still living below the poverty line, and she’s desperate for the most basic supplies…like water, books, and clothes for her children.”

The actress is urging her fans to follow her social media accounts, to learn more about the situation of refugees in Ethiopia. Moreover, after every post, she redirects her followers to UNICEF’s website, so they could learn more and help make a difference.

We can’t wait to see more of Priyanka’s trip!