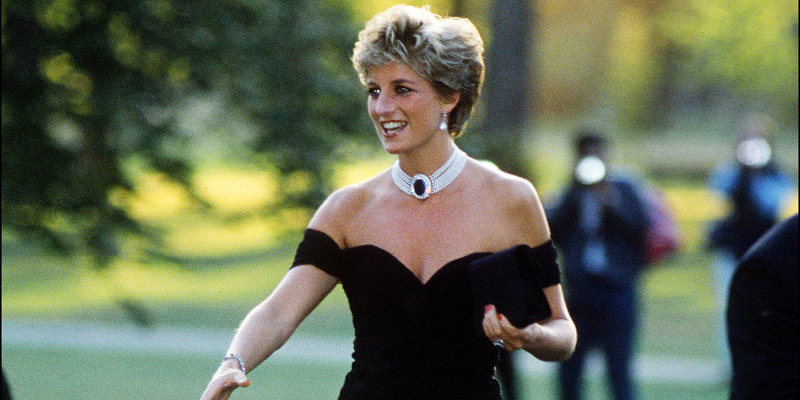 Princess Diana’s “revenge dress” made headlines to become one of fashion’s most iconic pieces and it’s now set to make a comeback in pop culture.

With the hit Netflix series The Crown currently filming its fifth season, actress Elizabeth Debicki, who is playing the late Princess of Wales in the show, has been spotted wearing a recreated version of the dress and fans have been blown away by the uncanny resemblance.

When Princess Diana first stepped out in the dress back in 1994, she was attending a Vanity Fair fundraiser dinner at Serpentine Gallery in London.

It was a different side to the princess anyone had seen previously, as she shattered the shackles of royal protocol in the scintillating off-shoulder black dress designed by Christina Stambolian.

We almost had to do a double-take at the paparazzi photos snapped on The Crown set, as the actress was the spitting image of the late princess. Fans were also enthralled by the uncanny resemblance between Diana and actress Elizabeth.

One fan drew a comparison with both the images showcased side by side saying, “The Revenge Dress. We all knew the Revenge Dress. Princess Diana wore it in 1994 after Prince Charles’ televised admission of his adultery with Camila. Now, #TheCrown is recreating it and Elizabeth Debicki did not disappoint. Can’t wait for Season 5!”

We all knew the Revenge Dress. Princess Diana wore it in 1994 after Prince Charles’ televised admission of his adultery with Camila. Now, #TheCrown is recreating it and Elizabeth Debicki did not disappoint. Can’t wait for Season 5! ❤️ pic.twitter.com/L6bAIRgwCb

Another fan tweeted “My jaw is on the floor at these pictures of Elizabeth Debicki filming in Diana’s revenge dress.”

Per reports, Princess Diana had originally planned on wearing a Valentino gown for the evening, however, after sketches had been leaked to the press, she then wore the dress which she previously deemed was too risqué.

As this headline-grabbing dress is remembered to date, the audience is beyond ecstatic with the identical recreation of this sophisticated silhouette.