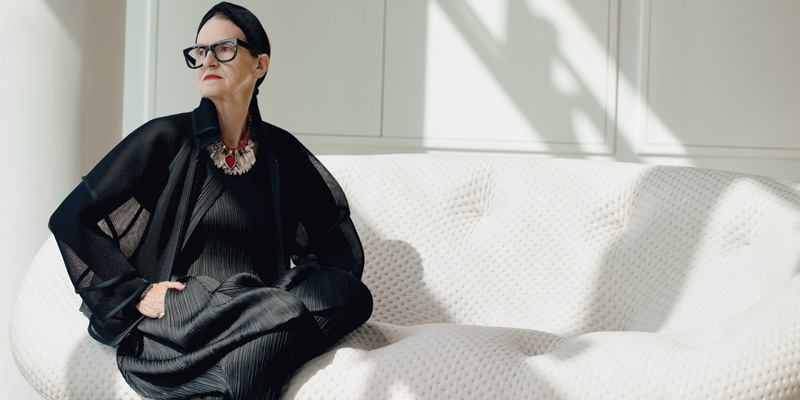 British artist and avant-garde aficionado Patricia Millns is one of the founding pioneers of the modern art movement in the region. She also has a lot to say…

“The Japanese aesthetic philosophies have been a very strong influence in my life, not necessarily because I chose to wear their clothes, but because of the general holistic sense of being.”

Patricia, 67, a fellow at the Royal Society of Arts in London and a resident of the Middle East for more than three decades, is a woman who knows who she is. “I tend to wear only black Issey Miyake. Its minimalism makes my life simpler.”

This is my third day meeting with Patricia and we’ve spent the last few days shooting this month’s cover story as a celebratory tribute to modern avant-garde. Such is her intellectual fervour and the pace of conversation, that my mind is dizzy from the fascinating stories she tells ranging from her early years in Kuwait then Oman and now her life in the UAE. She weaves in anecdotes of the art world, fashion and feminism, along with experiences that illustrate the diversity and depth of her connections. 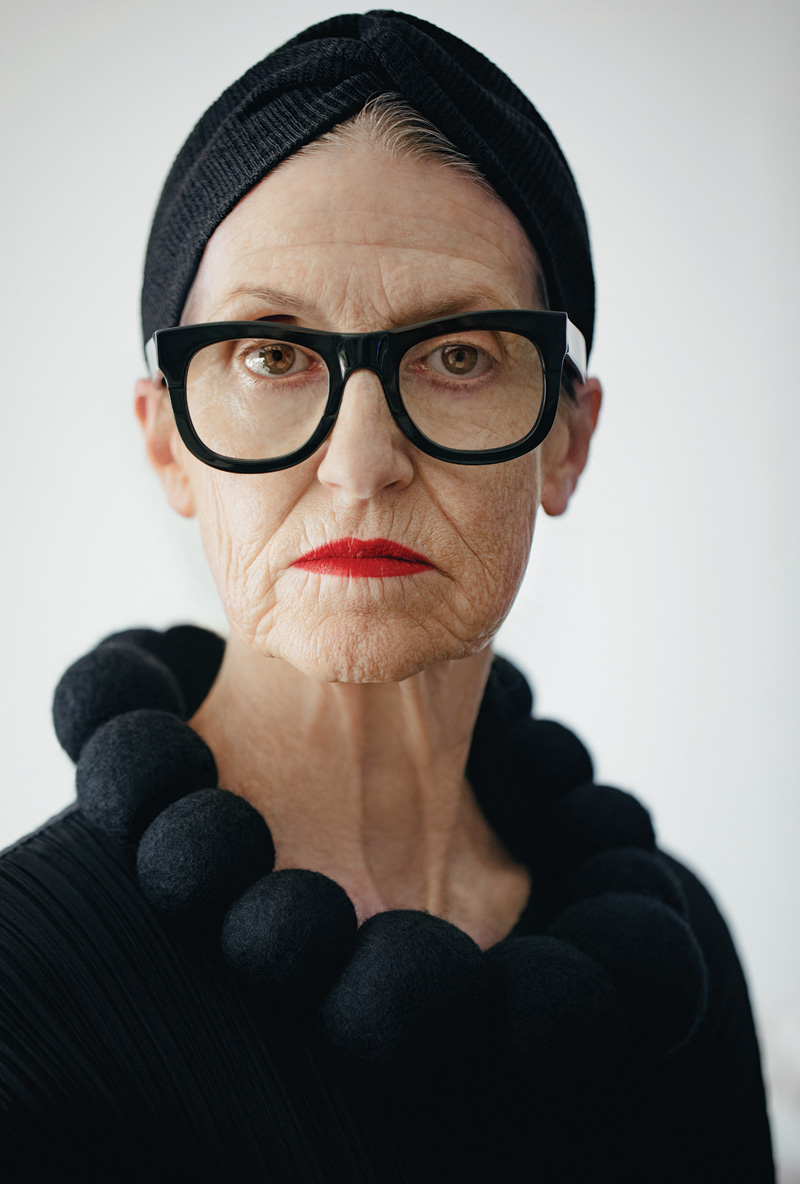 Patricia says she always had a fascination with the the UAE as it was forward-thinking and allowed people to try new things and be authentic.

“The Emirates Fine Arts Society based in Sharjah invited me to be a full member even before I came to live in UAE,” she says. “It allowed me the space to show larger installations and to work and show with likeminded artists from the Emirates. In the UAE I had logistical support and the super open city spaces of an urban environment that allowed me the freedom to try larger installations. That, coupled with the beginning of the international art scene, brought a new audience and collectors ready for more avant-garde works. 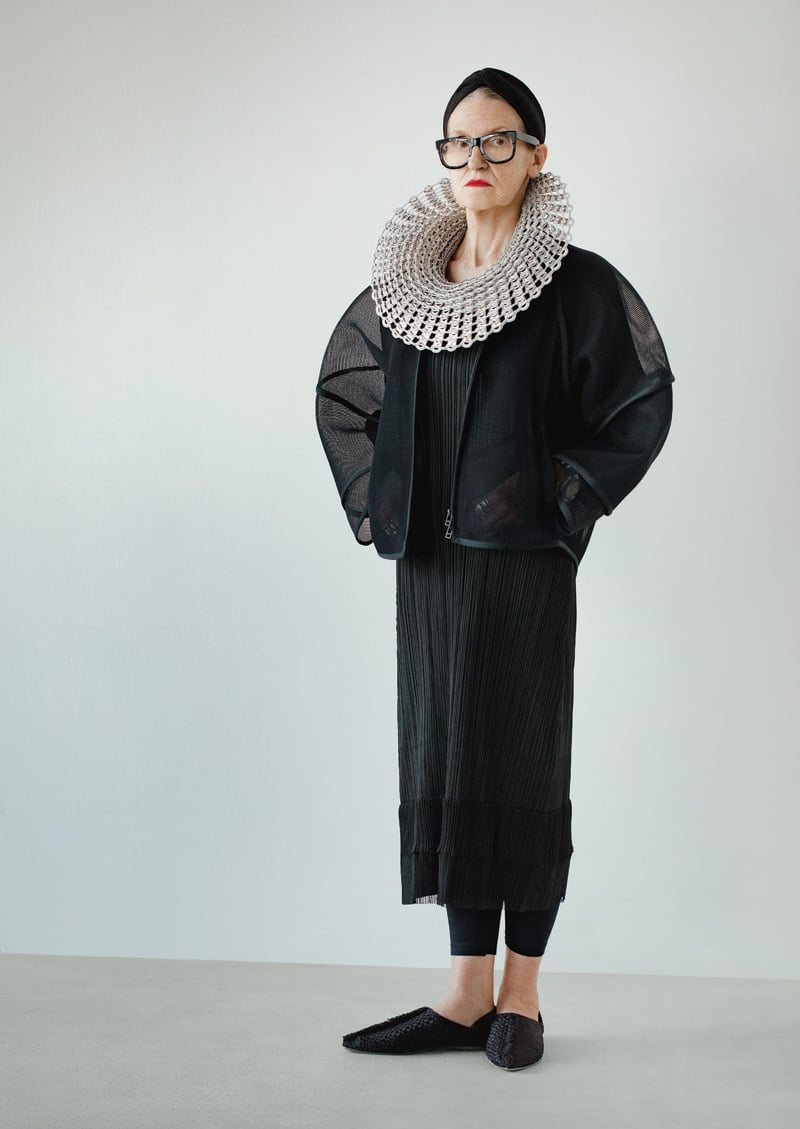 “Dubai was also very welcoming. The last 12 years have seen an explosion of art practices with the opening of the pioneering Tashkeel and the Gulf Art Fair (now Art Dubai), the auction houses and the influx of collectors.  The rise and development of Dubai Culture and all it provides for the arts encouraged  the  growth of galleries initially in DIFC, then Al Serkal Avenue. With the Design Fair and Dubai Design District (d3) and everything developing there in arts and fashion it is just an amazing time to be involved in the creative industries.

“I was honoured to be one of the first Ambassadors for d3. Art, design and fashion are moving so fast. 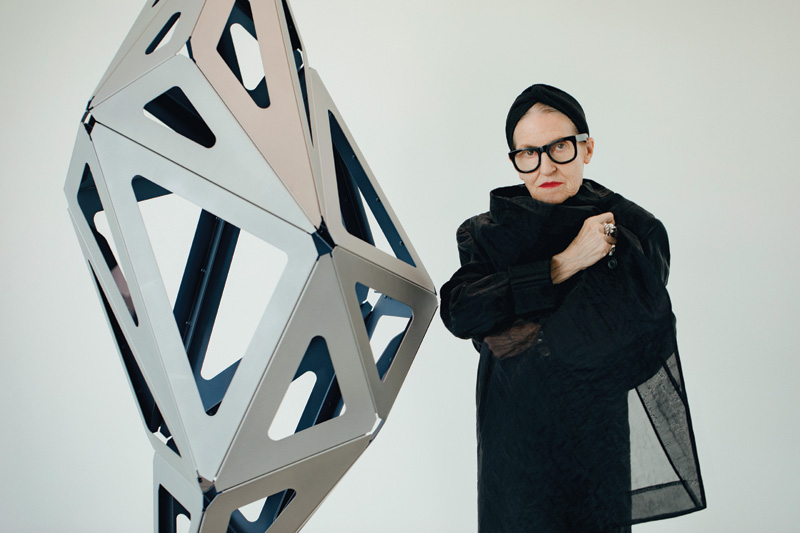 “Sharjah had a great Art Museum but with the development of Sharjah Art Foundation a new standard for artists was set and a different kind of space to show contemporary art works. The revamping of the Sharjah Biennial gave this region a truly international standard Biennial that attracts international curators, artists and art professionals.

“The concept of the avant-garde works well in the UAE as it is a place to try out the new and take risks. The Ministry of Culture allows new development and support that I couldn’t even think possible a few years ago. The development of a creative youth culture and the new paths in art and design with government support are superb. The future is assured.” 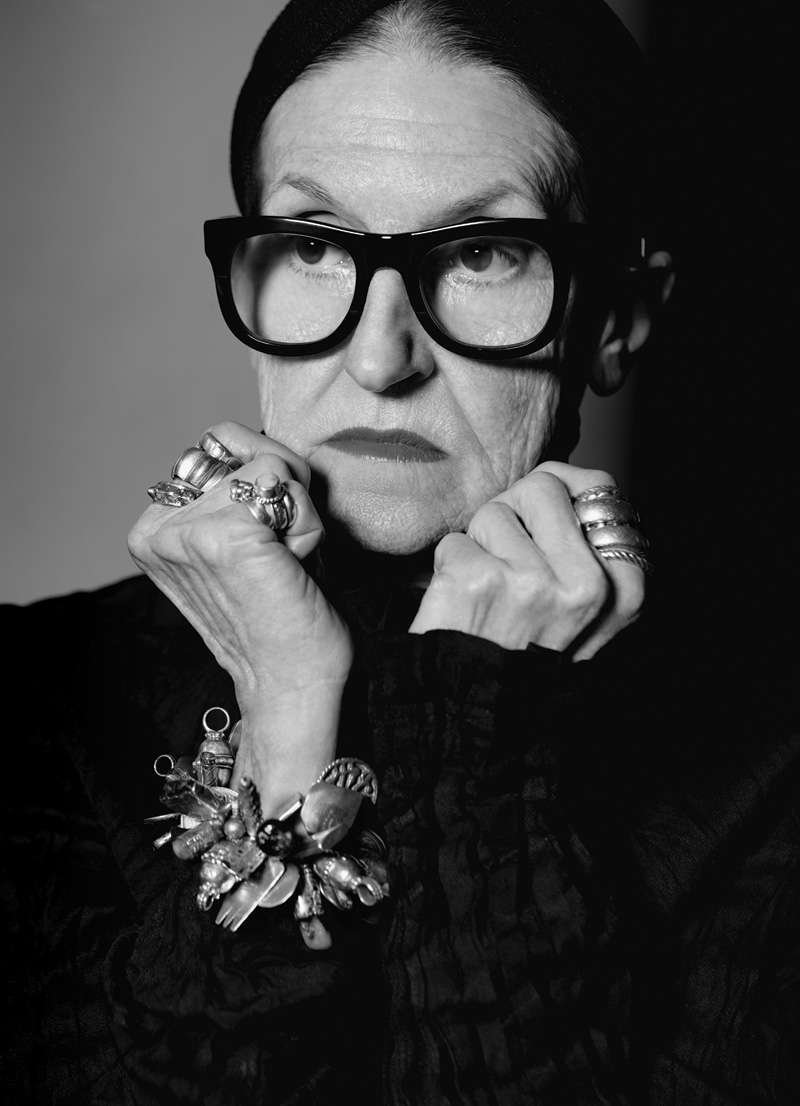 Patricia points out that the influences of her own work over the past 37 years has been Arabia, its multiplicity of imagery and the people here.

“The people of Arabia, especially the women I meet, have given so much to me to inform my practice and to allow me to grow as an artist and as a woman with such freedoms. This, coupled with the concept of space as substance and the deeper spiritual meaning that lies beneath the surface illusion, inform my practice.

“Repeated images and the use of clothing as identity form the basis of my installations in a very minimal simplistic way. As I have grown older my work gets more minimal to the point where I rarely use any colour preferring to only use white paper, pencil and simple threads of cotton or steel mesh.” Patricia’s installation work has been informed by the stories of the people she has known in the UAE for the last 12 years.

“As I mentored young artists my understanding of the culture here in the UAE developed and grew.  I had met many Emirati artists in Kuwait in the 80s and in the UK in the 70s. The synergy for a more intellectual viewpoint shifted in my work as I resided here. My clothing, my lifestyle, my studio all reflect my art. The clothing of Issey Miyake was a natural progression to my practice.

“The fashion of Japan had a simplicity of form and palette that spoke to me. I grew up in 50s with the New Look and then the crazy colour of the 60s. But when I saw Miyake’s clothes I knew this was about more than the clothes.  It was about the space, the interval between the clothes and me as the wearer. It considered the awareness of forms. The Japanese designers Issey Miyake, Yohji Yamamoto and Rei Kawakubo have influenced future generations of designers to take these risks. 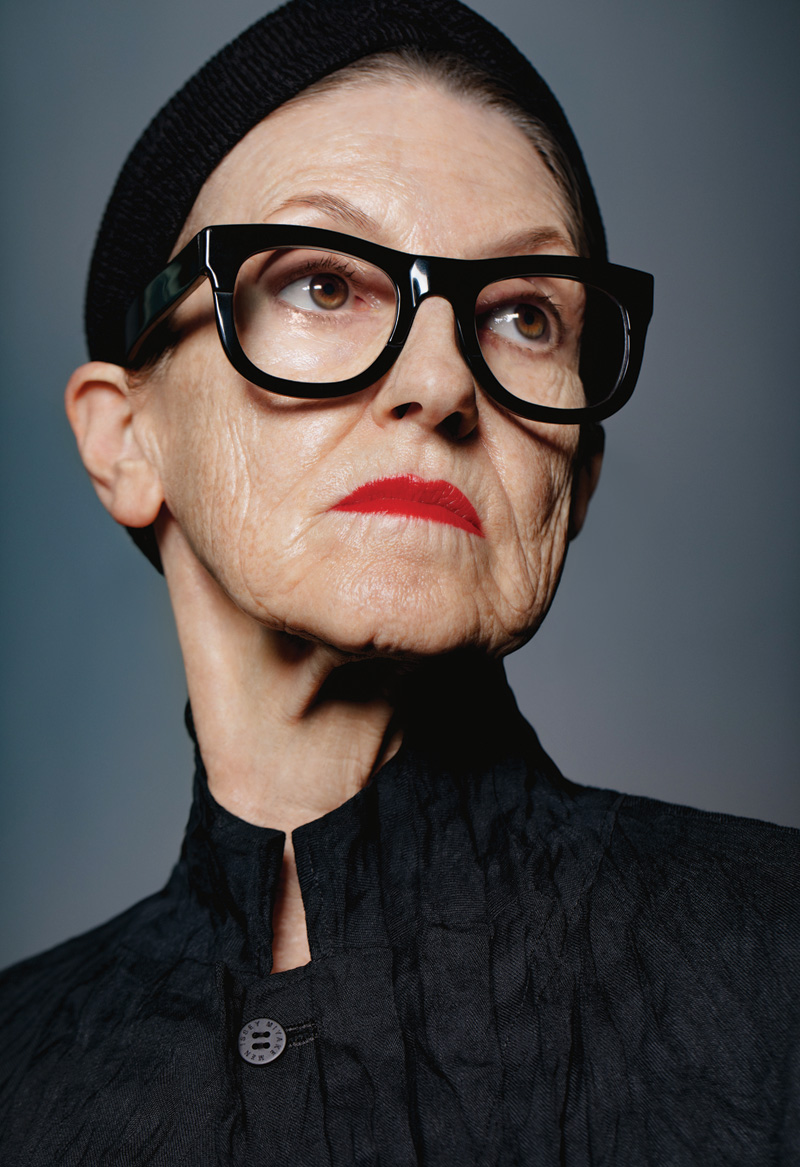 “In the 60s and 70s the music of John Cage and Phillip Glass informed a generation of musicians  and performers and later the work of Zaha Hadid, Rem Koolhaas  and Frank Gehry show that boundaries are meant to exist in the abstract only to be broken through. I was influenced by the avant-garde in its many forms in my own practice.”

The conversation turns to the youth of the Middle East today and I asked Patricia her thoughts on the local street style.

“There always will be avant-garde as we are always moving forward only now so rapidly… the street art movement, the wearing of sportswear as daywear. The youths of today are dressing for themselves, they’re stepping outside of couture being the only thing  and taking risks. Avant-garde continued with subcultures like  punk and now hip-hop. Sole DXB is something not to miss… 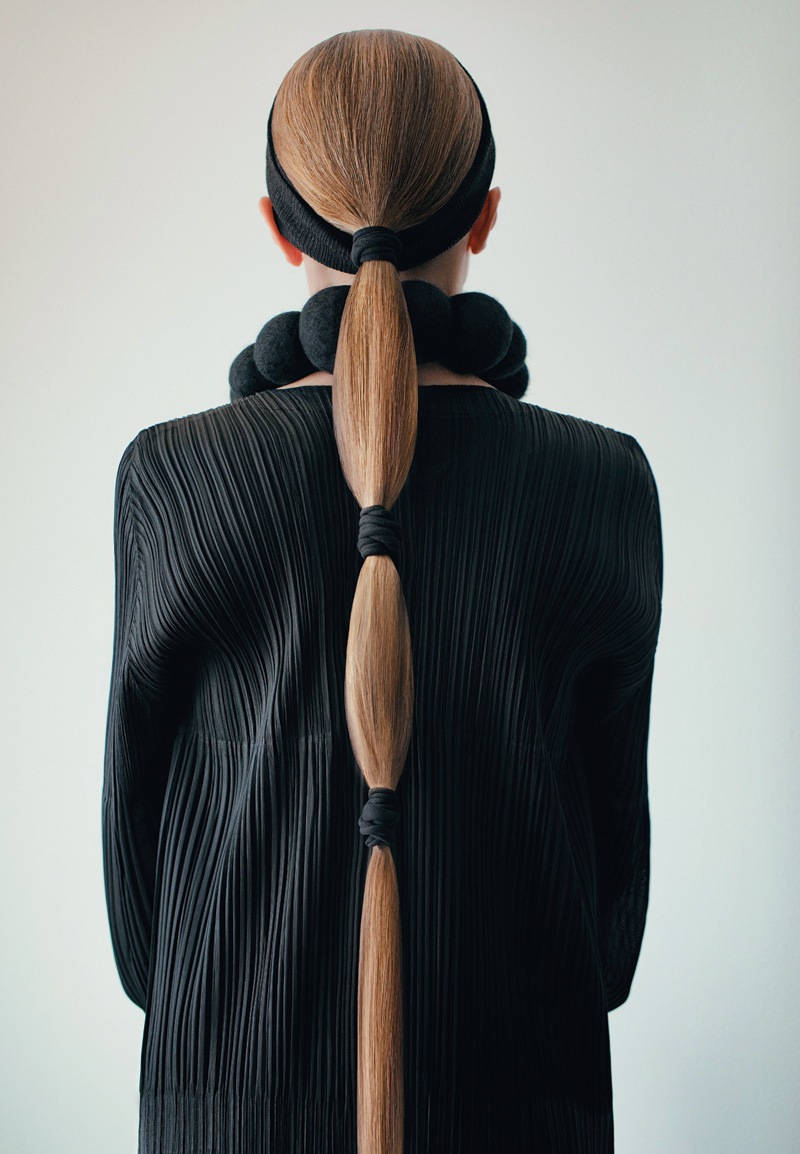 “I look to the next generation to see what they are doing and I think it’s fabulous to see the UAE putting so much attention on street art and all the programmes that assist the emerging artists and designers. It is in the next generation being given their chance to excel that we move forward. I prefer to mentor and encourage young artists than remain in the spotlight. I learn far more than I give! The UAE has so many young people in government, business and creative industries. It’s an exciting time to be here as an artist.”

Originally coming to Kuwait in the 80s from her native UK, Patricia resided there for 10 years. She showed her work with the prestigious Sultan Gallery.

“Kuwait was the base to study and travel around the Arab world. The Al Sabah collection at the National Museum was a great starting point for me. The generosity of the women I met there who shared their stories and lives with me in the Majlises inform my practice to this day…”

Patricia photographed the results of the Gulf War for the Kuwaiti Government and the traumatic period caused a move to Oman. There she did further study on  jewellery, textiles and the olfactory heritages of Oman. She was inspired by the rich style of its traditional clothes and the overwhelming diversity of cultural styles. 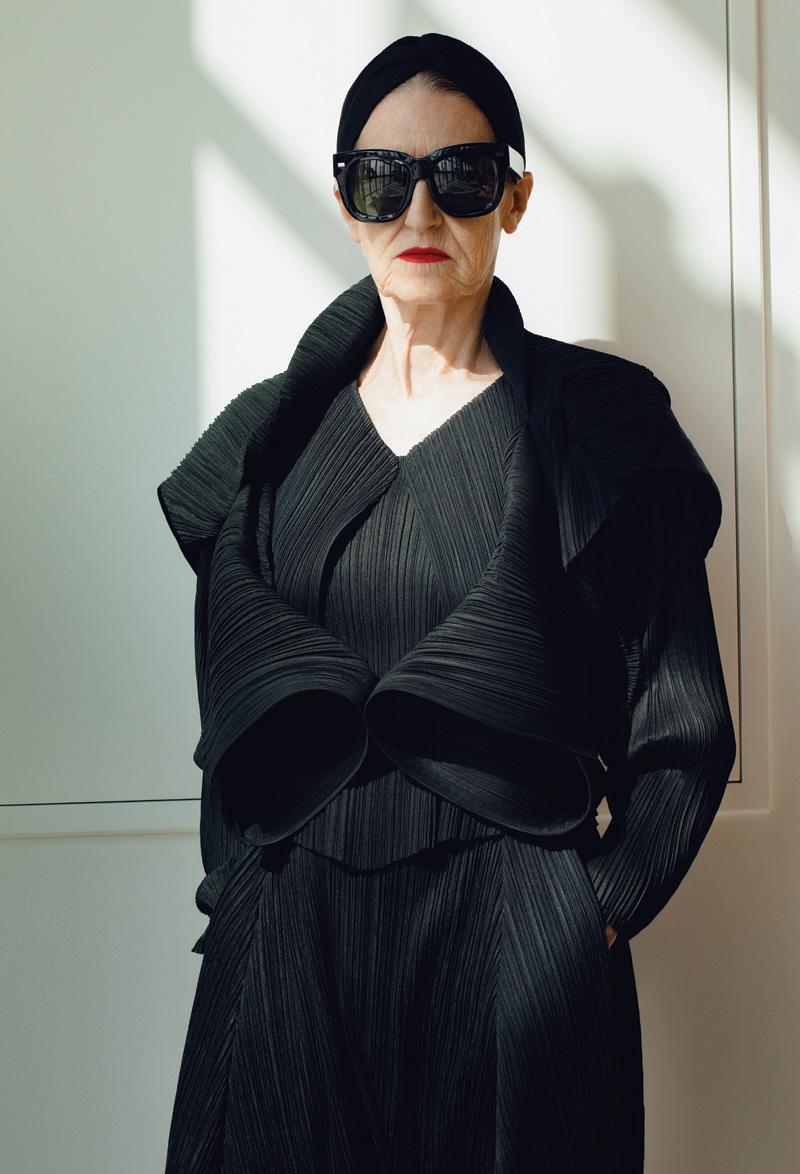 “Back then it was a riot of colour,” she says. “I travelled all over the country from Musandam to Salalah, from deserts to mountains and to the sea and I continue to do so. I became very involved in collecting adornment objects and here was a new world to explore and study. A residency in the autumn will allow me time to do a more precise body of work on the significance of clothing and fragrances.”

As Patricia twirls her collection of stacked silver rings, she offers something very personal.  Each one has been given to her by a friend, or even one by a stranger on a remote island, each embodies its own  memory. It becomes apparent that these items are of real sentimental value, filled with stories of her life in the region.

Our conversation brings us to a topic of high social currency, as I asked her about her experiences on being a woman in the Arab world. Historically, women in her native England had to fight for their rights, and are still fighting, and I wondered if it had been a different experience for her in the Middle East.

“Before I came to the region, I was nervous about the idea that I may be with women all day. The art world of the UK in the 70s was very male dominated. Instead I found myself within the luxury of female company that I didn’t know existed. To learn from very powerful women how to assist other women through crisis, to share talents, to give and more importantly to take advice when needed.

“The people of Arabia especially the women through their kindnesses have made my life a true joy. I learned a lot and am still learning from these women today.”