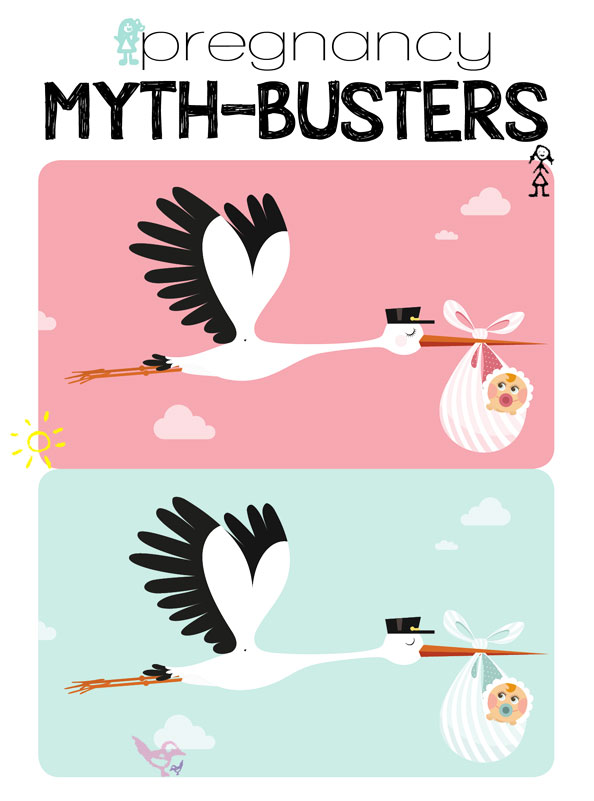 Does morning sickness mean you’re having a girl? Is heartburn is a sign of a hairy baby? EW mini reveals the truth behind the old wives’ tales.

THE MYTH: IF YOU CARRY YOUR BABY LOW, IT WILL BE A BOY

Only your baby’s size and position in the womb determine how you carry him or her – and it has nothing to do with whether the baby is a boy or a girl. If your baby is on the larger side, you may carry it higher, and during the later stages of pregnancy, the baby’s head drops lower into the pelvis in preparation for delivery, making it seem as though you are carrying ‘low’. Neither of these positions is any indication of gender.

THE MYTH: MORNING SICKNESS MEANS YOU’RE HAVING A GIRL

New studies are coming to light that could link acute morning sickness (or hyperemesis gravidarum) to female babies. One study found that 56 per cent of women admitted to hospital with morning sickness eventually gave birth to a girl, and another links morning sickness to elevated HCG (human chorionic gonadotrophin), which is a suspected symptom in women carrying female foetuses. However, both of these studies are in their infancy, and so there’s no definitive answer.

THE MYTH: PREGNANT WOMAN SHOULD EAT FOR TWO

Carrying a baby only requires an extra 300 calories per day, so technically you should be eating for one and one-fifth. The average woman should gain 25–35lbs during pregnancy – any less can be dangerous for your baby’s health, and too much more could cause you to have a larger baby, which could put the child at risk of diabetes and obesity later in life.

THE MYTH: RECURRING HEARTBURN MEANS YOU’LL HAVE A HAIRY BABY

Heartburn occurs commonly in the later stages of pregnancy as the growing baby pushes the stomach into a position where it’s easier for stomach acid to escape into the oesophagus. However, researchers at Johns Hopkins University have discovered that the same hormones that control the basics of heartburn-related illnesses also correspond to hair growth in foetuses, so there may well be a correlation.

THE MYTH: EATING FISH IS DANGEROUS DURING PREGNANCY

Seafood is a great source of protein and iron – crucial nutrients for your baby’s growth and development. In addition, omega-3 fatty acids in many fish can promote your baby’s brain development. However, some seafood contains high levels of mercury, which is dangerous for the baby. Check with your doctor which fish you can eat, and avoid all raw fish – so no sushi.