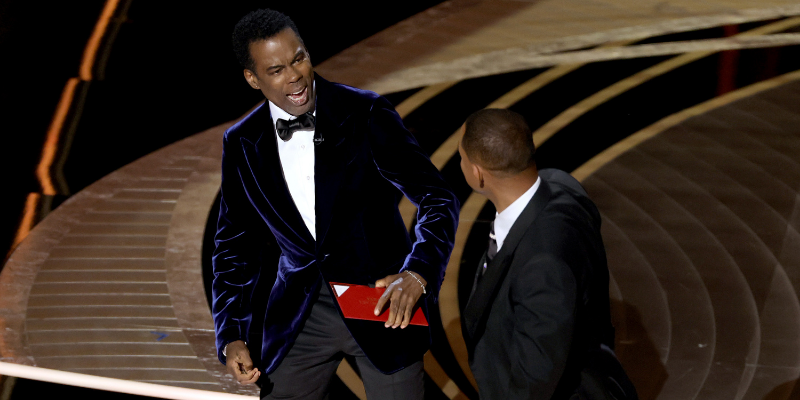 This year marked a big return for the Oscars.

It was the first time in three years there was an official host, it was the biggest instalment for the Academy since the pandemic began and, naturally, the drama came in its masses.

Presenting the award for Best Documentary was comedian Chris Rock who delivered a short monologue before the scheduled announcement of the winner, however, it was during his quick skit that some of his jokes didn’t go down too well.

In the monologue, the presenter went on to make a joke about Will Smith’s wife, Jada Pinkett Smith. Commenting on Pinkett Smith’s current bald hairstyle, Rock said, “Looking forward to seeing you in GI Jane.” This quip refers to how in said movie, the character, played by actress Demi Moore, shaves her head.

However, it’s clear the jibe did not go down well as Smith took to the stage, slapping the comedian in front of the entire audience and on camera.

“Keep my wife’s name out of your f—ing mouth,” he added when returning to his seat.

Will Smith just punched Chris Rock and told him "keep my wife's name out of your f***ing mouth" pic.twitter.com/1f1ytdbMRv

While the initial thought this may have been scripted, it’s clear this was anything but, as Rock appeared shaken on stage.

Shortly after the altercation occurred, Smith took to the stage again, this time to accept the Oscar for Best Actor in his critically-acclaimed film King Richard, which displayed how Richard Williams, father of tennis stars Venus and Serena Williams, led his girls to greatness on the tennis court. It marked the first Oscar win for the actor, but was perhaps overshadowed by the unforeseen events.

Will Smith’s acceptance speech as he wins his first ever #Oscar pic.twitter.com/qKVTOb7V6Q

“Richard Williams was a fierce defender of his family. In this time in my life, in this moment, I am overwhelmed by what God is calling on me to do and be in this world,” he said.

Acknowledging a conversation he had had with fellow actor Denzel Washington a few moments prior, Smith said he wanted to be “a vessel for love”.

“Denzel said to be a few minutes ago, at your highest moment, be careful, that’s when the devil comes for you,” he said. “I want to be a vessel for love.”

The actor ended his speech thanking the Williams family and the cast and crew of King Richard, but he also issued a short apology.