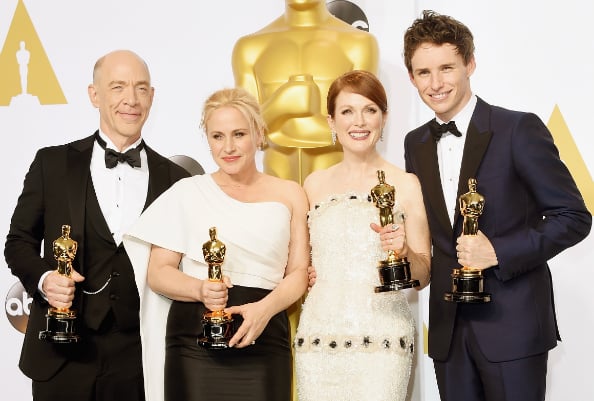 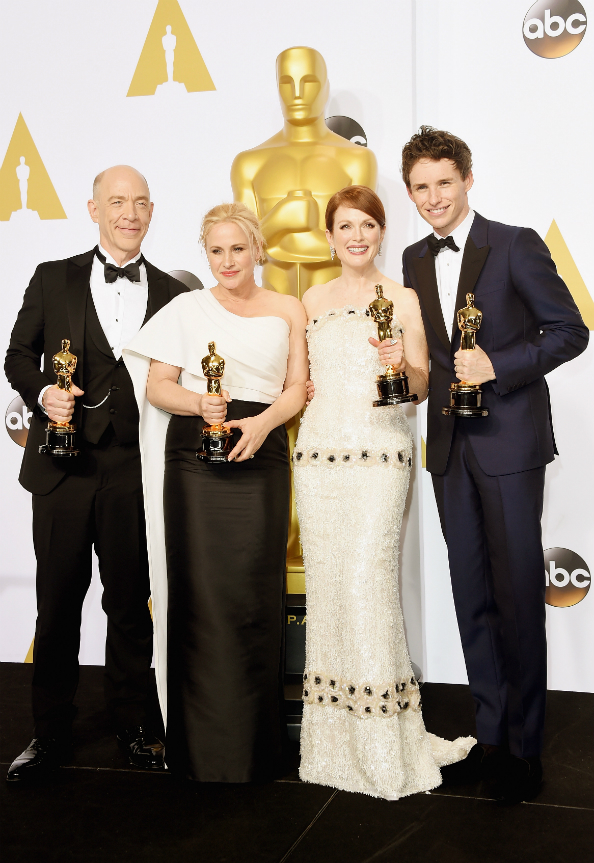 Meryl Streep and Jennifer Lopez whooped in unison, Patricia Arquette called for equal rights in Hollywood and John Legend had the audience in tears with a heartfelt Glory performance. It is fair to say the 87th Academy Awards, aka the Oscars 2015,  was a powerful affair.

Taking place last night at the Dolby Theatre in Hollywood, Los Angeles, the 87th Academy Awards (Oscars 2015) is the biggest event on the Hollywood calendar, or as Gone Girl actress Rosamund Pike describes it – “the grand finale.”

While we do celebrate the best-dressed on the red carpet – how could you not with the world’s most exquisite gowns on display? – Reese Witherspoon joined other leading ladies including Lupita Nyong’o and Cate Blanchett to support the #AskHerMore campaign, where they encourage media to ask more intellectual questions before jumping into “who are you wearing?”

“[The campaign] is meant to inspire reporters to ask creative questions on the red carpet,” said Reese, who was fed up of always being asked, ‘Who are you wearing?’. “I love the Oscars AND fashion like many of you – and I am excited to share #WhoAmIWearing later tonight just not yet!! But I’d also love to answer some of these questions … And hear your suggestions?!”

She later added: “We’re more than just our dresses… we are so happy to talk about the work we’ve done.”

Also using the Oscars as an opportunity to speak out about matters close to her heart was Patricia Arquette, who, when accepting her award for best supporting actress for Boyhood, called for equal rights and equal pay for women.

She said: “To every woman who gave birth. To every tax payer and citizen of this nation, we have fought for everybody else’s equal rights. It’s time to have wage equality once and for all, and equal rights for women in the United States of America.”

Equal pay is as controversial subject in Hollywood. The recent Sony hacking scandal revealed the large disparity between the pay of women and men in the industry. For example the male stars of American Hustle received nine per cent of the film’s profits while Amy Adams and Jennifer Lawrence only received seven per cent.

Clearly an issue that bothers film veteran Meryl Streep, the award-winning star whooped and preached to Patricia Arquette and was cheered on by Jennifer Lopez – hands down our best moment of the night. 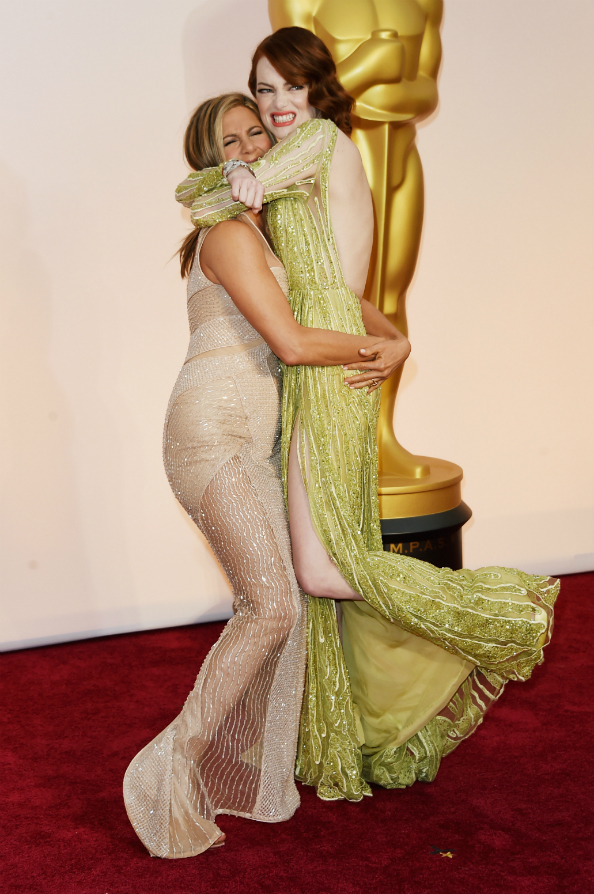 Other fun moments came when Jennifer Aniston tried to lift diminutive star Emma Stone in the air while presenter Neil Patrick Harris, also kept the audience in high spirits despite being nervous taking over from last year’s host, Ellen DeGeneres.

He said: “How do you try to beat the selfie that broke the Internet? It turned out to be a great thing. Selfie’s into my brain, so I’m gonna try to do something better.”

However, not to be outdone by Ellen’s 2014 efforts, many a celebrity took to Instagram to start their on Oscars trend. 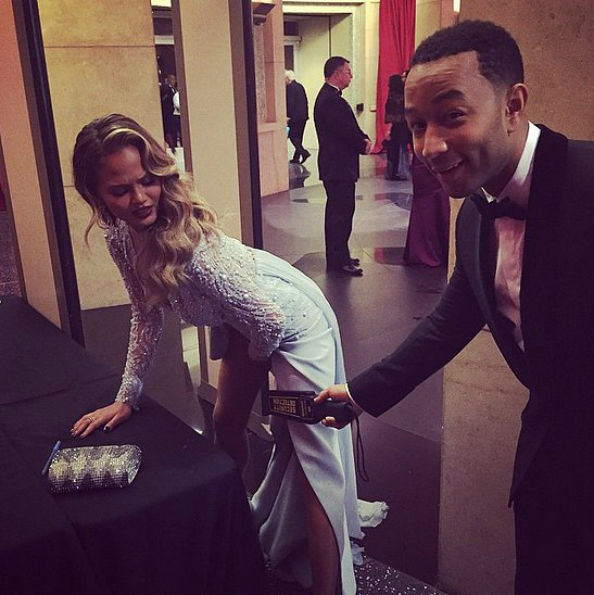 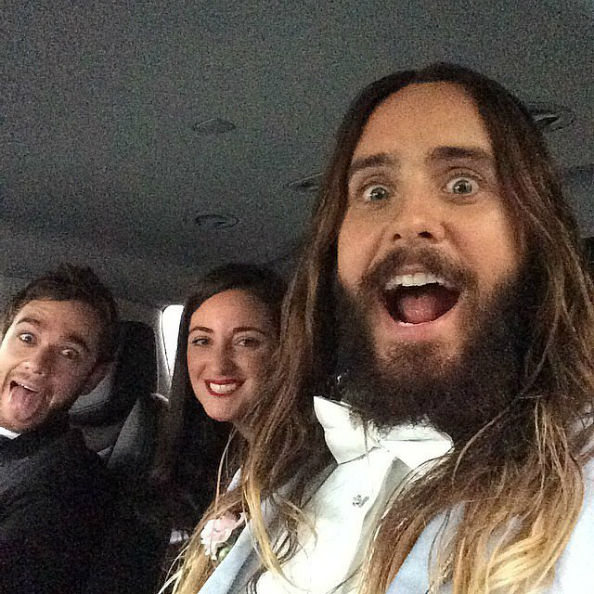 Jared Leto, who was in the initial selfie, didn’t want to miss out on the 2015 action. 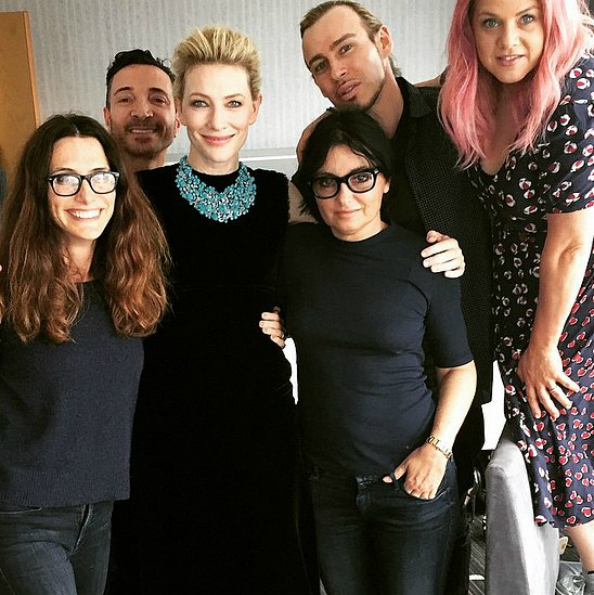 Cate Blanchett with her glam squad… 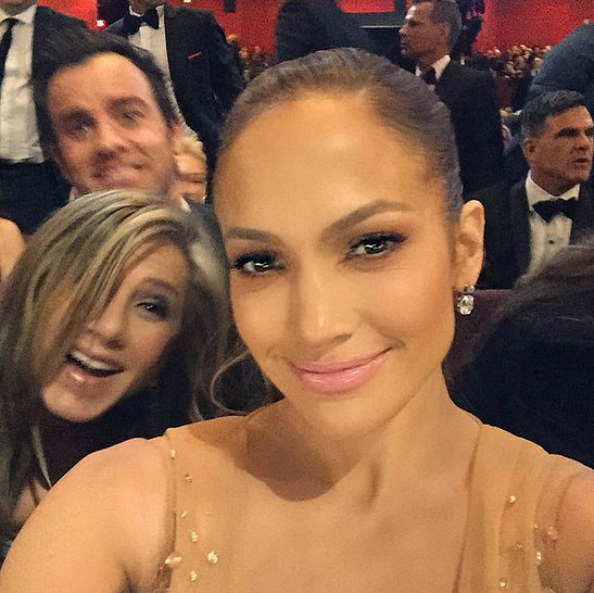 …but our best by far has to be Jennifer Aniston and Justin Theroux photobombing Jennifer Lopez.

However, it was Lady Gaga that ‘broke’ Twitter not only for her medley of the Sound Of Music tunes on stage (to celebrate the films 50th anniversary), but also thanks to her wacky ensemble. The look caused a frenzy on social media akin to that of Angelina Jolie’s leg in the 2012 Oscars. 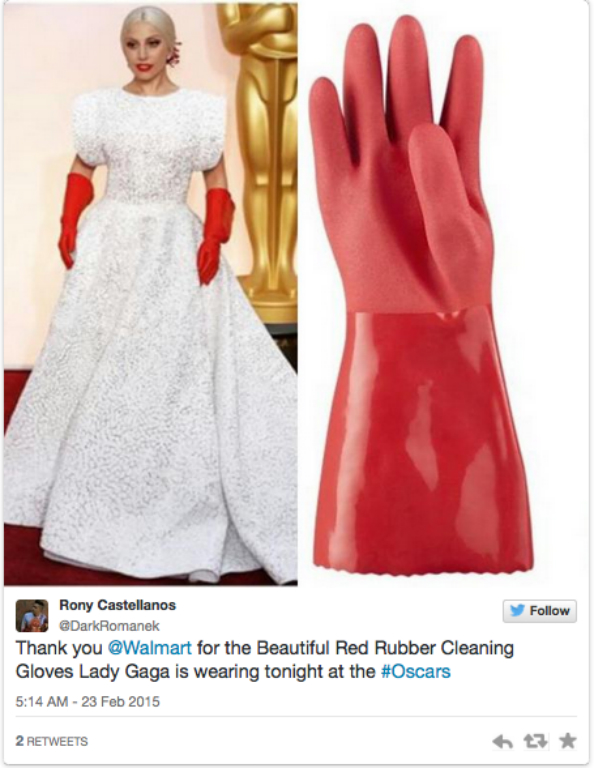 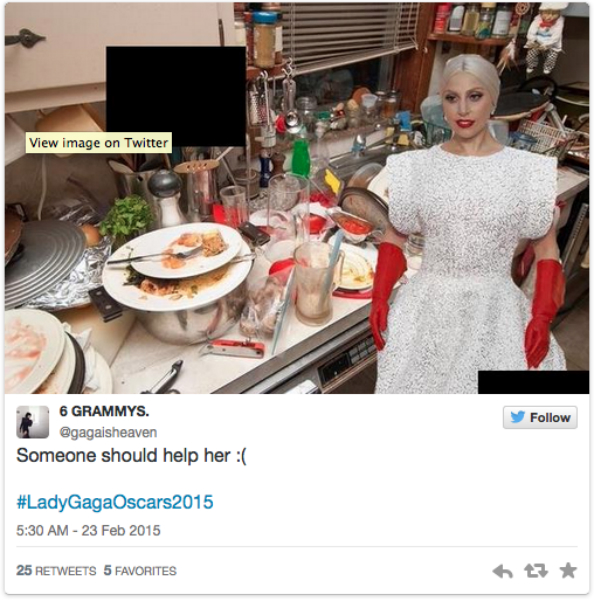 Her Sound Of Music tribute:

Back to the speeches and Best Supporting Actor JK Simmons, for Whiplash, urged people to cherish their parents, saying: “Call your mum, call your dad. If you’re lucky enough to have a parent or two alive on this planet, call ‘em. Don’t text. Don’t email. Call them on the phone. Tell ‘em you love ‘em, and thank them, and listen to them for as long as they want to talk to you.”

Julianne Moore finally picked up the gong for Best Actress – she has previously been nominated four times. The star won for her role as an Alzheimer’s patient in Still Alice. In her acceptance speech she raised awareness for Alzheimer’s and also joked at how winning an Oscar apparently adds five years to your life expectancy. Eddie Redmayne is shocked to win the Best Actor Oscar, which was presented to him by Cate Blanchett

Big winner of the season was Eddie Redmayne, who completed his collection of gongs collecting the Best Actor award. He also used his speech to speak up about ALS. The adorable newly wed made a heartfelt tribute to Stephen Hawking, who he portrays in The Theory of Everything, and discussed the battle in raising awareness for the disease suffered by the professor. He said: “I don’t think I’m capable of articulating quite how I feel right now. This belongs to all of those people around the world battling ALS. It belongs to one exceptional family – Stephen Jane, Jonathan and the Hawking children. And I will be its custodian. And I promise you I will look after him.”

The actor promises to now take his new wife on the honeymoon she has been waiting for.. sweet!

While Selma didn’t win big (it only won one award for Best Original Song for Glory), the movie that recounted the voting rights marches led by Martin Luther King’s wasn’t forgotten. Not only did songwriters Common and John Legend give powerful speeches but their performance of the song not only received a standing ovation but left most of the A-list crowd, including the film’s lead star David Oyelowo as well as Oprah Winfrey and Chris Pine in tears. 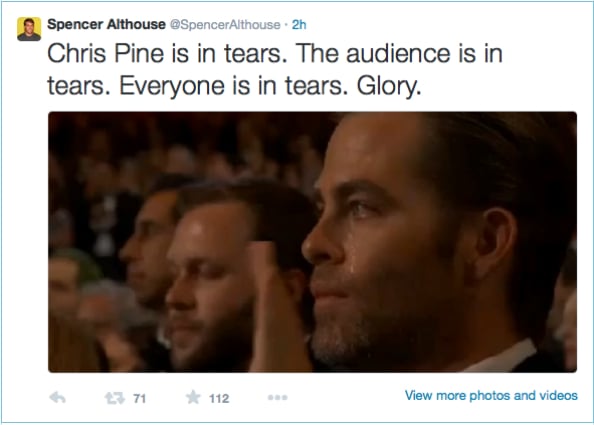 So from new social media crazes to political speeches and tears, we’d say that overall the Oscars were a huge success.

For our best-dressed picks, visit here.

AND THE WINNERS ARE….

Morten Tyldum for The Imitation Game

Felicity Jones, for The Theory of Everything

WINNER: Eddie Redmayne for The Theory of Everything

Benedict Cumberbatch for The Imitation Game

Robert Duvall for The Judge

Keira Knightley for The Imitation Game

Meryl Streep for Into the Woods

Into the Woods – Colleen Atwood

Achievement in make-up and hairstyling

The Hobbit: The Battle of the Five Armies – Brent Burge, Jason Canovas

Me and My Moulton – Torill Kove

How to Train Your Dragon 2

Song of the Sea

The Tale of the Princess Kaguya