Oscars 2014 Round-Up | The Winners, The Selfies, The Tears And The Departed 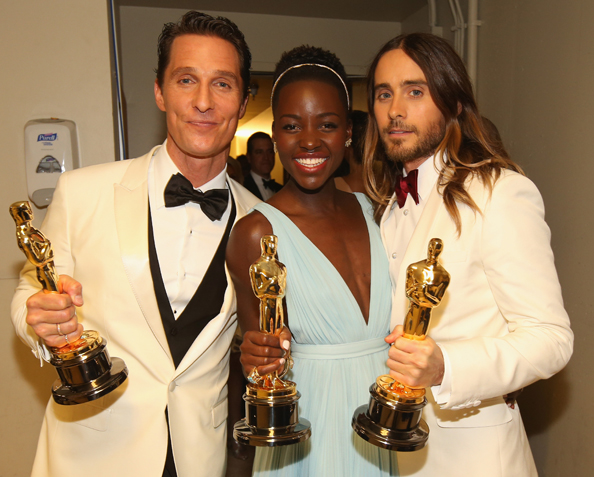 As the most beautiful people in Hollywood head off to the after-parties, we give you the lowdown on what you need to know about this year’s Oscars. Probably the least controversial and most heart-warming one in a while, it was a night of hard-earned, well-deserved awards, tear-jerking acceptance speeches, Happy dances, missing friends and group selfie love.

Ellen DeGeneres was this year’s host with many critics citing her as being a ‘safe’ option after last year’s Seth McFarlane. New York Times writer Dave Itzkoff said: “If Ellen DeGeneres was meant as a safe, all-inclusive corrective to a Seth MacFarlane, did the Academy overcompensate too far in the other direction?” Ellen, in fact, spent very little time on stage, and an awful lot of time promoting Samsung products and managed to usurp the title of Most Retweeted Tweet (from the reigning champion Barack Obama) by encouraging people to retweet this rather fun, very human group selfie.

The show started off with a touching tribute to former Oscar winner and recently departed acting talent Philip Seymour Hoffman. Hoffman won an Oscar for his performance in the 2005 biopic Capote. Bill Murray managed to sneak in a personal tribute to Harold Ramis, who also passed away recently. Murray and Ramis had collaborated on several of Murray’s early films including Meatballs, Caddyshack and co-starred in Ghostbusters – Ramis was the delightfully nerdy Egon. Sadly, it has been reported that the two actors had been feuding for over a decade before Ramis’ death.

Jared Leto was the proud recipient of the Best Actor in a Supporting Role for low budget winner Dallas Buyers Club. Many women will be thrilled that he has returned to acting after spending majority of his time focusing on his band 30 Seconds To Mars. Apart from his mesmerising silky mane, he gave a particularly heart-warming speech, which focused on his mother, who, although was a single mother and high school dropout at the time of his birth, always encouraged him to be creative and dream big. His mother and brother joined him in the front row and oozed with pride when the cameras panned onto them. In an interesting and thoughtful mention he told the dreamers in Venezuela and the Ukraine that we are thinking of them.

Lupita Nyong’o, the winner of the Best Actress in a Supporting Role, also gave a gushingly grateful speech, which focused on the film’s cast and crew including director Steve McQueen. She also made several touching mentions toward the real people whose lives are depicted in the award-winning film 12 Years A Slave. Her most memorable quote will no doubt encourage many young talents to follow their hearts – “When I look down at this golden statue, may it remind me and every little child that no matter where you’re from, your dreams are valid.”

In a performance highly reminiscent of Tinie Tempah’s BAFTA’s stunt, Pharrell descended from the stage during the performance of his hit single Happy, which was truly successful in getting the stars including Lupita Nyong’o, Meryl Streep and Amy Adams up and busting their best moves.

The most peculiar part of the show was from Kim Novak when taking to the stage to present the awards for Best Animated Film with Matthew McConaughey. Kim’s delivery was slightly incoherent and she shocked the audience with her new look, which suggests she has been under the knife a few too many times.

Perhaps the least surprising event of the night came courtesy of our film fave Jennifer Lawrence, who fell over on the red carpet – again.

Here is a full list of the night’s winners: