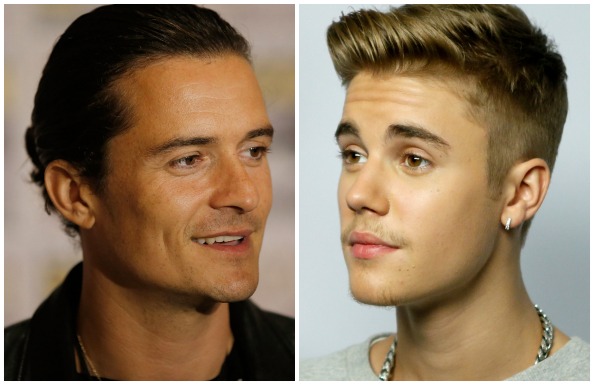 It has to be one of the most embarrassing and cringe-worthy celebrity battles in history but it happened. Wannabe bad boy Justin Bieber and Hollywood actor Orlando Bloom had an alleged bout of fisty cuffs at an Ibiza restaurant over a girl – Miranda Kerr, no less.

The two stars were at the celebrity-studded Cipriani restaurant on the Spanish island of Ibiza when the measly altercation was caught on CCTV.  The film shows Orlando Bloom, Miranda Kerr’s ex-husband, power walking up to singer Justin Bieber and attempting to hit him.

Justin Bieber’s security were quick to separate the pair after the first punch was thrown. But while Orlando Bloom is seen backing off, he soon returns and gesticulates at Justin who reportedly can be heard shouting: “What’s up, b****?”

Witnesses claim the scuffle started after the 20-year-old singer aggravated the actor after telling him: “Say hi to Miranda for me!” The 31-year-old model is reported to have gotten “very close” to Justin after meeting at a New York party, following a Victoria’s Secret show in 2012, while she was still married to Orlando.

According to The New York Post, Justin said to Orlando, who has a three-year-old son with Miranda: “ She was good…” While rumours suggest something may have happened between Justin and Miranda, the Australian beauty’s agent insisted the claims were “”false and defamatory.”

As if the weird and alleged love triangle could get any worse, Justin’s ex-girlfriend Selena Gomez was spotted back in April with the 37-year-old Pirates Of The Caribbean star outside a Chelsea Handler show in Los Angeles. Although the pair left in separate cars, and there has been no further reports of a romance, there’s no doubt the two former flames were part of the reason for the near fight.

After leaving the restaurant Justin posted a picture of a bikini-clad Miranda on Instagram with merely an emoji of a crown in the caption. He quickly deleted the image, replacing it instead with an image of what looks like Orlando crying. 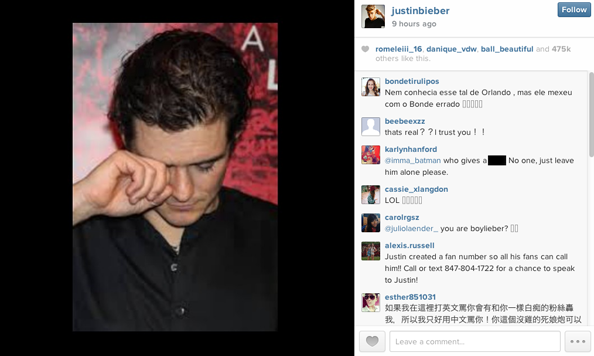 Hmm, were not sure about this. As embarrassing as the whole situation is, a word of advice to Justin: real mean don’t hide behind body guards and social media.