Now The Burkini Is Banned! Reactions Around The World 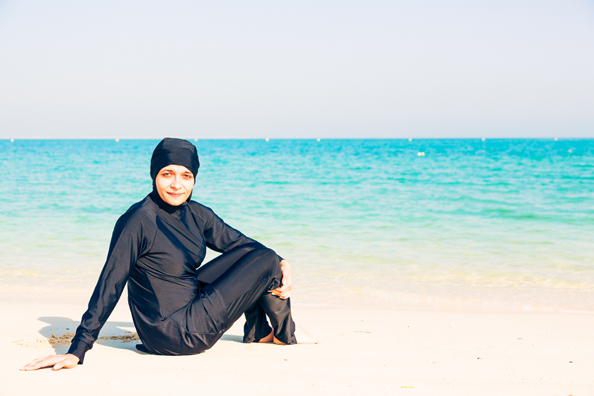 During the Rio 2016 Olympics the female Egyptian volleyball team players Doaa El-Ghobashy and Nada Meawad were praised for opting against the typical bikinis sported by the vast majority of players and instead wearing a modest uniform that upheld both their culture and their love of volleyball.

Yet, just when we thought the general public was becoming more accepting of other cultures, during the closing week of the games the burkini has now been banned on some French beaches.

The formal burqa is already banned in France. In fact it was the first European country to ban the burqa in public. While the ban started in 2004, with a clampdown on students in state-run schools, it came into full effect in April 2011. Anyone caught wearing the burqa or niqab will be fined 150 euros (Dhs749).

While the law was met with disdain by most, 10 countries across the globe followed suit and banned the hijab, find out which countries, here.

So far, 11 French municipalities have joined the ban, including popular tourist destinations Nice, Cannes, Eze and Saint-Jean-Cap-Ferrat on the French Riviera. The ban allegedly came following Prime Minister Manuel Valls’ remark that the swimwear is “not compatible” with French values. The mayor of Cannes called it “a uniform that is the symbol of Islamist extremism.”

Since the ban four women have already been cautioned with a fine of Dhs141.

Fortunately the negative feelings surrounding the burkini – a swimsuit that covers a woman from head-to-toe – have not been felt worldwide. In fact, in Australia one designer Aheda Zanetti has seen an increase in sales for her burkinis, especially among non-muslims.

Also fighting against the ban is Algerian businessman Rachid Nekkaz who has paid out more than £200,000 (Dhs962,429) in fines and legal fees levied on Muslim women who defied the ban.

“As soon as I see that France is not respecting fundamental liberties, I always get my cheque book out,” he said, in an interview with the Telegraph.

Nekkaz set up a “freedom defence fund” in 2010 to help pay the fines of women who chose to continue wearing the niqab after it was outlawed in France and Belgium.

It is not yet know if other European countries will follow France ban.