Malaysia Airline plane, MH17, was shot down by militants over the Ukraine-Russia border killing all 298 passengers and staff on board.

The plane, which left from the Netherlands and was bound for Kuala Lumpur, came down near the city of Donetsk, a stronghold of pro-Russian rebels.

It has been confirmed that the plane was shot down by a surface-to-air missile. While neither Russia or Ukraine have taken responsibility for the attack, many fingers are pointing toward Russian President Vladimir Putin, with Hillary Clinton even adding, should the evidence link Russia to the attack, “that should inspire the Europeans to do much more” to support Ukraine.

UK Prime Minister David Cameron said in the Sunday Times: “The growing weight of evidence points to a clear conclusion: that MH17 was blown out of the sky by a surface-to-air missile fired from a rebel-held area. If it is the case, then we must be clear what it means: this is a direct result of Russia destabilising a sovereign state, violating its territorial integrity, backing thuggish militias, and training and arming them.”

To make matters worse, the Ukraine government has accused pro-Russian separatists of removing bodies from the crash scene in what their claim is an attempt to destroy evidence.

Monitors are still searching for the plane’s black box, which might give more insight into the tragedy. However, pro-Russian separatists are preventing investigators access to the site, insisting they will grant safe access to the Malaysia Airlines crash site if Kiev agrees a truce.

The situation is on-going.

The couple, who have been dating for two years, tied the knot in a romantic tent set in the 10-acre organic farm in the foothills of the Sierra de la Laguna Mountains. Celebrity guests included Jonah Hill, Candice Swanepoel (as well as many more Victoria’s Secret models), Jason Segel and Erin Heatherton while the evening’s entertainment came in the form of Stevie Nicks. Content with their mega-wealth, Levine, 35, and Prinsloo, 25, asked guests to donate money to charity instead of offering wedding gifts. 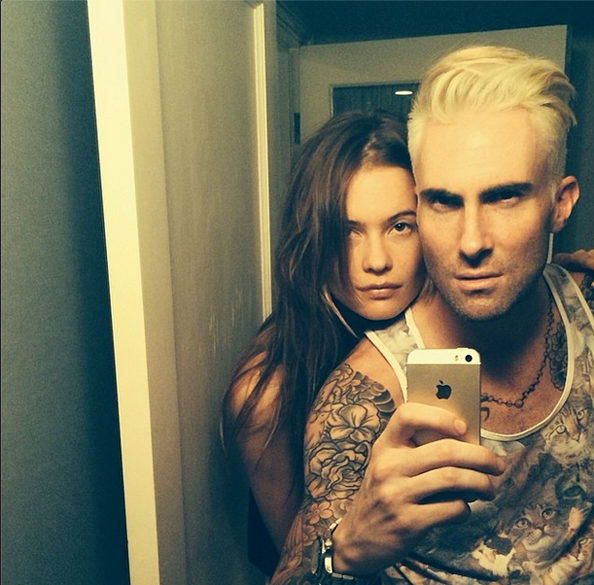 You might not remember her as a fashion icon, but former First Lady Laura Bush, wife to George W Bush, has style in abundance, something you will discover at the new Oscar De La Renta exhibition at the Bush Library in Dallas, USA.

The exhibition showcases five decades of First Lady fashion and one of the many pieces on display is Laura Bush’s Oscar De La Renta dress and coat that she wore to her husband’s swearing-in ceremony in 2005.

Laura Bush’s outfit is one of over 60 featured in a retrospective documenting Oscar De La Renta’s career from the 1960s to present day. The gowns are arranged according to themes and influences. Jenna Bush Hager, Laura’s daughter, also has her wedding dress on display along with her mother’s turquoise dress. The exhibition runs until October 5.

With business dwindling, American fashion brand Coach has been forced to lay off more than 150 employees in an attempt to consolidate resources globally.

The brand renowned for it’s leather goods saw stocks drop by 35 per cent, resulting in the imminent closure of 70 stores across North America.

In attempt to change its financial status, Coach has decided to become more fashion-forward in terms of design. The A/W14 collection, which was shot by Steven Meisel, will be a first glimpse into its new direction. The campign also marks the label’s ready-to-wear debut, designed by new Creative Director Stuart Vevers, previously of Loewe.

WIDOW OF SMOKER GETS US$23.6BN PAYOUT

A widow of a chain smoker who died from lung cancer has successful received US$23.6bn in compensation from RJ Reynolds Tobacco, makers of Camel and Winston cigarettes

During the four-week trail the widow argued that the tobacco firm was negligent in informing consumers of the dangers of tobacco. Her husband Michael Johnson died in 1996 aged 36. Despite several attempts to quit Mr Johnson was unable to give up his addiction.

The jury took 15 hours to deliberate their verdict.

“RJ Reynolds took a calculated risk by manufacturing cigarettes and selling them to consumers without properly informing them of the hazards,” said the widow’s lawyer. “As a result of their negligence, my client’s husband suffered from lung cancer and eventually lost his life. We hope that this verdict will send a message to RJ Reynolds and other big tobacco companies that will force them to stop putting the lives of innocent people in jeopardy.”

RJ Reynolds plans to appeal the court decision and verdict.

Following months of speculation, it has been revealed that Angelina Jolie is set to direct By The Sea, in which she will also co-star alongside her fiancé Brad Pitt.

The project, which is said to be a powerful love story penned by the 39-year-old actress, comes nearly 10 years after Mr & Mrs Smith – the last film project the Hollywood couple worked on, and also how they met. Pitt at the time was married to Jennifer Aniston.

The couple who are co-producing the project have been scouting locations in Malta, an area all too familiar to Pitt who filmed part of his movie World War Z there.

The Kindle Unlimited is a new read-all-you-can and listen-all-you-can scheme by Amazon that is set to be a big hit among bookworms.

In an attempt to diversify the e-book market, Amazon is convincing readers to buy the Kindle Unlimited for US$9.99 a month. The service allows customers to “read” pages across different platforms. It also gives them access to 2,000 audiobooks and 600,000 books.