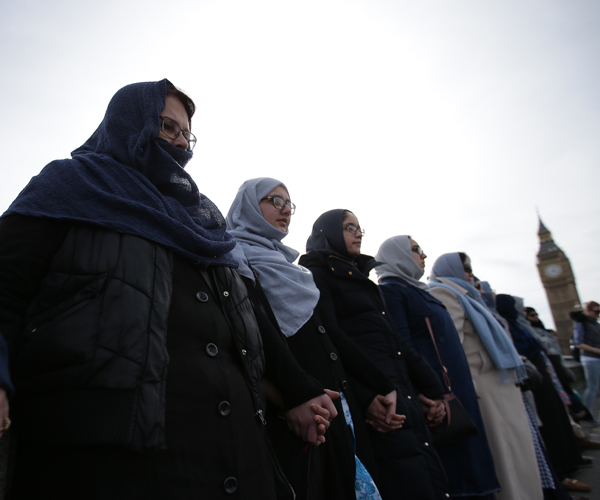 The group clasped hands and bowed their heads to honour the victims of a recent attack in the British capital.

Muslim women across the UK have come together to form a human chain in response to a horrific act of violence.

Wearing blue to symbolise hope, the women gathered at the London scene where four people – plus an attacker – lost their lives last Wednesday.

On Sunday, a number of Muslim women congregated on the bridge, and linked arms for five minutes as Big Ben rang in 4pm. 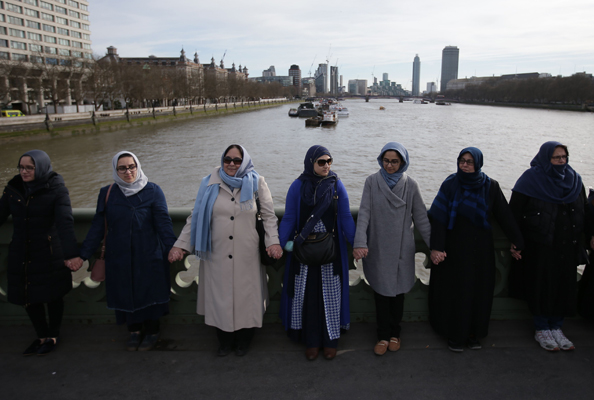 Read:
The UAE Wants To Be The World’s Best Country By 2071
This Is When Ramadan Is Expected To Start, According To An Expert

The gathering was organised by Women’s March On London, and females from various backgrounds and faiths took part.

“As a visible Muslim I think it was important to show solidarity with the principles that we all hold dear, the principles of plurality, diversity and so on,” Ayesha Malik, a British mother, told Metro.

The hashtag #WeStandTogether started trending on Twitter during the event, with many sharing powerful images of the gathering online.

The event also comes after one Muslim woman pictured during the event was forced to defend her actions.

The hijabi woman, who has requested that the image in question not be circulated by the media, was captured walking past a group surrounding an injured passerby, and later criticised online for not helping.

However, as the woman told Tell Mama, she was “shocked and totally dismayed” by the reaction.

“Not only have I been devastated by witnessing the aftermath of a shocking and numbing terror attack, I’ve also had to deal with the shock of finding my picture plastered all over social media by those who could not look beyond my attire, who draw conclusions based on hate and xenophobia,” she said.

The photographer behind the image agreed, telling the Guardian “she looks visibly distraught”.

“We were all being told to clear the bridge at various stages, so it’s not unreasonable to think she’d been told to leave the bridge at some point just like everybody else.”