Muslim Blogger Creates A Range Of Hijabs For Every Skin Tone 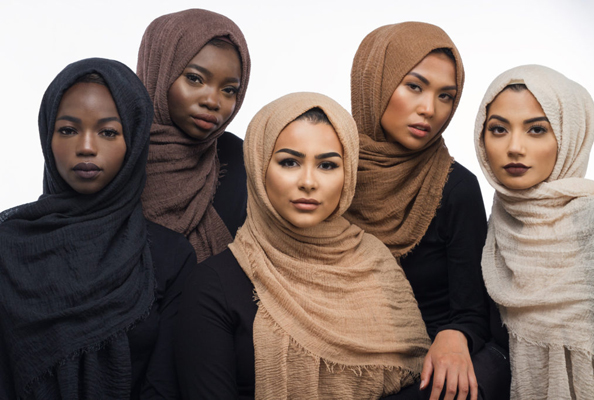 No, there’s no such thing as one shade of ‘nude’.

The fashion industry may not be the most diverse, nor the most inclusive – however one woman is on a mission to change that.

“The theme of the collection plays around the idea of marriage; not necessarily as a bond between a man and a woman, rather as a bond between people from different backgrounds and cultures,” the 22-year-old blogger from Birmingham wrote on her website.

“I wanted something for everyone: men, women; from every background.”

Da Silva, who describes herself as having Brazilian and Lebanese roots, hopes the unisex collection will “break up the trend of having brands with clothing dressed on only lighter skinned models”.

The blogger also stated the hijabs could be worn for a variety of faiths, and has named the shades using a range of tongues.

The lightest hue in the collection, Zaffeh, is the Arabic term for a wedding march, while the caramel-toned Rukhasti means “sending off” in Urdu, a word traditionally used when a bride leaves her wedding with her new husband and his family.

The chocolatey Aroosadda means bride in Somali, while the darkest shade – the ebony Aure – translates as the Hausa word for marriage.

The cotton-and-Spandex-blend hijabs are currently out of stock due to demand, but Da Silva has assured customers there will be more soon.

Sorry!! They will be restocked soon ❤️ https://t.co/3efudP8F2f

Read:
This Saudi Teen Is Campaigning To Introduce A Hijab Emoji
Beauty Blogger Sparks Debate By Donning Hijab In Eid Tutorial
Meet The Ice Princess In A Hijab Determined To Make UAE History

Though feedback around SKIN has mostly been positive, Da Silva said she has received some criticism about the range’s price.

“The price point is at £20 because of how much effort and investment I’ve put into the collection,” she told Metro.

“I’ve made sure it all has a special and  personal touch from the packaging side. All profit made is literally going back into the business to purchase more stock and packaging.”

The blogger also told BuzzFeed she hopes to extend the range in the near future.