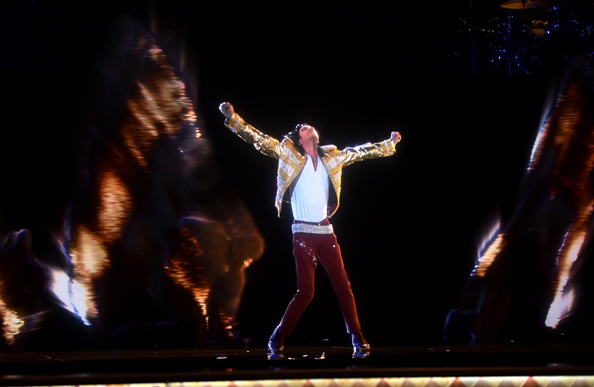 It may have been five years since the King of Pop, Michael Jackson, tragically passed away but he’s still commanding an audience thanks to an amazingly realistic hologram, which debuted at last night’s Billboard Music Awards. Performing his new hit, Slave To The Rhythm with 16 real backing dancers, the music icon’s projection even moonwalked across the stage much to the audience’s delight.

The previously unheard track will be the first release from Jackson’s posthumous album Xscape, which features a compilation of unreleased songs from the artist. Cultivated and produced by rapper Timbaland and Epic Records chairman L.A Reid, who previously worked on several hits with the late singer, the album has already shot to Number One in several countries worldwide.

Wearing red trousers and a sparkling gold jacket, the hologram proved to be so lifelike it had many audience members in tears and later on their feet for a standing ovation. However, it was a moment that almost didn’t happen thanks to a large amount of controversy surrounding the computer rendering. Leading up to the show the evening was promoted as a ‘history-making performance’ rather than the digital resurrection of Jackson as American company Hologram USA Inc. took the awards show to court in an attempt to block the performance, claiming it violated the technology patents they owned.

While this may have been the first time an audience has heard anything from the Xscape album, fans of the late star have been able to catch a digital rendering of the singer for the past year at Cirque du Soleil’s show Michael Jackson ONE, who are also being sued by Hologram USA Inc. for the same reasons as the Billboard Music Awards. Having taken over six months of planning, filming and choreography to make, even with the last minute controversy, the spectacular performance most definitely did not disappoint.

And the Billboard Music Awards winners were…