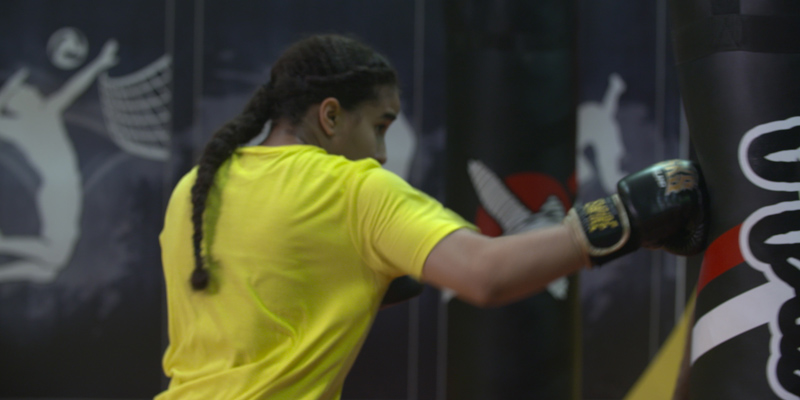 She trains three hours a day on top of her school work.

What were you up to at age 14? We were mostly watching The OC and texting on our Nokia 2210s, but this young Emirati is using her time a little more productively.

Noura Al Bloushi first got into Muay Thai when she was 9, at her father’s suggestion. While Brazilian Jiu Jitsu is more popular in the UAE, Muay Thai is on the rise. The UAE Muay Thai Federation formed last April, the Abu Dhabi Sports Council says, and Al Bloushi is one of its rising stars.

READ:
Meet the Jordanian woman who might be the WWE’s first Arab star
15 things only people who grew up in Dubai will know

The young athlete says that not all the men she’s encountered have been as supportive as her dad. She’s faced criticism from those who say Muay Thai isn’t a sport for girls, and even that girls shouldn’t do sports at all.

Noura’s coach, Sbee Rahal, said her arrival at the gym turned more than a few heads.

“She grabbed all the attention as an Emirati girl fighting in a sport considered to be for men only in our society,” he told the Abu Dhabi Sports Council (you can check out more of what they’re up to here).

That doesn’t put Noura off, though. On top of her school work, she’s at the gym for three hours a day working towards her goals.

The sport, which is also known as the art of eight limbs, is picking up here in the UAE. The local federation hopes to stage national tournaments in the near future, and you can bet Noura will be on hand.

“I want to achieve every gold medal in every championship and be a professional in Muay Thai,” she told the Abu Dhabi Sports Council, adding that she wants to compete internationally and represent the UAE.

We’d say she’s well on her way – Noura has already been selected for the national team. Just think what she’ll have achieved by the time she finishes high school.

You’ve got our full support, gal. Keep it up.