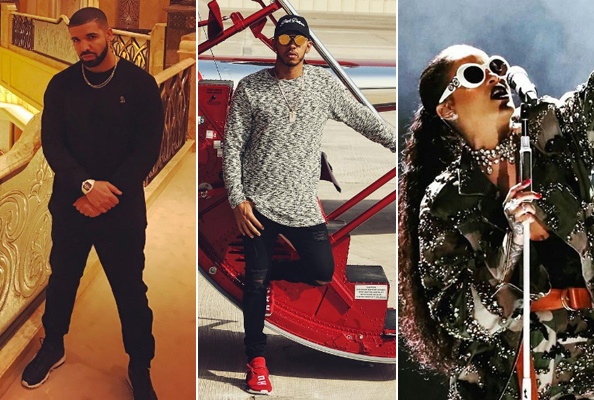 The smell of burning rubber, the deafening screech of tyres… yes, it could only have been F1 weekend in Abu Dhabi.

The racing extravaganza always attracts quite the crowd, and this year was no exception.

As well as thousands of racegoers, tens of A-listers jetted into the capital for performances, parties and general merriment.

Meanwhile athletes, socialites and even British royalty got in on the racing-track action.

So with no further ado, here’s how these celebrities spent their time in the UAE…

Read:
Adrenaline Junkies, This New Adventure In RAK Is One For You…
Queen Rania’s Australian Tour Wardrobe Is Seriously Sensational
14 Backstage Secrets From Les Misérables At Dubai Opera
Is This Abu Dhabi Gig The Ultimate New Year’s Eve Party?

The songstress slayed while closing the F1 weekend.

Just get a taste of those pipes:

The driver du jour arrived in town via a private jet (natch).

The racing champ even brought his mum to the UAE to watch him compete.

So happy my Mum is here ❤️ #MakeHerProud #Love

great to feel so much support 🇦🇪🙌🏻

… and got some professional snaps taken too.

1. How great is it that the All Night Long crooner is on Instagram? And 2. Not even jet lag can dampen his spirits.

After a 17hr flight, you find humor in everything! Abu Dhabi, I’m here!!! #AbuDhabiGP #Yasalam2016

We’d have a little skip too with cheers like that.

Getting into the National Day swing of things.

It was all stop and go for the rapper.

The Brit did some (big ticket) shopping…

Thanks for showing us around Mo ! @dealsonwheels_uae 🎯

… and had a parental plus-one for the main event.

Yep, the seventh in line to the British throne stopped by the tracks.

The reality TV star killed it DJing at a post-F1 party (or so our What’s On friends tell us).

#GoodTimes with #Luciano at our #F1 Party last night at #VIProomAbuDhabi 🎶😝✌🏻️😎🎶

#Twinning at The #Mosque with @DanielaLopezOsorio. 👑👸🏻👸🏼👑