What began out of a love for fashion and creativity for Manaal Al Hammadi, turned into a subculture and voice for the modern-day modest woman. The Emirati designer discusses with us what it means to be a pioneer in her field and how she’s leading the way for so many others

Can you talk us through your career from the beginning to where you are now?

manaalalhammadi the brand started back in 2006 and it was built on the grounds of passion, support and belief, as cliche as this may sound, I owe it all to my parents. I was a mere 14 years old when I started designing dresses followed by abayas for myself as nothing off the rack would give me the satisfaction I got from wearing something I designed and planned by myself. I come from a background of creatives, my parents both have an eye for art, design and finesse, and I got the best of both worlds, I believe. Having Dubai as my canvas, I was able to make a mark in the progressing years of the brand and this impressive city hand in hand. Having said this, the hustle was real. The hardships, disappointments and struggles are always underrated, they are really what refine a person and brand. They teach you lessons in practicality and gives you time to ponder upon and further your vision and work as hard as you have to get where you imagine yourself.

How did you end up becoming an entrepreneur?

Initially, I had no idea what direction I was going in given my age, I loved what I did because I did it for myself. Soon the word came out and relatives started asking me to dress them for formal occasions and I did it as a favour at the time. As my work became increasingly popular my vision started building and it pushed me towards putting the kind of work out there that made a difference and screamed of a new era, and there began my entrepreneurial journey. 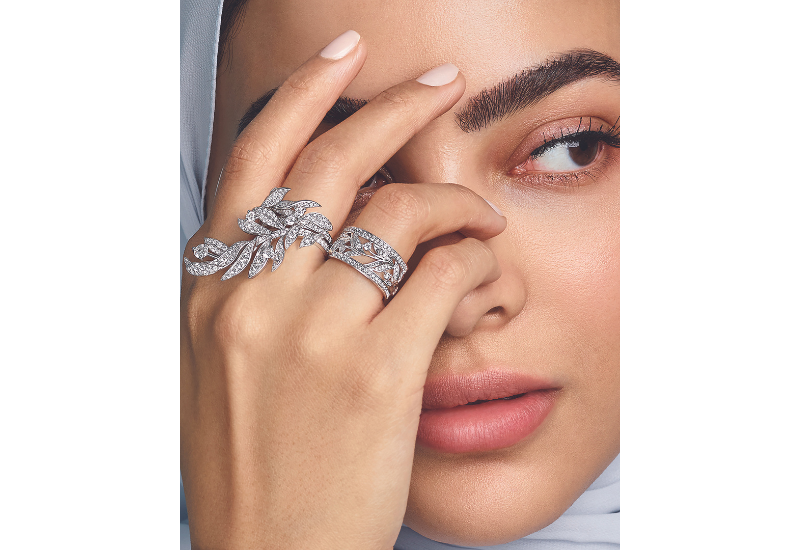 You’re a leader in the fashion world in this region – what’s it like paving the way for so many women in the GCC & Arab world?

It hits me time and time again that, without a doubt, manaalalhammadi, the brand, is one of the firsts of its kind, it’s not only a brand, its a subculture, a voice for the modern-day modest woman, for women to express their inner leader without fear. I have always believed in unconditional support in any way possible, and having the pleasure and honour to dress women of the future gives me the ultimate high.

You opened your eponymous store nearly two years ago – how long in the making was this process?

The manaalalhammadi store has been a dream throughout the 14 years before it opened its doors, a dream on top of every list, a priority above all. However, I did take my time to grasp the depths of the brand and its potential before a step this big was taken in favour of the brand. manaalalhammadi opened its doors on 19.09.19 and welcomed family, friends, supporters and believers who always had faith during all the years leading up to the opening. The store is in the neighbourhood I grew up in and the interior was designed by me and my father. Its simplicity, flow and bold details make it an airy experience and is very true to the manaalalhammadi aesthetic. It has indeed been marked as a milestone, and plans for future locations within the UAE and the GCC are in the pipeline and this makes me ecstatic.

You’re a big champion of different local brands in the region. How do you go about this?
Talent in the UAE and the region gives me a sense of pride and hope. Being a pioneer in my field comes with responsibilities, setting a standard and benchmark falls on the brand’s shoulders and in doing so I have no doubt.

What difficulties have you faced as a female leader in the world of fashion in this region?

Until today, I haven’t come across a hardship based upon the fact that I am a female, being a 90’s kid I believe comes with its perks, since my younger years I’ve been seeing the ease of access being developed for women in all fields. I got to grow up in an environment that increasingly believed the significance of a woman’s role in all walks of life, due to which it never occurred to me that to achieve anything, being a female would be a hurdle. This created my mindset, and believe me, a woman on a mission is invincible, and she herself moulds her path.

What is a philosophy that you live by in your professional life?

Keep your plans, ambitions and opinions on the down-low – work towards them silently yet in full force and success will follow.

What are some of the key lessons you would like people to take from your career?

I am still polishing manaalalhammadi the brand – its full potential is yet to be discovered and released. Lessons along the years have been of patience, understanding oneself from within. Success is written for all of us in different ways and courses of life, never force it, what’s yours will never go unachieved, keep an agenda revise it religiously and allow it to fall in place.

What are your hopes for women in the future of this country?

The UAE never fails to impress, no matter what the challenge, it’s taken head-on, a woman not only runs home but runs in the veins of its country, Emirati women are brilliant, being acknowledged amongst them is an absolute honour, women have been accelerating their passions and visions and there is no doubt the results will be spectacular.

This is ‘The Icon Issue’ – who are the icons in your life?

Without a doubt, my mother is my constant icon, inspiration and source of energy, I am everything I am today because of her strength which leads me without a pause. Having said this, I do also look up to Sheikha Lubna Al Qasimi for her fearless movement towards female leadership and empowerment. Margaret Thatcher for making her voice prominent and heard regardless of the sea of leading men in her midst, reading about her resilience is what stood out to me, and last but on least, Fatima Jinnah for her constant fight for the rights of women. She once said, “Remember, it is a woman who can mould the character of the youth of the nation.” I resonate with these women on a level beyond my own understanding. I wish to be even a fraction as wise as these women combined.