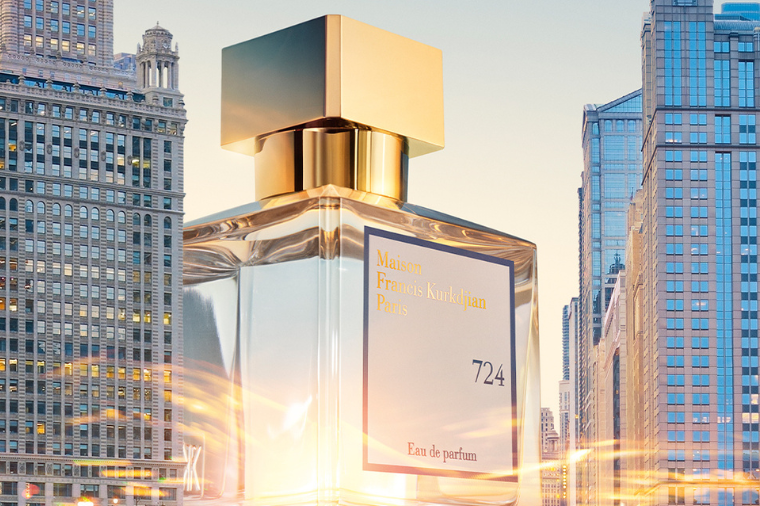 Having garnered over 55.5 million views on TikTok for the hashtag #BaccaratRouge540, the master perfumer behind Maison Francis Kurkdjian has taken the leap of faith to create another addicting olfactory addition.

By thinking outside the box, Maison Francis Kurkdjian’s co-founder, Francis Kurkdjian, launched a new unisex fragrance 724, that vividly embodies New York’s electrifying spirit. By working from each element from start to finish, he explored new opportunities during the creation process without limiting himself to one element.

So where did the inspiration come from? “There is something about big cities that elevates you and electrifies you in a way. This new way de perfume, 724 is all about that,” he tells Emirates Woman.

After years of travelling, his visit to New York inspired him the most and one would never guess that it’s the “thick white vapour released in the brisk morning air” from laundries that played a crucial role in creating this fragrance. By capturing the city’s essence, this release is another stepping stone for the brand to explore new opportunities.

With years of expertise in this industry, Kurkdjian was the first perfumer to “open a bespoke fragrance atelier in 2001”, he learned the ins and outs and eventually launched this eponymous brand that has created some of the most iconic fragrances of all time.

To understand what drives his entrepreneurial spirit, we spoke to the brand’s co-founder about his inspiration and vision behind this latest launch.

What is at the heart of the new fragrance 724 from Maison Francis Kurkdjian?

I grew up in the suburbs just outside of Paris and moved to the city later. I lived in New York for about five years, at the beginning of my career as a perfumer, just after releasing “Le Male” for Jean-Paul Gaultier. Later, I had the opportunity to travel all around the world and see many wonderful places. Sydney, Tokyo, Seoul, Shanghai, New Delhi, Mumbai, Manila, Kuala Lumpur, Moscow, London, Berlin, Buenos Aires, and Los Angeles. All these metropolises, despite being so different from one another, share magnetic, uplifting energy, something that makes you feel that everything is possible. There is something about big cities that elevates you, and electrifies you in a way. This new eau de parfum, 724, is all that. It is about the effervescence that big cities across the globe have in common. New York was part of my inspiration be- cause I have very precise memories from my years there, but 724 is not about New York only. When I visited for the first time, what struck me instantly was the rhythm of the city, its uplifting and thrilling energy. It’s a city “that makes sleep useless”, to quote Simone de Beauvoir. I walked the streets in the early morning, passing by the laundries and seeing the thick white vapour they released in the brisk morning air. It always put me in a good mood, it felt comfortable, and serene. I wanted to translate this very enveloping, reassuring sensation in the silage of my fragrance. 724 has strength and balances freshness with modern sensuality. 724 has a kind of optimism that keeps you open-minded.

Which notes have you included and why are they special when layered together?

724 is like protection in the city, the sensation you want to feel when you walk around the city that keeps you away from stress and daily troubles. I wanted the feeling of cleanness, something fresh, pure, energizing, but cocooning and comforting altogether. It is an urban scent, but not in the way you’d expect. 724 is a musky floral eau de parfum, composed of three main accords. It starts with a fresh urban accord as top notes, carried by aldehydes and bergamot oil from Italy. It’s a luminous and even slightly metallic accord. Then in the core notes, you’ll find a floral white accord, driven by white flowers and jasmine absolute from Egypt. Finally, the base notes release a sweeter, cosier feeling. I called it “Comfortable Cotton“ accord, it gives that reassuring aspect to the composition. The whole scent is like a bubble in the city, an imaginary blanket you want to keep with you while you face the day in the city.

Is 724 a unisex fragrance and how do you see fragrances in the future – will they all become unisex?

724 is a scent with a musky floral sillage that anyone could wear, in any season. It has this effortlessly chic, sophisticated facet, it’s elegant, and it empowers you as soon you spray it. Most of Maison Francis Kurkdjian’s fragrances don’t cater to a specific gender, actually. When I started Maison Francis Kurkdjian with Marc Chaya, its current CEO, we crafted a fragrance wardrobe where anyone could be free to wear anything they like, depending on personality, moods, occasions, etc. And today people are less influenced by a label than ever, they want to be free to wear whatever fragrance they like. I personally cannot predict the future, but there is definitely a trend to shift away from labels and other diktats, in society in general and in the way people experience perfume, of course.

Why did you decide to launch this particular fragrance now and how did you know it was the right moment?

724 is really fresh and reassuring, even sincere I would say. I think its modernity is all about that, sincerity. It’s not the smell of a city. It gives you the sensation of being caressed with a form of infinity, which elevates your spirit and feelings. I think we all need it, and it feels especially good at this particular moment.

Do you feel that you have an entrepreneurial mindset that is always wanting to drive innovation?

I was the first perfumer to open a bespoke fragrance atelier, in 2001, before Maison Francis Kurkdjian was opened. With the Maison, I was the first perfumer to launch an eponymous brand, through which I can really express myself and my creative vision. I wanted to work on the whole process, not just the fragrance: the name, the inspiration, the packaging, the customer experience. So, I was always driven to do things differently, to explore new opportunities and new ways of creating. Fragrance is my means of expression and it offers endless possibilities. I always look ahead. For example, we just announced a partnership with the palace of Versailles and Maison Francis Kurkdjian will be the patron of the Perfumer’s Garden, within the Trianon estate. The garden will open in 2024, it will be open to the general public with workshops and guided tours. It will feature hundreds of plants used in perfumery and will allow us to share all our knowledge and passion about fragrance with the world.

What has been the most challenging moment to date and as an entrepreneur who has launched their own brand – were there ever any moments you wanted to give up and what kept you from doing so?

I felt that I needed more space to express myself. Launching Maison Francis Kurkdjian with Marc Chaya, in 2009, felt right at the time. I don’t regret it.

As we approach FW22 – how do the fragrances you wear differ throughout the seasons?

I actually don’t wear fragrances! I only wear the one I’m currently working on.

This is The Entrepreneur Issue – what does being an entrepreneur mean to you?

Working hard for your goals and doing things differently than what people may expect of you, while not giving up in front of the difficulties you’ll encounter.