Why Do We Fall In Love | Love Chemistry 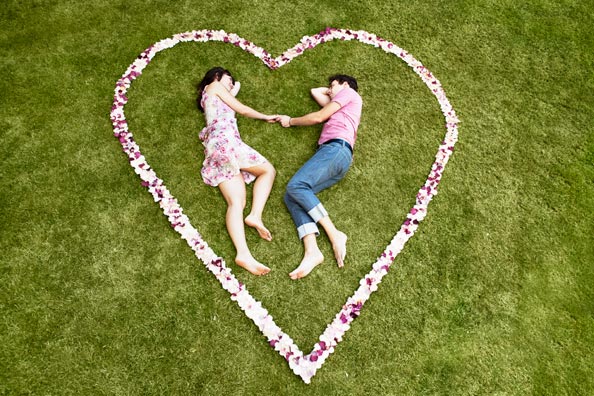 Why do we fall for the people we do? Is it good looks, pheromones or chemicals? This Valentine’s Day, Emirates Woman investigates the chemistry of love.

Being a scientist is about peering behind life’s curtain, whacking the cogs with a wrench just to see what happens. In this world, love isn’t some fairy tale bolt from the blue or a Shakespearean sonnet writ large on a summer’s day. It’s a series of social, chemical and psychology forces swirling around the body that nudge us one way or the other. Love is an equation.

“Psychologists know that we tend to fall in love with people from the same socio-economic background, with the same general intelligence, same general level of good looks, same general level of education, literacy and values,” says biological anthropologist Dr Helen Fisher, a researcher at Rutgers University and author of five novels on love and attraction. “Your childhood plays a role, but nobody knows how. Timing plays a role, yet you can walk into a room filled with single people just like you, and not fall in love with any of them.”

Tasked with finding out just why we fall in love with the people we do, Dr Fisher composed a questionnaire (which has been taken by over 10 million people around the world since 2000) comprised of 56 questions aimed at throwing a psychological light on our personality types. Just to keep everybody honest, she also placed 50 volunteers in a brain scanner to see how their grey matter was reacting to various relationship states – from long-term marriage and fresh love to being recently dumped.

“Your childhood plays a role, but nobody knows how. Timing plays a role, yet you can walk into a room filled with single people just like you, and not fall in love with any of them”

These experiments led her to identify four distinct personality types dictated by the various chemicals swilling around the brain, which she labelled “explorers”, “builders”, “negotiators” and “directors”, with each expressing a consistent preface for another type. For example, Dr Fisher postulated that the dithering, creative, emotional “explorers” tend to fall in love with the more analytical, tough-minded, emotionally restrained “directors” – a tendency that also works in reverse, explaining the old adage about opposites attracting. However, the adventurous “explorers” tend to fall for other “explorers”, while the more cautious “builders” seek out partners who are just as methodical, calm and controlling as they are.

She also proved something that people in love have long known. It makes us insane.

“We started putting people in brain scanners who’d just fallen madly in love, and what we found was activity in a tiny little part of the brain that makes dopamine – a natural stimulant,” says Dr Fisher. “In fact, it’s exactly the same part of the brain that comes alive when you take a certain drug. It’s the brain system that handles rewards. It’s associated with craving, emotion, elevation and motivation. From that, we determined that love, especially romantic love, is a particularly powerful addiction. That got me thinking, and I began to study the part of the brain that handles rejection. I figured, “Who cares what happens in the brain when you’re madly in love? It’s much more important to see what happens when you’re rejected.” This is when you suddenly become a menace to society, with stalking, with homicide and suicide.”

Dr Fisher discovered that people in love stop seeing the world as others see it. While they can list their beloved’s flaws, they’re typically buried by their adoration – much in the same way we dump toxic waste beneath concrete. Everybody has that friend, the one person who can’t see their partner is a jerk. By Dr Fisher’s reckoning, it isn’t actually their fault; their brain is repainting the objection of their affection in rosier colours.

“Their world has a new centre, you can’t help but focus on him or her,” says Dr Fisher. “Your beloved’s car is different from every other car in the parking lot, for example. Intense energy, elation, mood swings, emotional dependence, separation anxiety, possessiveness, a pounding heart and craving are all central to this madness. But most important is obsessive thinking. Someone is camping in your head.”

But where does love at first sight fit into all of this? If Dr Fisher’s correct, that lightning bolt isn’t love but lust, a rush of intense physical attraction that may blossom into something more if your values match and your personalities are compatible. Even so, she’s keen to point out that very few people are just one type of personality. In most cases, we’re a combination of types, though one is usually more dominant – a variation that can have as much to do with race as upbringing.

In Japan and China, for example, Dr Fisher discovered a prevalence of the gene that controls the hormone serotonin, a staple of the “builder type”. These types of people are rule-based, cautious, traditional, managerial, stubborn and controlling. This could mean that creative types such as “negotiators” and “explorers” could find it difficult to find partners. Food for thought for those Asian dating sites.

“We started putting people in brain scanners who’d just fallen madly in love, and what we found was activity in a tiny little part of the brain that makes dopamine – a natural stimulant”

If there’s a problem with Dr Fisher’s elegant explanation of love, it’s that our subjective experiences are so messy. Whereas Dr Fisher’s four personality types suggest an obvious route to lasting happiness, in real life we must also struggle with attraction, a bewildering phenomenon that tends to make a mockery of rational thought on a regular basis.

Attraction is a neat word disguising a bulbous assortment of social and physical factors, including good looks, age, status and similarity. It’s an almost instant judgement, a conspiratorial whisper between your brain and body in which you have little say. All of this seems particularly unfair when you consider that while attraction doesn’t necessarily imply love, there’s very little chance of anything meaningful happening without it.

On the bright side, our shallowness may not be our fault. “Physical attractiveness is an indicator of the quality of our genes, which ties directly into survival,” says Dr Mark Sergeant, a psychology lecturer at Nottingham Trent University. “Humans are born with bilaterally symmetrical faces, which become less symmetrical as we grow older due to all sorts of genetic mutations. There’s still a part of us that understands that people with symmetrical faces have better genes, which is why we find them attractive.”

This is further complicated by social conditioning, which has taught us that blondes have more fun, thin is better, overlarge muscles are a sign of masculinity, and personal grooming implies greater social status. While our views of blondes, weight and muscles are media constructs – as the fondness for fuller bodies in Africa demonstrates – the issue of personal grooming actually has an historical precedent. In the royal courts of medieval Europe, men and women rarely bathed, instead masking their odour with perfume, while hiding their blemishes behind expensive make-up. Short men wore high heels and colourful fabrics, the more lurid the better as the deeper the colour the more it cost. In contrast, peasants wore rags, and had neither the means nor the time to worry about their appearance. As a result, we are conditioned to associate personal grooming with wealth, even though the link has long been severed.

This should be of particular note to men, as scientists believe women are genetically compelled to look for dominant males who can protect and provide for their offspring. “Women find men who are successful and dominant attractive, and this is especially true in tribal societies,” says Dr Sergeant. “Money gives women the impression that men will be able to provide for them and for any children they may have together. Women are also looking for things like good personality, leadership, resourcefulness and intellect,” he adds.

One thing that’s not playing a part according to modern science is pheromones. While pheromones play a huge part in attracting a mate in the animal world, with older elephants in particular renowned for flooding the air with a cocktail of chemicals that females can’t ignore, it seems the human capacity for such olfactory wooing is limited. Studies have suggested we’re attracted to the scent of our partners to varying degrees, but as yet no pheromone governing human attraction has been found, with scientists increasingly doubtful it will. When it comes to smell, the rule is simple: don’t.

Ultimately, love is best understood as a battle between body and mind. Evolution has taught us to make snap decisions based on whatever physical information we can gather at first glance, with society happily muddling the pot with its fashions and prejudices. Yet love requires chemical balance, compatible personalities and similar goals. It is little wonder we’re always so muddled, though we’ll soon be able to cure heartbreak with a tablet, or quell the euphoria of love with a teaspoon of medicine if recent breakthroughs are anything to go by.

If that seems cold, let us leave you with this. In 2010 Dr Fisher conducted an experiment with couples who’d been together for over 20 years to see if love really did endure. Sticking the couples in the brain scanner, she discovered their readings were exactly the same as those of new couples except the activity in the part of the brain controlling anxiety was replaced with activity in the part controlling calm. Turns out the fairy tales were right after all, we can live happily ever after.