“I would like it to give another image of Tunisia,” says French-Tunisian street artist El Seed who has spent his career physically changing the image of his homeland by coating many of its edifices with calligraffiti – graffiti incorporating Arabic calligraphy.  In his new book Lost Walls, which launches today on amazon.com, Seed embarks on a graffiti road trip through Tunisia, leaving his messages-cum-art on the lost or forgotten walls of his country. Emirates Woman speaks to the artist about his latest project Lost Walls by El Seed.

What’s the aim of the book?

There has been political change [since the revolution in Tunisia] but the culture is still here, the history is still here and the focus should be on that. I want to raise awareness and make sure the people inside and outside of Tunisia realise their country is really deep in every sense. I want to bring people back to the country to discover the heritage that is left and lost there like Lost Walls.

What was your inspiration?

The idea came just after I did the Minaret project in Gabes, Tunisia (he created a 57m-high mural covering the concrete tower face of Jara Mosque). It’s cool how a painting can bring so much attention to a place like Gabes, nobody knew about this place before. At first the idea of travelling across Tunisia was a joke. I told my friend I was going to run across Tunisia like Forest Gump and I’d have the paint already there and just run from city to city, but then I felt like I needed to reconnect with the essence of my work without anyone asking me to do it, it was a personal project. I write messages that are relevant to the people of the place where I’m painting, but I do not have one particular message as an artist.

What hurdles did you encounter in your journey?

I met some people that didn’t want me to do a piece on their property or in a specific area but after they saw my work they were more than happy to keep it, and then suggested I do their families and friends homes. 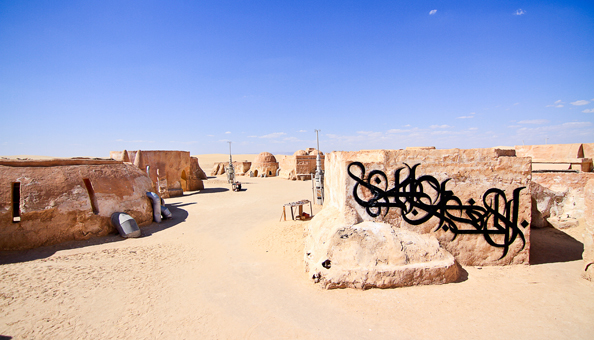 What did you learn in your month-long journey making the book?

I discovered a big part of history and culture that I didn’t know. I discovered more about the different communities in Tunisia like the Berber people and areas I didn’t know about such as Jerissa that used to be called the ‘Petit Paris’. It’s where the iron came from to build the Eiffel Tower.

Sum up your career in one paragraph?

My work has been primarily with subjects that seem contradictory, but my art reflects the reality of mankind and the world we live in today. My pieces have developed out of two worlds colliding and adorn the walls of various cities around the world including Paris, New York, Melbourne, in addition to various Tunisian cities. 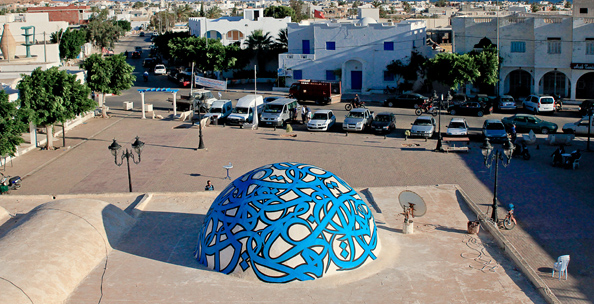 What do you believe to be the power of calligraphy and graffiti?

They are the perfect representation of beauty. It’s amazing to see the two cultures clashing and blending into one another to form a new identity, a unique mark and a distinctive style. Growing up in France influenced the graffiti side of my work, while my Tunisian heritage brought the two worlds together. Calligraffiti was a way for me to get back to my roots.

Lost Walls by El Seed is available at amazon.com