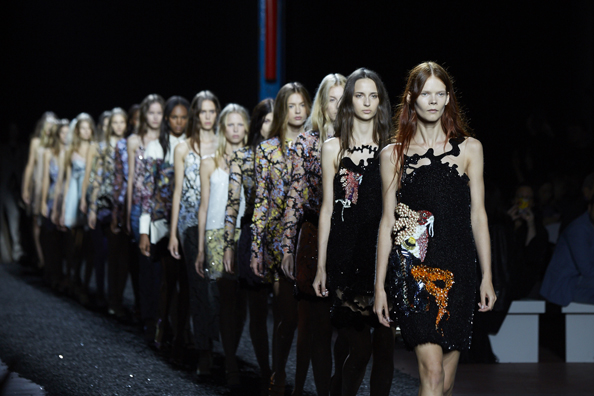 Political tension and an Indian summer provided hot backdrops for London Fashion Week. With a reputation for creative innovation and cultivating new talent, London’s spring summer 2015 collections lived up to expectations, raising the temperature even higher.  Here’s our pick of the new collections, trends and gossip…

From dresses made of mobile telephones to Sunday morning jungle raves, London Fashion Week was swinging… 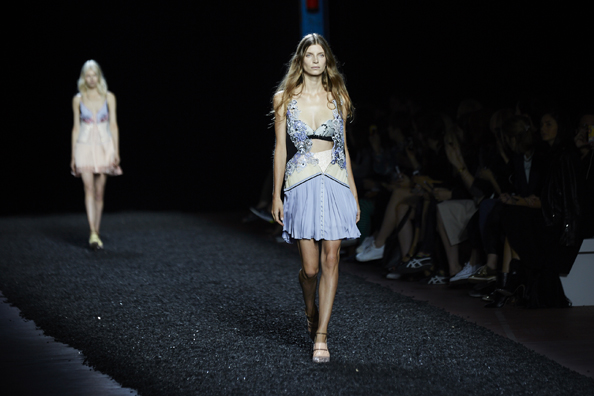 Another explosive matriarch, the Queen of Tartan, Vivienne Westwood, lived up to her anarchic reputation with her politically provocative invites to her Red Label show and adorned her models in “Yes!” badges for an independent Scotland.  The collection included artistic draping and jackets with oversized shoulder pads. 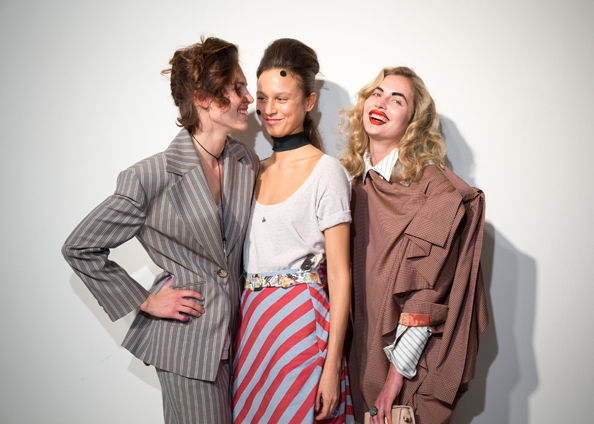 Proving that you’re never too old to party, Sophia Webster staged a jungle rave theme for her collection of neon and animal print shoes, as well as bondage boots and builders’ belts, not your average Sunday look.

Returning to an English countryside theme, Burberry Prorsum The Birds and the Bees show was pivotal for Christopher Bailey, his first as CEO and creative head. He had strong support from his #MyBurberry campaign muses Kate Moss and Cara Delevingne, and the FROW elite.  Layered tulle dresses and denim peplum jackets were showcased with a grand finale of colourful trenches paired with equally colourful birkenstocks, trainers and Bee Bags.  We predict the monogrammed Bee Bag with Horseferry check will cause a summer storm.

Battle of the bags and neons may have been won by Anya Hindmarch who set social media ablaze on the final day with her fairground style runway of spinning cups. Neon handbags, totes with customisable schoolgirlish stickers, and bags with quirky slogans including Bags Have Feeling Too, continues Hindmarch’s Kellogg’s theme.

By day it was all about breaking up the boardroom boredom with colourful classics from Roksdanda and Burberry. However, the more playful headed to Topshop Unique for sports chic or playsuits from Emily Wickstead.  Those in a classic mood selected a look from Paul Smith. 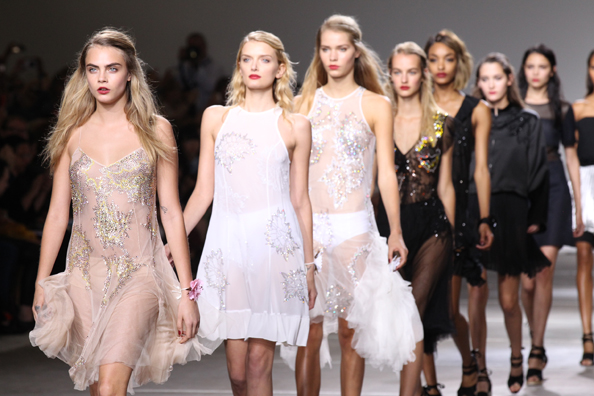 Sophia Webster and Anya Hindmarch were all about the quirky accessories. However, if you prefer homegrown classics grab a Mulberry, although be warned, the latest It bag is no bag, as seen in the empty arms of the FROWers. 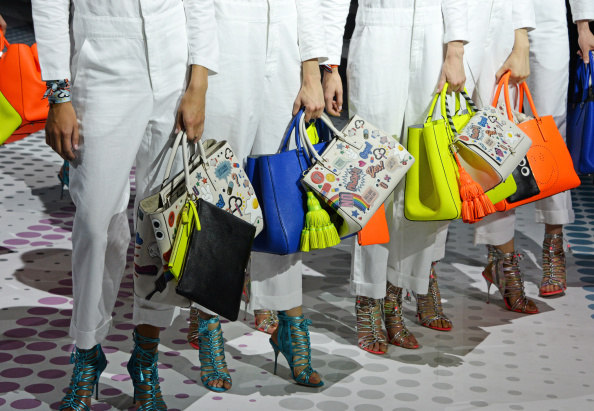 If you are attending a cocktail or evening party, the trend is about baring all, with sheer paneling or chiffon, a key feature on dresses and trousers from Issa, Tom Ford, Burberry, Christopher Kane and Mary Katrantzou.

Flora, fauna and oceanic-inspired prints are on trend, as are beading, rope and twirl embellishments.  Spring summer has no barriers and it’s going to remain hot.

MODELS OF THE WEEK

Suki Waterhouse and Cara Delevingne rocked the runways, while Delevingne took a step further with a Made In England tattoo on the sole of her foot.

Kendall Jenner, after her sensational tour at New York Fashion Week, sat on the FROW at Topshop Unique alongside Anna Wintour, Sir Phillip Green, Kate and the gang.

Harry Styles provided FROWmance at Burberry, where the It crowd thronged again – Naomie Watts, Tinie Tempah, Paloma Faith, Bradley Cooper, Anna Wintour, and, of course, the faces of #MyBurberry (Kate and Cara) were all in attendance. 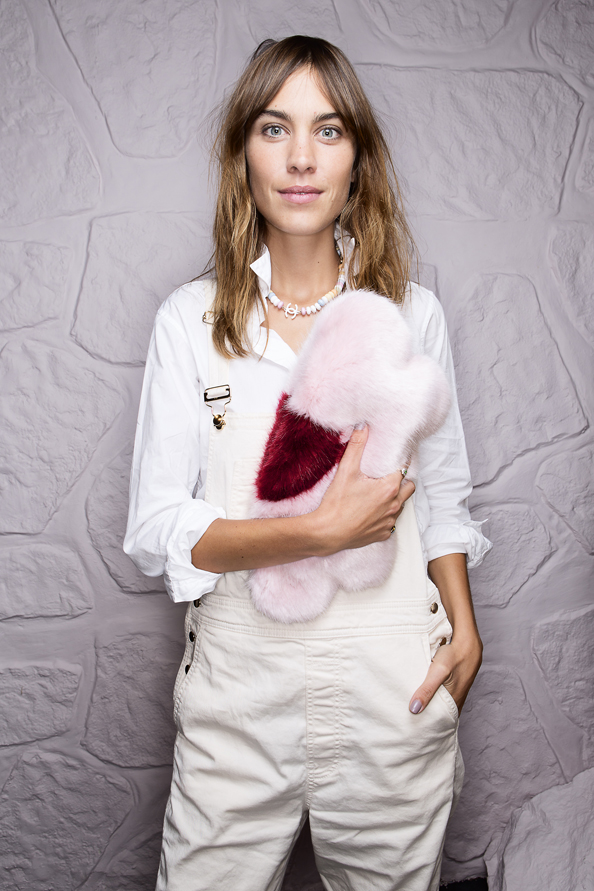 Of course, causing a sartorial stir at all the shows was our favourite British stylista Alexa Chung, whose wardrobe choices garnered just as much attendance as the spring summer 20105 shows themselves.

The after party fashion taste was questionable. Kate Moss attended the W party with a hole in the seam of dress, (it was allegedly vintage) and one night Rita Ora wore an expletive on her T-shirt.

Celebrities also enjoyed baring all, including British model and wife to footballer Peter Crouch, Abbey Clancey, who had her underwear flashed, while Rita Ora nearly revealed all in her suit at the Stella showcase.

A workman fell through the roof of the Topshop Show Space on the final day, and received medical attention, although the show still went on. 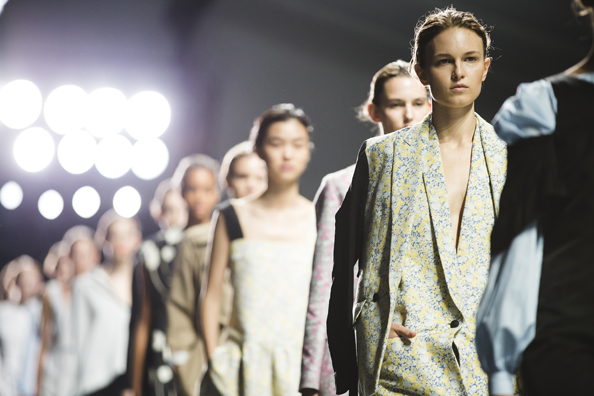