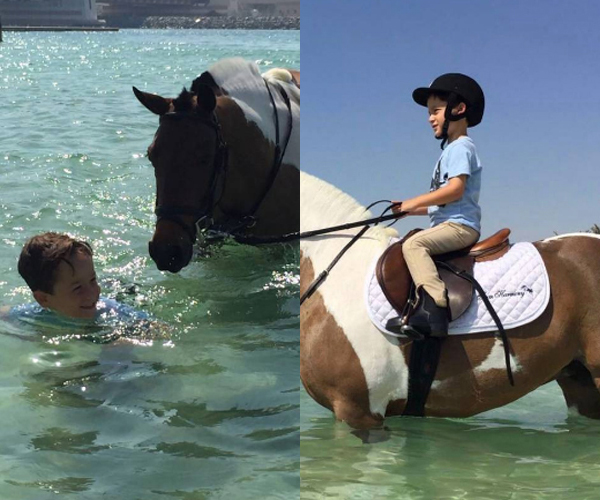 “Even the horses go swimming in the sea in Dubai,” says Princess Haya.

With temperatures in the UAE nudging 40 degrees Celsius (and only set to rise, groan), keeping cool is now at the forefront of our mind most days.

However little Sheikh Zayed has a rather novel approach to beating the Dubai heat, according to a recent image.

The five-year-old royal took a quick dip in the ocean during a recent horse-riding lesson, and his trusty steed joined him for a paddle.

“Even the horses go swimming in the sea in Dubai,” Zayed’s mother, HRH Princess Haya bint Al Hussein, captioned the shot on Instagram.

The schoolboy was shown giggling as he splashed around in the shallows, horse in tow.

Zayed was pictured riding his new Argentinian Polo Pony just last month, and the two have clearly moved past cantering around the stables.

The young royal already has a reputation as a keen equestrian, following in the footsteps of his horse-loving mother and his father, HH Sheikh Mohammed bin Rashid Al Maktoum, Vice President of the UAE and Ruler of Dubai.

Sheikh Mohammed in particular has passed his natural ability to bond with animals on to his family, regularly sharing images of his children pursuing sporting activities.

It was just earlier this year that two of HH Sheikh Mohammed’s daughters showcased the incredible sport of “horse surfing”, proving that royals and aquatic equestrian sports go hand in hand.

Other members of the UAE’s royal families have competed in the Olympics – and by the looks of things, we might have a few more contenders on our hands…