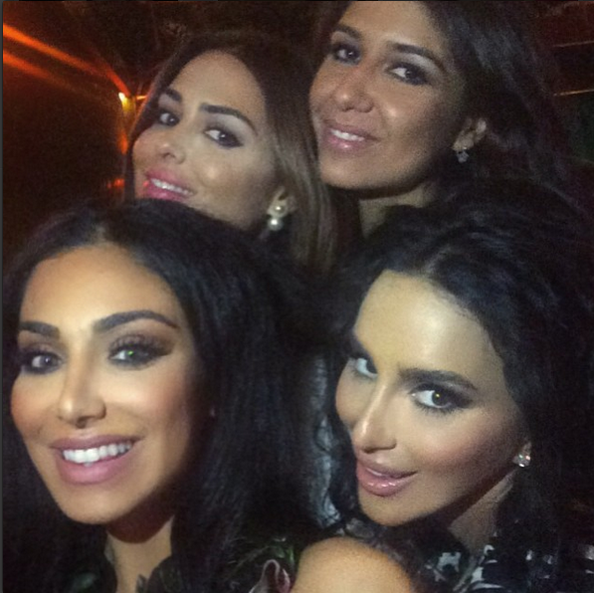 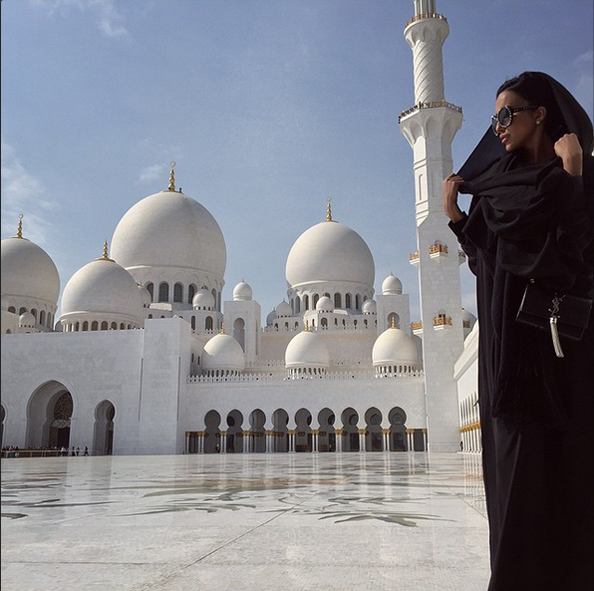 The UAE has become a hotspot for models, actors and reality stars, with the famous visitors taking in all the Emirates has to offer. The latest A-list tourist to hit our shores was Lilly Ghalichi, a former reality star from hit American TV show Shahs of Sunset. Emirates Woman looks inside her holiday album…

Iranian beauty, Lilly Ghalichi, began her trip to the UAE with a visit to Abu Dhabi’s Grand Mosque, and just like the scores of celebrities before her (Rihanna and Kendall Jenner to name a couple) she took the opportunity to pose in-front of the statuesque building wearing an abaya and headscarf. Of course, the fashionista accessorised the look with her statement designer sunnies and Saint Laurent monogramed shoulder bag (picture above).

Following her trip to the mosque, the 31 year old decided to explore more of the region’s culture and ventured into the desert with some friends, where she posted a picture of herself riding a camel. 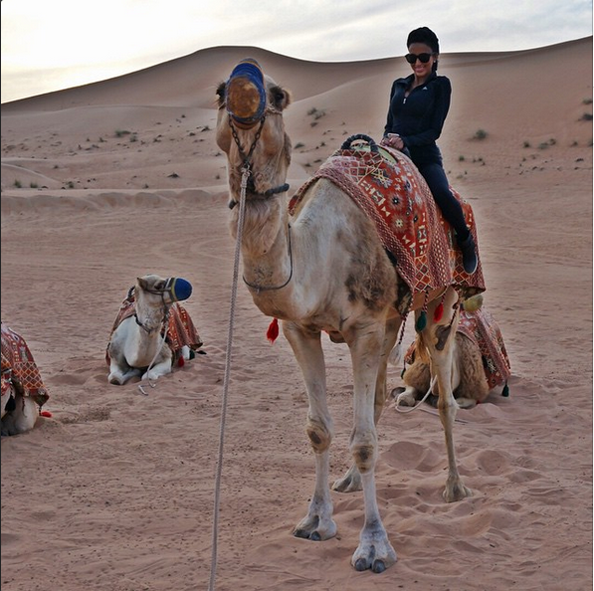 Lilly in the desert

However, as well as acquainting herself with the history and culture of the UAE, Lilly also explored the modern trends and tastemakers that have made Dubai a thriving metropolis. We all know the best way to see the city is from a bird’s eye view, and the stunning entrepreneur took advantage of her celebrity status with a private helicopter tour of Dubai at sunset. 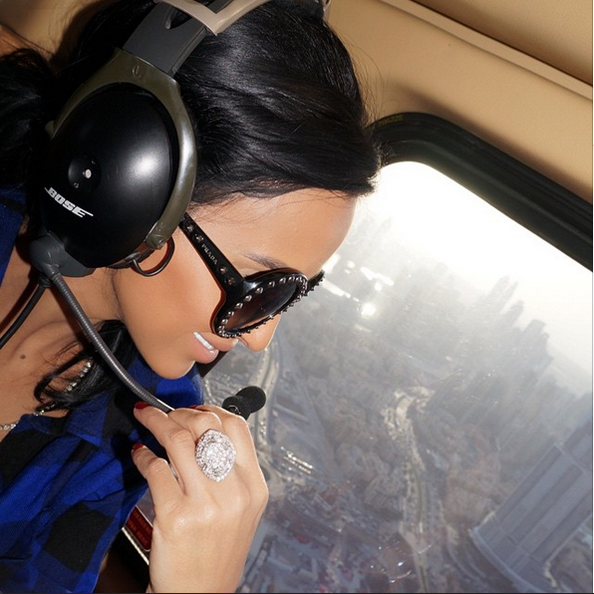 After exhausting her sightseeing options, the reality TV star caught up with the region’s tastemakers including local award-winning blogger and entrepreneur behind Huda Beauty, Huda Kattan. Lilly, who has her own line of lashes called Lilly Lashes, enjoyed playing around with the popular beauty buy Huda Lashes.‘’I had the pleasure of meeting and trying @hudabeauty’s line while I’m in Dubai…,” she posted onInstagram. “I love to see hard working women, and @hudabeauty @monakattan were two incredible, inspiration women I’m honoured to have met this trip.’’ 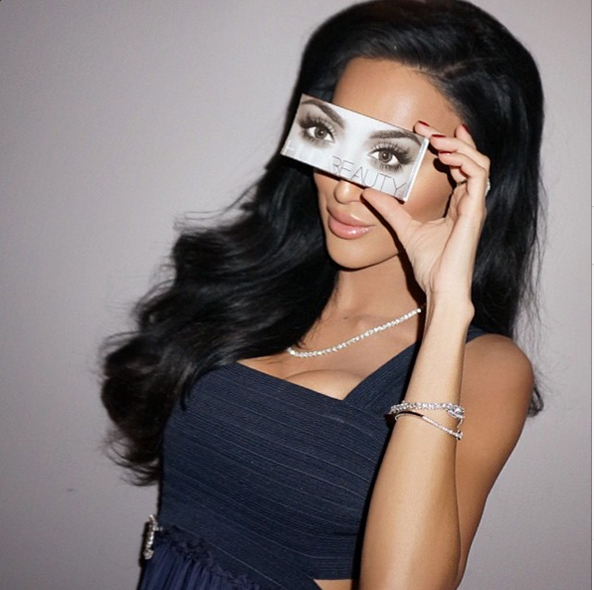 The beauty icon also immersed herself in the socialite scene as the guest of honour at a two-day make-up workshop held by popular beauty bloggers Sonia and Fyza Ali.

The stunning blogger wrapped up her trip with a fashion elite ladies dinner at Downtown hotspot, Toko Dubai. The gorgeous group comprised of Carla DiBello, American producer and gal pal of Kim Kardashian. Also in attendance was new friend, beauty blogger, Huda Kattan and Sophie Al Asfoor, the Bahrain based up-and-coming handbag designer, which Lilly herself is a fan off, owning a few of the unique bags herself. 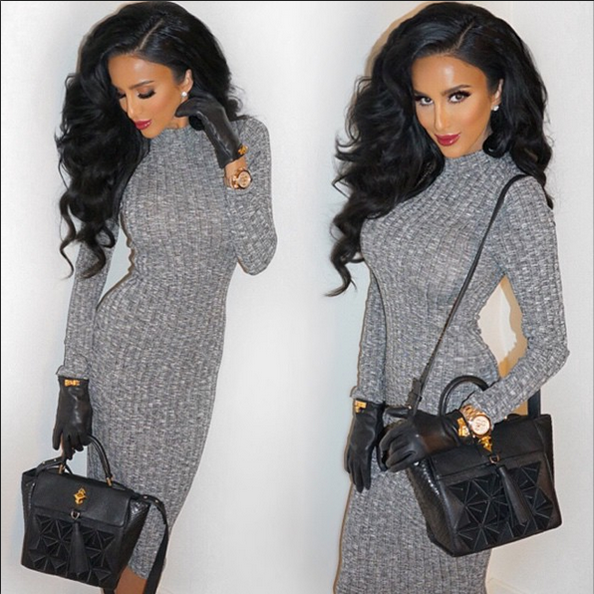 Neelufar Seyed Lilly Ghalichi, best known as Lilly Ghalichi, is a law graduate, blogger, designer and successful entrepreneur who first came on our radar back in 2012, when American reality TV series Shahs of Sunset debuted. The reality show follows a group of Iranian American friends living in Beverly Hills. Miss Ghalichi discontinued with the show at the end of season three. Her departure led to many industry rumours – some alleged she was fired because she was ‘boring’, other rumours believed the rest of the cast shunned her, however according to he lady herself she simply felt the show wasn’t a good fit for her anymore.

The multi-talented star has her star profile to continue with her own business ventures. Her successes include Lilly Hair, Lilly Lashes, Have Faith Swimgerie, Lilly Ghalichi Collection for WantMyLook online store, and most recently a jewellery line, Lilly Ghalichi by Avitan. After a successful trip to the UAE we wonder if we can expect her products in the region soon. With the star insisting she wants “to come back to Dubai.” we think it’s only a matter of time…