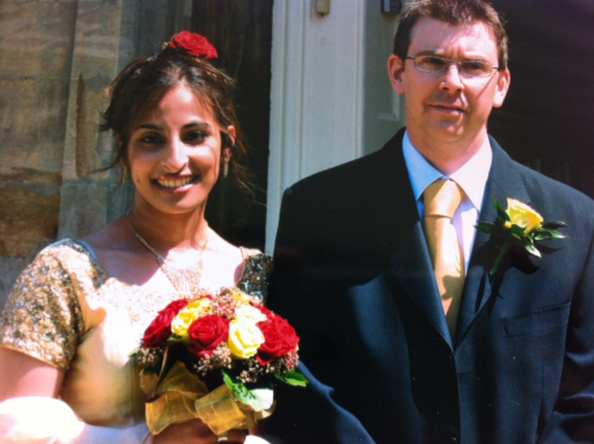 When Shamima met Russell she knew their relationship was doomed from the start.  She was from a devout Muslim family and he was a white Christian.  For seven years she kept him a secret from her family, who wanted her to have an arranged marriage.

When Russell proposed to her he had no idea her family would be opposed to it. Although he had never met them he presumed they knew about their relationship – they did not.

“It’s so difficult for women like me who have been brought up in very religious families,” says Shamima. “At 14 I was already engaged and set to marry an Indian man my family had chosen for me.

“I wasn’t even an adult and barely understood relationships, let alone marriage. Luckily, after a three year engagement we both decided it wasn’t going to work and broke it off. If that didn’t happen I would have be living a very different life right now.”

Growing up, Shamima, one of three, knew her life would be mapped out for her.  It’s common in some religious families for daughters to be matched with a chosen suitor – often someone from their previous homeland. At 14, while on her way to India Shamima and her family passed through Kuwait to meet up with relatives who lived there. “They looked me up and down,” she says, “and the following day they introduced me to an 18-year-old male, who owned a clothes shop in a market.”

Later on, Shamima’s parents told her they had chosen him to be her husband. “Although he was nice, I didn’t fancy him,” she says. “I became very upset at the prospect of marriage.”

Within three days, the pair’s families declared that they were engaged.

Once back in the UK, her parents encouraged her to write love letter to her would-be suitor. However, after a three-year engagement she plucked up the courage and told her parents she wasn’t going to marry him and the engagement was reluctantly cancelled.

Four years later, Shamima enrolled at Preston University to study nursing. Although she wanted to move to London to study, she wasn’t allowed to live away from home. Preston was only 20 miles away.

At university she made a lot of friends and was gaining attention from some men. While she never saw dating as an option because of her parent’s strict religious beliefs, Shamima’s parents and relatives in India were becoming concerned that she was becoming too westernised – they didn’t understand why she wasn’t married, or at least engaged.

The prospect of having to enter into an arranged marriage and move to India petrified Shamima, especially when her parents were travelling to their homeland for her brothers wedding. Unable to afford to travel with them, Shamima stayed in the UK. For the first time she was able to do as he wanted. She started going to parties and started being “free”. During this period Shamima met Russell.

Knowing her family wouldn’t approve of her dating a white, non-Muslim man, the pair started secretly dating and fell head over heels in love.

Telling her family she was meeting a friend, Shamima would sneak off and meet up with Russell.  Though racked with guilt she knew her relationship with Russell was getting more serious. However, to placate her parents she signed up to online Asian dating websites in an attempt to find a suitable partner, but she never met anyone who compared to Russell. 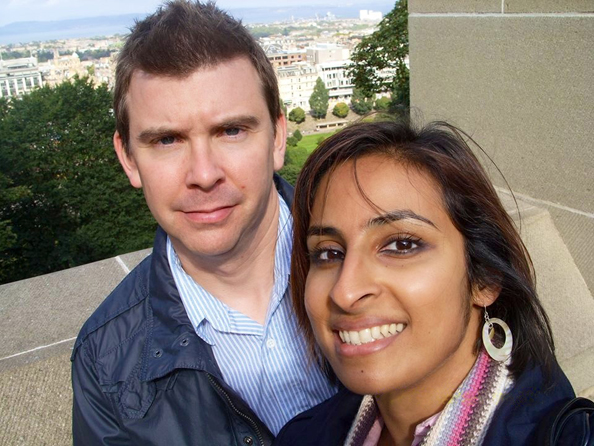 Neither Russell or Shamima’s family knew of her double life, which continued for seven years, until 2007 when Russell proposed on New Year’s Eve. Shamima said yes, which meant she would have to reveal her secret.

“My dad practically fainted when I told him,” she says. “Both of my parents were deeply disappointed and ashamed and told me I had to give him up.”

Shamima’s parents took her to a Mosque to see a priest and told her she’d shamed her family and needed to go to India to cleanse herself and “find her way”.

Russell was understanding about the predicament and vowed to stand by her. However, Shamima’s parents had other ideas, forbidding her from seeing her fiancé. After several months without the man she loved, Shamima became hugely depressed. Recognising the suffering their daughter was going through, her parents eventually relented, on one condition – Russell had to convert to Islam.

Despite being a devout Christian, Russell, desperate to be with the woman he loved, followed her parents’ wishes and the pair finally wed in the summer of 2007. Three years after their wedding Shamima gave birth to their adorable son Daniel, and, despite initial feelings, all the family are accepting and happy, proving that true love does prevail .