When it comes to the Kardashian-Jenners, it’s almost impossible to keep anything under wraps as eagle-eyed fans are always keeping a close eye on their every move.

Having just confirmed her pregnancy, fans of Kylie Jenner have been keeping a close eye on her Instagram posts and it seems some are convinced they have figured out her due date, despite the makeup mogul not having confirmed at all how far along she is in her pregnancy.

So, how exactly have they done this? Besides gauging from how big the 24-year-old’s bump is, fans have taken a closer look at Kylie’s pregnancy reveal video.

In the video, we see a sweet moment of Kylie and Stormi revealing the news to Kris Jenner. Stormi walks up to ‘Lovey’ – what the Kardashian-Jenner children call their grandmother – with an envelope containing the sonograms from Kylie’s ultrasound. Clearly taken aback, Kris responds saying, “What is this – are you pregnant?”

In the footage, Kris is seeing a set of very colourful pyjamas and some fans on Reddit have managed to pinpoint exactly when the momager was wearing this set and they believe it corresponds to how far along Kylie is in her pregnancy. 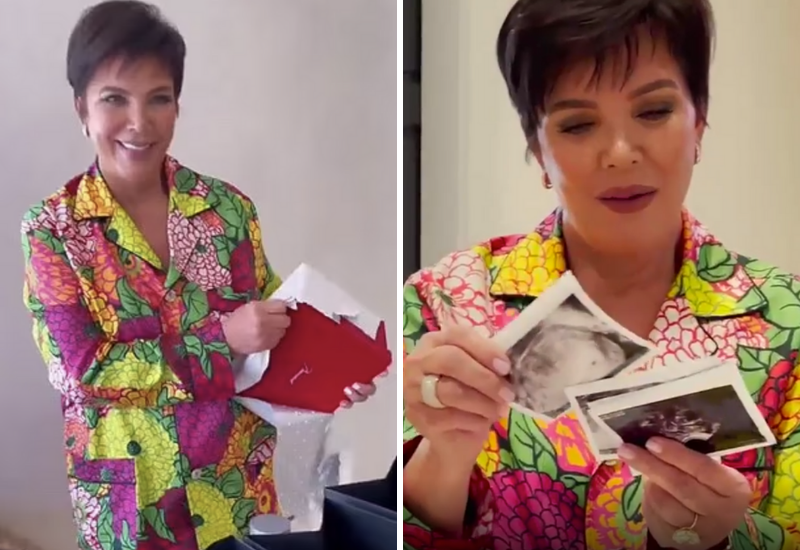 (Left: The photo of Kris Jenner posted by Kim on Mother’s Day this year. Right: The momager wears the same PJs in Kylie’s pregnancy reveal video.)

The Reddit user points out that Kylie’s elder sister, Kim Kardashian, had posted an Instagram story of Kris wearing the same set of pyjamas on Mother’s Day, May 9, 2021.

Connecting the dots, the fan presumed Kylie giving her mum a sonogram from her pregnancy would mean she would have been around six weeks pregnant ( the first sonograms usually occur between weeks six to eight of pregnancy).

“If this was ~week 6, the first day of Kylie’s pregnancy would’ve been March 28,” the fan pin-pointed. “This puts her at about 23 weeks along, making her due date January 2!”

However, neither Kylie or baby daddy Travis Scott have confirmed the official due date of their impending arrival, nor have they confirmed the gender of the baby.