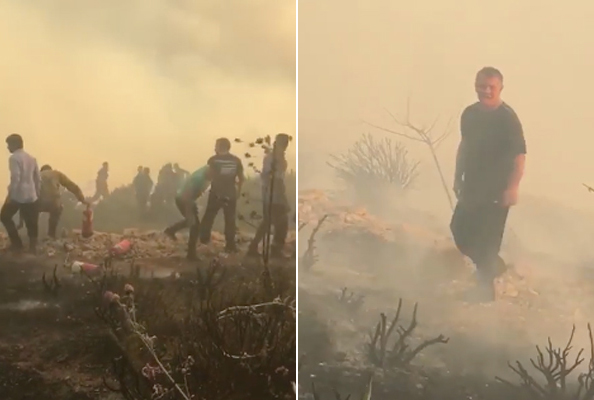 With his military background, King Abdullah II of Jordan likely has some extensive training in emergency response scenarios.

And the royal put those skills to the test this week, after rushing to help extinguish a fire that had taken hold near his palace.

The blaze struck the area of Kamaliyya, a mountainous range on the outskirts of Amman that edges the royal residence.

Read:
15 Of Our Favourite Snaps From Queen Rania’s Family Album
This Baby Born On A Flight From Saudi Will Get Free Trips For Life

Luckily, no one was injured in the fire after a host of emergency responders and volunteers rushed to the scene.

In a short clip that’s since gone viral, the King can reportedly be seen joining in with relief efforts, passing fire extinguishers to those fighting back the flames.

The 55-year-old later took to his Twitter account to thank those that helped put the blaze out.

Read:
What Happened When Queen Rania Met First Lady Melania Trump
Queen Rania Has Won A Humanitarian Award For Her Work With Refugees

“By the grace of the brave of all the military and civil devices, the fire of Kamaliyya was extinguished yesterday, thank you for all the efforts that they have made, God save you and save Jordan,” the tweet reads, according to Al Arabiya.

The King, who has reigned since 1999, trained at the UK’s Royal Military Academy Sandhurst, the same military school currently attended by his son, Crown Prince Hussein.

He shares four children with his wife, HRH Queen Rania, and we’re sure the five of them are pretty proud of the royal’s heroic actions right now…