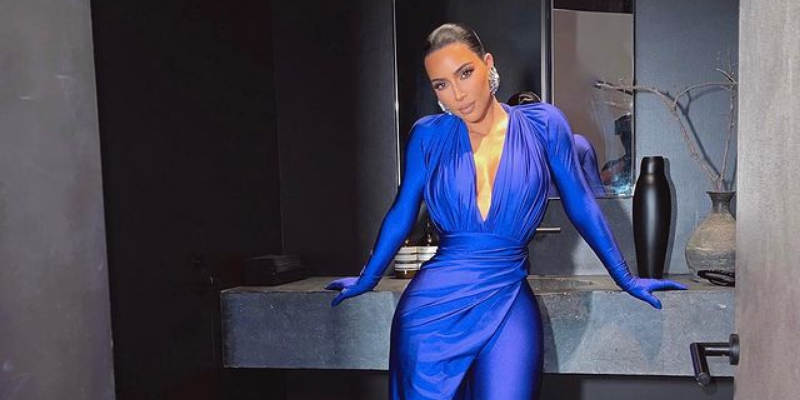 A few years ago, Kim Kardashian began her journey to becoming a fully qualified lawyer, following in the footsteps of her late father, Robert Kardashian who was a very successful attorney.

The reality star is on the path to becoming a lawyer by doing a four-year law apprenticeship in California, one of the few places in the USA that offers a different path to becoming an attorney rather than law school.

Through this avenue, Kim is required to take a series of exams, one of them being the ‘Baby Bar’ exam. However, the beauty mogul has previously been unsuccessful three times.

But now Kim is one step closer to becoming a qualified lawyer as on her fourth attempt, she passed the exam and she shared the joyous news with her 269 million followers.

And, of course, celebrating in true Kim K style she was wearing head-to-toe Balenciaga in a jaw-dropping royal blue ensemble.

“Looking in the mirror, I am really proud of the woman looking back today in the reflection,” she said in the caption of the photo. “For anyone who doesn’t know my law school journey, know this wasn’t easy or handed to me.

“I failed this exam 3 times in 2 years, but I got back up each time and studied harder and tried again until I did it!!! (I did have COVID on the 3rd try w a 104 fever but I’m not making excuses!).”

Kim went on to share that some lawyers had told her it “a close to impossible journey and harder than the traditional law school route but it was my only option and it feels so so sooooo good to be here and on my way to achieving my goals”.

The 40-year-old also acknowledged how proud her late father would be of her.

Kim has still got a bit of a journey to go before becoming a fully qualified lawyer and this includes passing two more exams and being deemed a “good moral of character”.