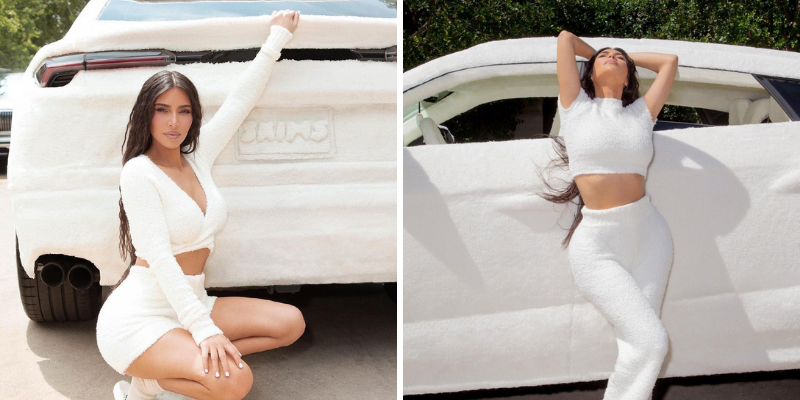 Just when you thought Kim Kardashian wouldn’t be able to pull another noteworthy stunt out of the bag, she matches her outfit to a brand new Lamborghini Urus.

Not only did she match her outfit, but she coated the fast car in fleece as white as the snow to match her Skims ‘Cozy’ ensemble. Bizarre, yet brilliant at the same time.

The reality star and entrepreneur first posted the images to her Instagram earlier this week showcasing her “Lamb-bo”.

“KIMMY HAD A LITTLE LAMB-BO!!! OMG isn’t this the cutest and funniest thing ever???” she said, also adding in a video post, “My new ride is here. … I am actually dying. It is so cute.”

Following up with more snippets of the brand new car the next day, Kardashian revealed it was a Lamborghini Urus that was covered in her Skims ‘Cozy’ collections fabric – even the inside was coated in the fluffy fabric.

The twinning outfit to her car stirred up quite the reaction with some stating the stunt was a waste of money and fabric.

One of Kardashian’s close friends, Paris Hilton, even commented saying, “You know you’re rich rich when you can ruin a very expensive car for something like this!” However, she was definitely being light-hearted with the added ‘tears of joy’ emoji.

Meanwhile, many on Twitter were in disbelief about the stunt.

The worst Lambo in the world belongs to Kim Kardashian

Others were rather confused by the car and questioned how she’d actually be able to wash it.

Kim Kardashian has a fuzzy car. Like not just the interior. The outside too. Think about the BUGS KIM. IT WILL BE SO HARD TO WASH. WHERE WOULD YOU EVEN TAKE IT? A DOG GROOMER???????

In an advert that was doing the rounds on the internet, Kardashian was seen wearing a pair of nude Skims underwear.

The reality star is seen running her fingers down her waist into her hips. However, as her finger traces her hourglass shape, it appears to distort in the video across the curve of her body.

The ad was posted on TikTok and has subsequently received over 21.5 million views with many questioning the ad, with the user who posted the advert on the video-sharing platform asking, “Who approved of this editing?”

As the video went viral on TikTok, many users had a lot to say with one person calling the advert “unfortunate”.

“They literally create this beauty standard but can’t even keep it up,” one other said, with many others echoing the same sentiment.

However, according to Page Six – who claim to have a different version of the ad – the commercial circulating has an “error” in it.

“The Skims commercial that aired last week featuring the Fits Everybody collection did initially have an error as a result of the video losing its quality during the uploading process,” a Skims spokesperson told the outlet.

“Immediately after it was noticed by the team, the video was pulled, and the glitch-free version was uploaded and ran for the remainder of the time on air. We apologize for any inconvenience this has caused Kim and our customers.”