Just What Are These Giant Letters Sprouting Up Around Dubai? 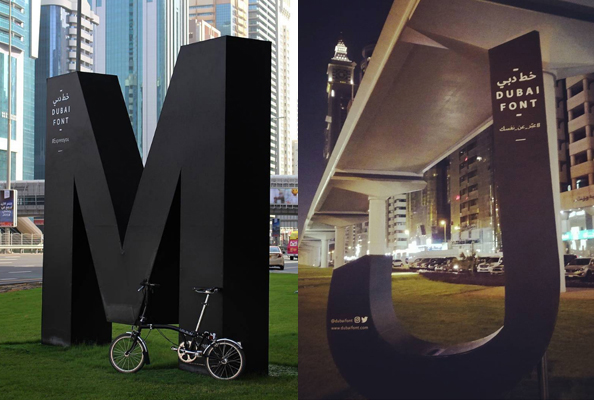 Noticed an alphabet of sorts springing up around the city? Here is what it means.

If, like us, you’ve driven down Sheikh Zayed recently, you might have been perplexed by the giant M that’s been erected on the roadside.

Is it for the Bond character? Is it something to do with traffic rules? Not quite.

It’s all to do with the Dubai Font. Yes, we’re the first city to have its own typeface, and now you can see examples of it across Dubai.

B: Bold. Be Bold, Be Brave and Be You. Overcoming what you think you can’t do is what will drive you to where you want to go. This was the inspiration when creating Dubai Font .. the merit of the city of #Dubai #Expressyou with #DubaiFont 📷 @chinitaloca23

Read:
Tickets For This Long-Awaited Water Show Are About To Go On Sale…
9 Of The Best Spa Deals You Can Find In The UAE This Ramadan

HH Sheikh Hamdan bin Mohammad Al Maktoum, Crown Prince of Dubai and Chairman of the Executive Council, revealed the new font earlier this month, and it’s available for both Latin and Arabic characters.

The royal has even decreed that all government institutions must use the new font in all future correspondence, according to our pals at What’s On Dubai.

“The launch of the Dubai Font to the world is a very important step for us as part of our continuous efforts to be ranked first in the digital world,” said Sheikh Hamdan, who worked closely with its development.

“We are confident that this new font and its unique specifications will prove popular online and in smart technologies across the world.”

The font (which you can download online, just click here) was created with Microsoft – the first time the computing giant has created a typeface with a city.

It’s available in regular, light, medium and bold, and will be available to Microsoft’s more than 100 million Office 365 users.

Dubai Font font was designed simultaneously in both Arabic and Latin to create harmony between them. It reflects modernity inspired by the city. @wkhrait have made this to show the 4 weights of Dubai font. He says: “I guess Graphics, art and media people breathed a sigh of relief!” If you are in the creative field, share with us your artworks reflecting the harmony between the Arabic and Latin fonts. #Expressyou with #DubaiFont

Read:
The Next Musical Coming To Dubai Opera Is A Biggie…
This New App Could Make Online Shopping In The UAE A Whole Lot Easier

But if you want to see it beyond the bounds of your computer screen, head down to Sheikh Zayed Road, Sheikh Mohammed Bin Rashid Boulevard, Dubai Mall and Kite Beach.

(You can also find some on other key roads across the city).

#Expressyou @thedubaimall #Repost ・・・ Reflecting the union of heritage and innovation, we are excited to introduce a #DubaiFont sculpture near the Botero Horse. Be one of the first to snap yourself against our iconic background and join the celebration of this visionary initiative. #dubaifont #expressyou #sculpture #iconic #mydubai @dubaifont #thedubaimall

The giant letters form part of a campaign called Express You, which has been designed to encourage “reading, writing and-self expression” in the emirate.

Both Latin and Arabic characters have sprung up around the city, with many people snapping pictures of them and sharing them on social media.

So, here are another lot of landmarks to include in your Dubai travel snaps, summer visitors…