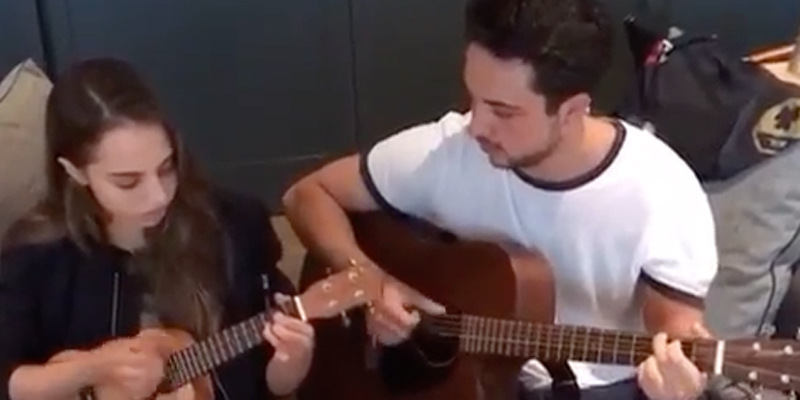 The royal enjoyed a jamming session with Princess Salma over the weekend.

He’s not long returned to Jordan after graduating from a prestigious British military school.

And Crown Prince Hussein has certainly been enjoying a spot of family time since jetting back to his homeland.

The royal, who took part in his passing-out parade at the Sandhurst Military Academy earlier this month, has been busy bonding with his younger siblings after months away, according to his social media accounts.

Read:
This Dubai ‘burb has just been confirmed as one of the world’s coolest
These 40 apps will make life in the UAE so much easier…

The heir had a jamming session with younger sister Princess Salma over the weekend, and shared a short clip of the two strumming away:

Sixteen-year-old Salma is pretty talented on that ukulele, hey?

However it’s little surprise, as the accomplished family are known to have many varied hobbies and interests.

The Crown Prince alone, who graduated from Georgetown University in the United States last year, is a football fan, a motorbike aficionado, and can co-pilot a chopper.

(Our CVs now feel ever so short).

His proud mother, Queen Rania Al-Abdullah, also shared a clip of the guitar session, which has racked up more than 230,000 views in just 12 hours.

Read:
Five liquid eyeliners that last all day (even in summer)
Ones to watch: Our favourite models from the region

It’s not known exactly what Crown Prince Hussein, who’s the youngest person ever to chair a UN Security Council Meeting, will do after graduating from Sandhurst, but we’ll be keeping you posted.

In the meantime, here are a few of our favourite snaps of the royal with his family (just what we need to distract ourselves from the fact it’s Sunday).