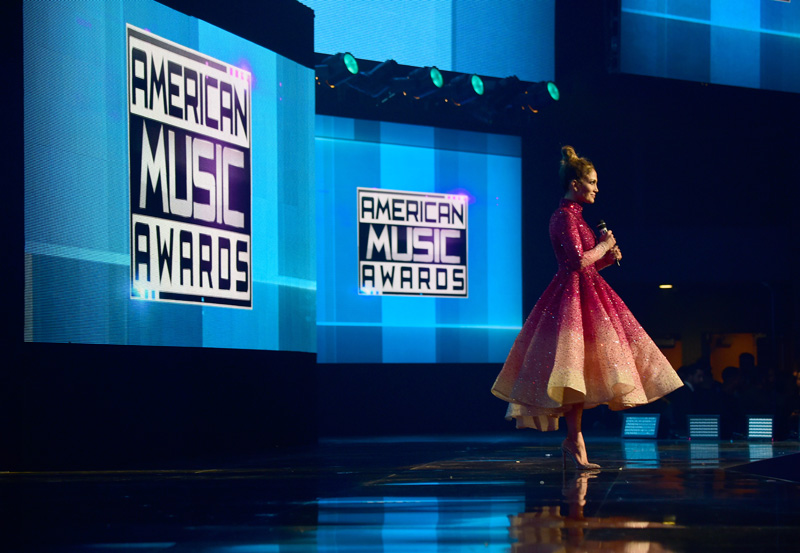 Dubai was represented at the American Music Awards in LA last night as Jennifer Lopez trotted out on stage in a gorgeous high-necked, long-sleeve ombré gown by locally-based designer Michael Cinco. Go Michael!

The Dubai-based Filipino fashion mind is best known for his couture gowns, and he has an impressive list of accolades and celebrity clients. In fact, it seems Jennifer Lopez just can’t get enough

After finishing an opening performance at the big awards show, Jennifer Lopez left the stage to return in a crystallised fuschia ombré 50s-style dress by Dubai-based designer Michael Cinco. That full skirt? The stuff dreams are made of…

Michael Cinco moved back to Dubai and established his company Michael Cinco Couture back in 2003, going on to design and create both wedding gowns and couture dresses for royals in the Gulf.

After a successful performance at a gala show in the Philippine Fashion Week Holiday 2009, Michael started to gain recognition amongst the celeb crowd, attracting a flood of overseas elite clientele looking to snatch up some of his work. 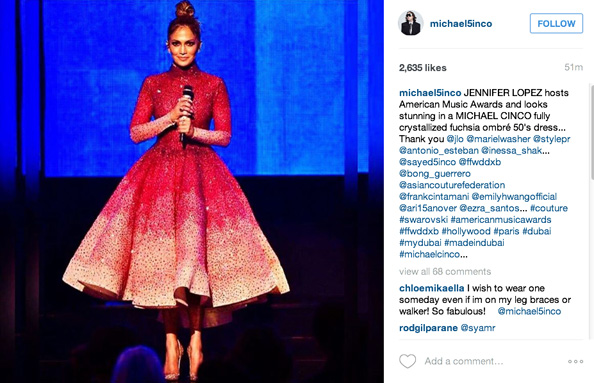 Here’s J-Lo’s dress on the runway:

Throughout his career, Cinco has accrued a series of impressive accolades, including but not limited to the 2011 Breakthrough Designer Award from the WGSN Global Fashion Awards, and the Presidential Award for Outstanding Filipinos Overseas from President Benigno Aquino Jr in 2014.

It was Michael’s deep interest in the glamorous women of classic Hollywood movies that inspired him to take up fashion as a career path. The elegance of sophisticated women such as Joan Crawford and Audrey Hepburn made such an impression on him that Michael dreamed of dressing them up in his own creations, driving him towards his being a successful couture designer.

Let’s end with one of our favourite, very Michael quotes: “A Michael Cinco woman is moneyed. She may not be born into royalty but she better be married into one. My clothes appear seamless. They look heavy and yet they float. They look expensive simply because they are.”