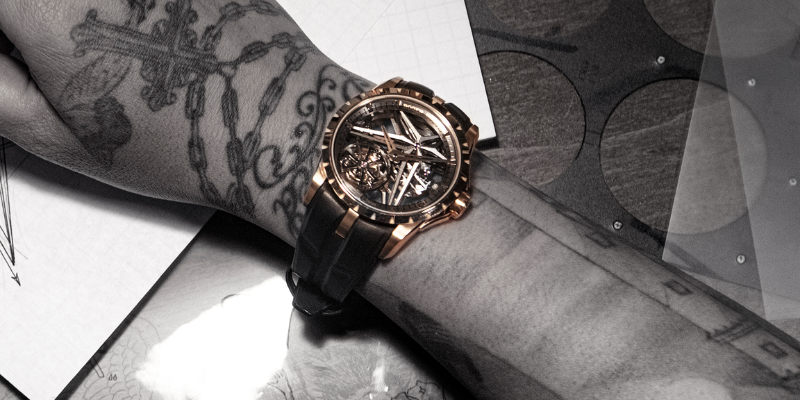 Consider Geneva-headquartered Roger Dubuis to be a tourbillon specialist. Flying tourbillons and double tourbillons are a regular part of the mix. A few years ago, it even attempted to rewrite the concept and purpose of a tourbillon by having four balances instead of tourbillons – as was the case with the Quatuor.

This year, the watchmaker decided to introduce an all-new timepiece that features a single tourbillon, the Excalibur Single Flying Tourbillon, and demonstrate with it just why Roger Dubuis is at the top of its game.

Mind you, Roger Dubuis timepieces aren’t built to be timid creations, hidden under the cuff of a shirt. They’re bold, statement pieces that write their own rulebook, rather than adhere to one.

The new Excalibur Single Flying Tourbillon collection introduced at this year’s Watches & Wonders includes three main models. The 42mm wristbound heroes are offered in case options of cobalt, dark grey DLC titanium and Eon Gold which is a pink gold variant. Each of them is limited to 88 pieces.

Unlike previous Single Flying Tourbillons, the cases on the latest collection are slimmer, though not any less striking. At 12.7mm tall, it’s not about to escape unnoticed on your wrist.

The new Poinçon de Genève RD512SQ calibre has been completely reworked, with the Roger Dubuis star repositioned and the tourbillon now featuring titanium in the lower cage and cobalt chrome in the upper cage. The power reserve on the manually wound timepiece has also increased to 72 hours.

But apart from the three models, Roger Dubuis also showcased a special boutique edition of the Excalibur Single Flying Tourbillon with an Eon gold bezel set with 60 baguette-cut diamonds, limited to just eight pieces. But this being Roger Dubuis, the mere presence of diamonds would never be enough. Hence, the team went one step further and coated the diamonds with Super-Luminova from where the model derives its name – Glow Me Up.

The result is a bedazzling spectacle. When the lights go out, the diamonds light up. To add to the drama, the characteristic star-shaped bridges on the skeletonized movement on the dial, as well as the hour markers, the tips of the hands and the tourbillon cage are also coated in Super-Luminova.

To mark the new collection, Roger Dubuis partnered with tattoo artist Dr. Woo, graffiti ace Gully and mixed-media artist Liu Wei. The trio represents a subculture within a subculture, and a healthy rebellious no-holds-barred attitude on the side – not dissimilar to the one Roger Dubuis or any of these Excalibur Single Flying Tourbillons, not least the Glow Me Up model, exude in abundance.