Paige Spiranac In Dubai: “Could Somebody Please Ask Me Out On A Date?” 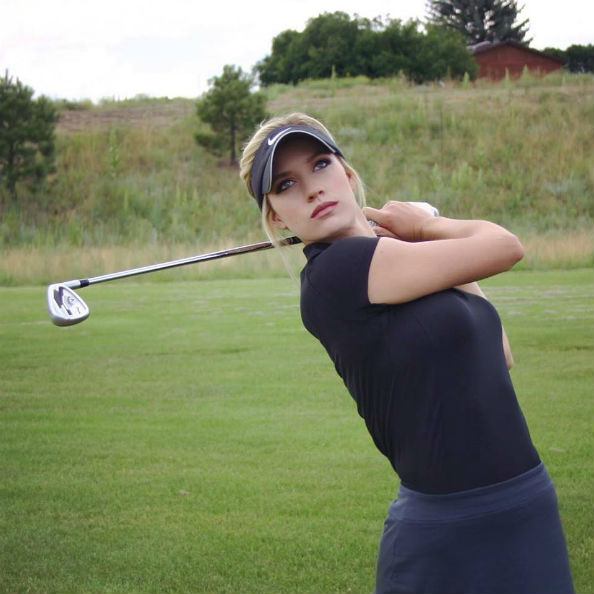 With the Omega Dubai Ladies Masters golf tournament set to kick off tomorrow (December 9), Emirates Woman managed to get a sit-down with one woman whose Hollywood looks and incredible skills have recently seen her change the face of pro golf in more ways than you could imagine…

Recently dubbed “the hottest female athlete on Earth”, pro female golfer Paige Spiranac, who has a figure that even Elle Macpherson would envy, is turning heads both on social media and on the course as she sets to make her debut on the professional golf circuit.

Having only recently turned pro, the 22-year-old American is in Dubai to compete in the Omega Dubai Ladies Masters in her first professional tournament. With 51.3k followers on Twitter and 472k on Instagram, she’s already used to having a large fan base, something we predict it will only get bigger after this tournament.

Paige’s Dubai press conference was testament to her popularity – as far as crowds go, it was one of the biggest and most hyped in the tournament in spite of her being only relatively new. 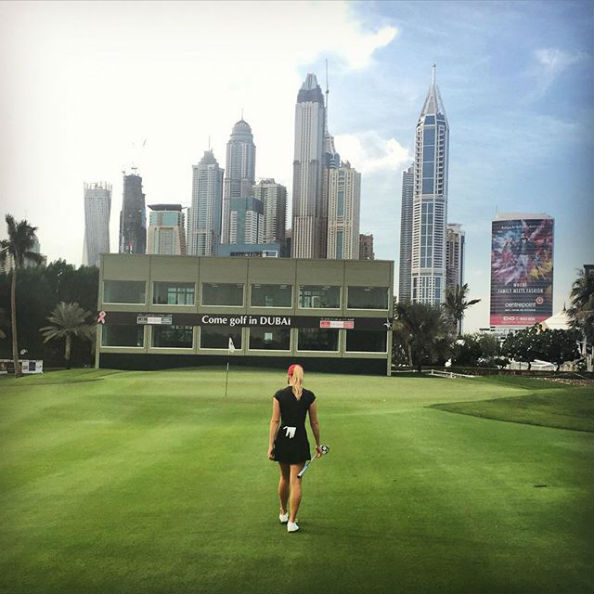 Compared to other pro golfers Paige’s introduction to the game at a professional level was relatively late. The daughter of a college footballer and a professional ballet dancer, and sister to a heptathlete and rower, Paige was always destined for sporting success.

Initially a gymnast with the Olympics in mind, Paige found solace in golf after a couple of bad injuries forced her to quit, pushing her out of the gym and onto the course. After a successful spree with the San Diego State University’s golf team, Paige went pro this August after her graduation, and has since been riding the accompanying roller-coaster that comes with new found fame.

Here, Emirates Woman talks about being a nerd, being hopeless in love and sporting heroes with Paige Spiranac in Dubai:

No! (Laughs) I’ve travelled before for golf, but it’s my first time out of the country. And with it being Dubai, it’s pretty cool.

It’s awesome isn’t it. To me it’s like SimCity, it’s like somebody went, ‘I’ll have that there, and the biggest mall over there…’

It’s funny you say that, when I first got here I said to my sister, ‘have you ever played the Sims? And you just like build whatever you want to build? That’s Dubai.’ I saw a diamond-encrusted Mercedes, yesterday. It’s [so] Dubai! (Laughs). Yeah but it’s cool to be here and see that, you hear all the stories about it and everyone who has been here says it’s awesome. So to actually be here and see it in person is just amazing.

So what would you be doing if you weren’t pursuing golf? Weren’t you planning on going into communications?

Well, it’s funny. I did communications because one of my biggest fears is public speaking, and I hate it so much some times, just being in front of the camera and being around people and talking. So it’s funny that now I’m doing all of this. I wanted to be a golf professional, but teaching. 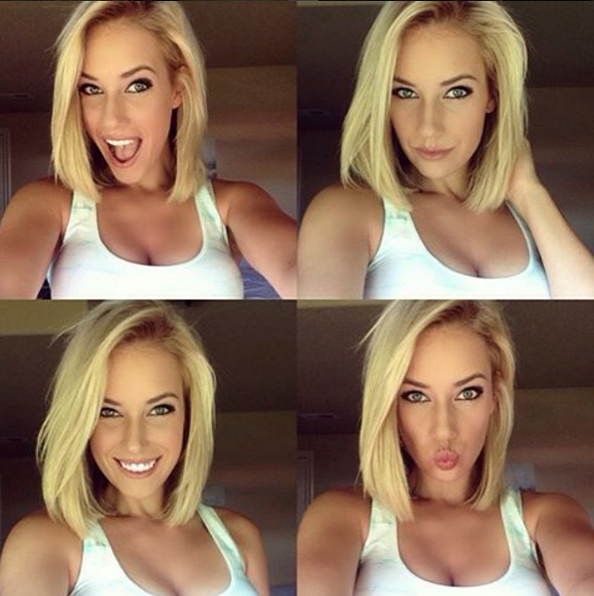 This must all be quite new to you, is it still quite scary having cameras in your face?

Yeah, I did some stuff with Callaway. I signed with them on the media side so I do some of their production stuff. There was a camera in my face, and all these people around, and they were like: ‘OK go!’, and I was like, ‘Hi, golf, Paige, I play’. I mixed it up, and everyone was just like ‘why is she here?’ (laughs). But you get more comfortable with it. I just try to be myself, and hopefully that comes across.

So what is it exactly about golf that you love?

Coming from gymnastics, you were judged. You could do a perfect routine and if it didn’t please the judge then you weren’t going to win. That can be a little bit frustrating. With golf, however, it’s all on yourself, which is both good and bad because you really have nothing to blame it on.

Do you play every single day?

I try to. I love going out late at night, when no-one else is around, and just playing. It’s therapeutic to me. I’ll usually try to take one day off though so I don’t make myself go crazy.

My schedule changes pretty much all the time. I usually get up around 6am, do some putting then I’ll go and workout and get lunch. Then I’ll come back to the course and play nine or 18 holes, and practice some more. 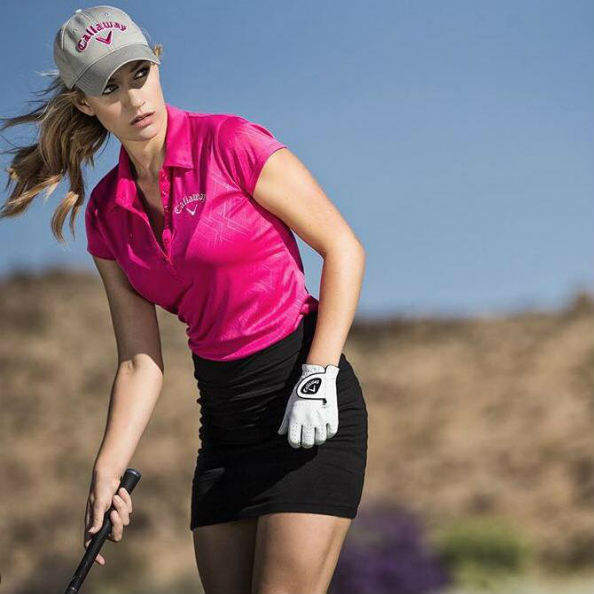 Now you’ve turned pro, do you see yourself  taking on the role as  a ‘poster girl’ for female empowerment, just like Ronda Rousey did with martial arts?

Ronda Rousey is one of my idols, she’s all about female empowerment. She proves you can be strong while also looking really pretty in a dress (laughs). Hopefully I’ll inspire some people to pick up the game. That’d mean a lot to me. In terms of male role models it has to be Tiger Woods and Adam Scott, he has such a great swing.

How quickly did you become ‘Insta-famous’?

Related Story: How To Be Insta-Famous

Were you this cool growing up?

I was definitely not the cool kid in school. I was actually homeschooled, so I was just very shy and kind of introverted in social situations. I was like the kid underneath the playground, eating dirt with no friends. The way I got into sports was through not really having any friends – I spent more hours in the gym.

So is that where your love for comic books stems from?

Yeah! I’m very nerdy and proud of it. People presume  I’m a certain way based on my Instagram, or based on how I look. I’m really the opposite of everything that people usually think. 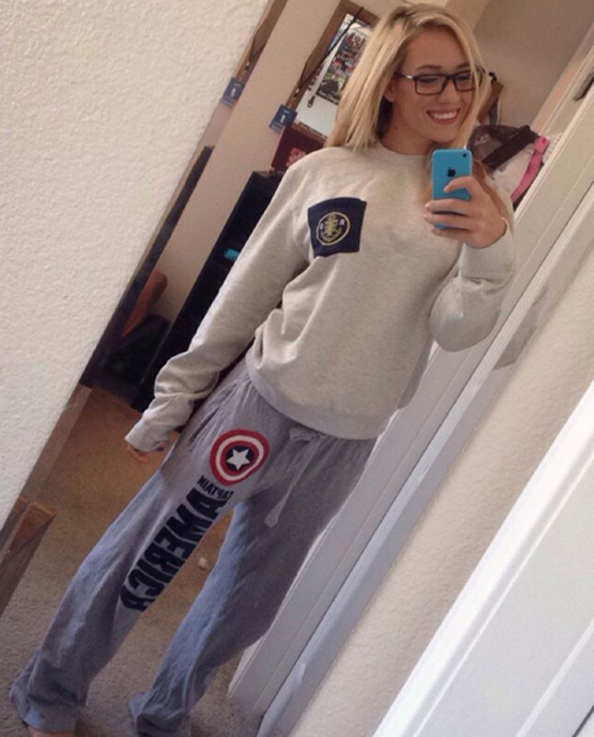 I read you receive a lot of marriage proposals through Instagram. How’s that going?

It’s so funny, I’ll get marriage proposals and I’ll get asked out through social media, then it comes to real life and it’s like, zero. I’m just like: ‘Could somebody please ask me out on a date?’

I’ll usually do a protein shake for breakfast. Then I’ll do a salad for lunch, then for dinner it’s usually grilled chicken or salmon. I eat a lot of veggies. I try not to be too strict though, because I think you have to have a good balance with everything. So I still indulge when I feel like it.

What about the gym? Do you have a specific programme that you follow?

When I’m in tournament mode, I feel better when I have more muscle, so I’ll do more heavy lifting, and focus on my core. When I’m not, I’ll do more running. 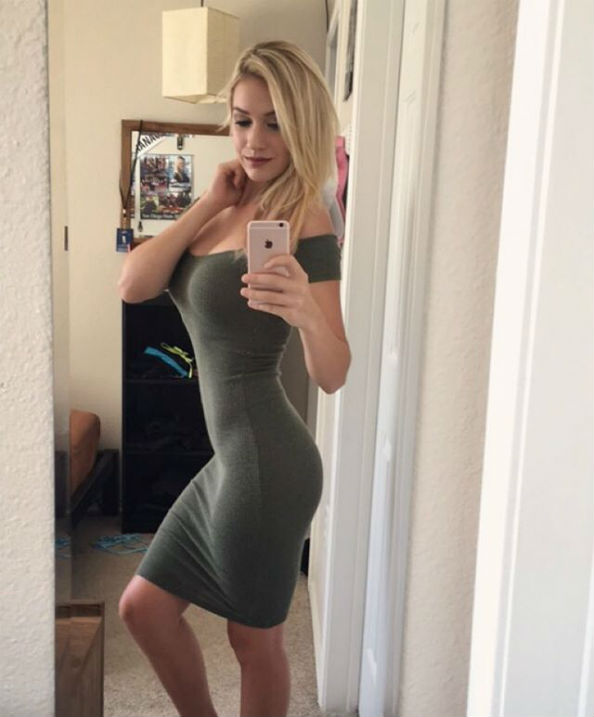 What would you say has been your biggest hurdle so far?

Just dealing with expectations, and the pressure and my nerves. I know it’s all self-induced when it comes down to it, but I don’t want to disappoint anyone. I want to be more than just an ‘Instagram model’ per se. I’m a good golfer and I do put a lot of time into it.

I am coming to play in the Omega Dubai Ladies Masters from December 9th to 12th…come and watch me play at Emirates Golf Club…entry is FREE so there are no excuses!! #MyDubai #Emirates #GolfinDubai   A video posted by Paige Spiranac (@_paige.renee) on Nov 24, 2015 at 7:51am PST

I want to join the Ladies Professional Golf Association. There’s two ways to go about it. You have to go through qualifying school. The last one just happened, I didn’t sign up for the first stage of it, so I’m going to have to wait until the next time it comes around. Which I think is good, because i’ll have more time to develop my game. It’s all been very overwhelming and has been happening really fast, so I’m glad that I’ll have some time to kind of work into it. I don’t really know what’s going to happen, or how it’s going to turn out, but I’m just trying to enjoy it as much as I can.