#InMyBurkini: One Woman’s Campaign To Change Stereotypes About Modesty Swimwear 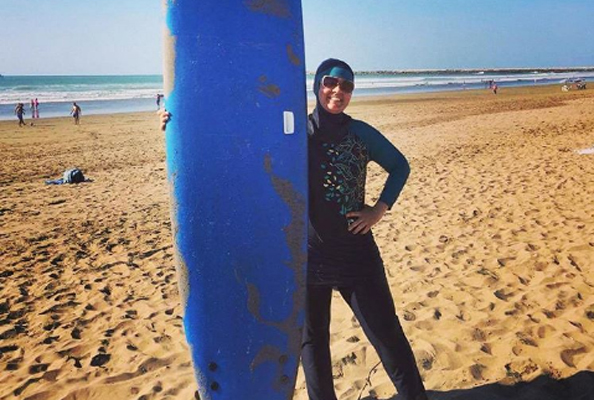 To some it’s just swimwear, but to others it’s seen as a political statement.

And in France, thanks to a recent law change, wearing this item is actually illegal.

However one local woman is on a mission to dispel prejudices around the burkini, and has started a social media campaign to champion the piece of modesty fashion.

Using the hashtag #InMyBurkini, UAE-based blogger Soukaina Rachidi is currently posting a daily image of herself in the full-coverage swimsuit to “step out of the stereotype that is attached to my identity”.

“I am determined to… be exactly who I am, for myself and others, in the very thing that people seem to misunderstand and fear: my burkini,” the Moroccan-born and US-educated Rachidi wrote on her website.

The blogger was inspired to start her photo series after a holiday in her homeland, where she swam, surfed and just generally had a good time in her modest swimwear.

Read:
Now The Burkini Is Banned! Reactions Around The World
Bulgaria Is The Latest Country To Ban The Burqa
10 Countries Where Women Are Forbidden To Wear The Veil
5 Most Common Stereotypes About Women Who Wear Hijabs

“Sometimes, I struggle to understand how wearing a lot of nylon could be offensive or even illegal. But then I remember that it’s not about the glorious amount of nylon that I wear when I swim or the fact that I cover my head. It’s about the lack of constructive dialog about these topics in our global communities,” she wrote.

“It’s about people’s insatiable desire to take offence to everything and shut down or to make hasty judgements with incomplete or inaccurate information. Neither side is doing justice to themselves, or others, and yet both sides feel justified in their incorrect behaviour.”

Photo Series Day 2: Reading #InMyBurkini I love to read because it allows me to see the world through other people’s eyes. Regardless of whether I’m reading fiction or non-fiction, I always try to find wisdom in the books I read, so I can become I become a better version of myself and share my knowledge and epiphanies with others. Be inspired: Wondering what I’m reading in this picture? I’m reading a phenomenal book called “Paradise Under Her Feet: How Women are Transforming the Middle East” by Isobel Coleman. In this book, Coleman explores the history of women in several Muslim nations and how they are using the increasingly popular notion of “Islamic Feminism” to empower their respective communities. Photo credit: @relaxedphotographer #SoukieSpeaks #InMyBurkini #PhotoCampaign #FemaleEmpowerment #Change #Reading #Education #Knowledge #Inspiration #CommunityBuilding #PlageMehdia #Kenitra #Morocco #DubaiBlogger #DubaiBloggers #AbuDhabiblogger #AbuDhabibloggers #UAEBloggers #Dubai #DXB #AbuDhabi #AUH #UAE

The five-day project, Rachidi says, is designed to instead open up a conversation and help people from different backgrounds engage with one another.

“This series will depict me doing mundane things, dare I say funny, in a burkini to remind people that nothing we wear, or don’t wear, should deprive us of our humanity or humour,” she said.

“I believe that the first step to creating meaningful dialogue between people is to make sure that they can connect with each other and that can never happen if we’re not willing to let our guard down.”

The blogger has so far shared pictures of herself with a sunglasses-clad dog, with her surfboard, and reading on the beach.

Photo Series Day 1: Surfing #InMyBurkini There is nothing more exhilarating than gliding on a perfect wave and then plunging into the cold water of the Atlantic. For me, surfing is all about learning how to overcome failure, because when you wipe out you don’t get out of the water. You go back in and you catch the next wave with determination. I love this sport because it reminds me that standing up isn’t nearly as important as learning how to fall and get up again. A lesson that resonates in every part of my life. Be inspired: Check out the teaser of the documentary “The Most Fearless” on YouTube, which shares the powerful story of Nasima Akter, Bangladesh’s first female surfer, who is challenging her community’s conservative social norms and making waves! PC:@relaxedphotographer #SoukieSpeaks #InMyBurkini #PhotoCampaign #Empowerment #Change #CommunityBuilding #Surfing #PlageMehdia #Kenitra #Morocco #DubaiBlogger #DubaiBloggers #AbuDhabiblogger #AbuDhabibloggers #UAEBloggers #Dubai #DXB #AbuDhabi #AUH #UAE

The situation in France

The burkini was banned on some French beaches as of August this year, with 11 municipalities adopting the law – including popular tourist destinations Nice, Cannes, Eze and Saint-Jean-Cap-Ferrat on the French Riviera.

The ban allegedly came following Prime Minister Manuel Valls’ remark that the swimwear is “not compatible” with French values. The mayor of Cannes called it “a uniform that is the symbol of Islamist extremism,” and the formal burqa is already banned in the European country too.

Fortunately the negative feelings surrounding the burkini have not been felt worldwide. In fact, in Australia one designer Aheda Zanetti has seen an increase in sales for her burkinis, especially among non-Muslims.

Also fighting against the ban is Algerian businessman Rachid Nekkaz, who has paid out more than £200,000 (Dhs962,429) in fines and legal fees levied on Muslim women who defied the ban.