This Impromptu Singalong On An Emirates Flight Gave Us Goosebumps 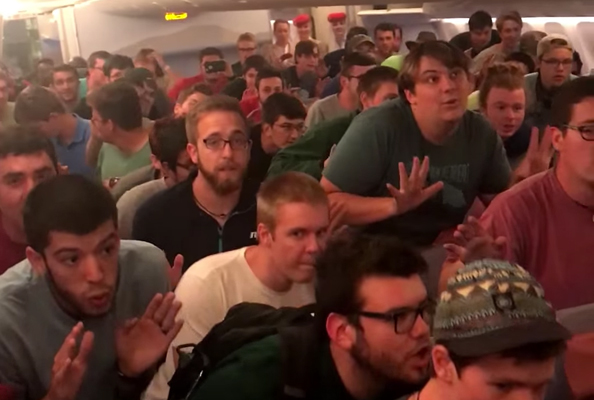 This sure beats the usual landing routine of standing in the aisles.

When a plane’s wheels touch down, you might sometimes hear a round of applause in the cabin.

You may even get a cheer, or maybe a whistle.

However you don’t often get a chill-inducing a cappella number – but that’s just what passengers were treated to on a recent Emirates flight.

A men’s choir was travelling onboard a flight from Kenya to the US with the Dubai-based airline, and celebrated their return to the States with a rousing rendition of Da Coconut Nut.

Just check out these harmonies on the track, originally performed by Filipino band Smokey Mountain:

The Baylor University School of Music Men’s Choir, which is made up of 75 soulful voices, was flying back after completing a mission trip in the African nation.

The Texas-based choir broke out into song shortly before disembarking, to the delight of crew members and fellow travellers.

Read:
Why The Rich Kids Of Saudi Are Grabbing The World’s Attention
7 Of The Best Relaxing Spa Deals Around Dubai This Summer

Emirates shared a clip of the spontaneous performance on its social media channels, where it’s since had more than 80,000 shares and 8 million views.

(It’s the accompanying choreography that really makes it, like a real-life Glee scene).

The musical number was performed to thank Emirates crew for their service during the flight, according to the airline.

Fingers crossed there’s a choir onboard our next flight too…