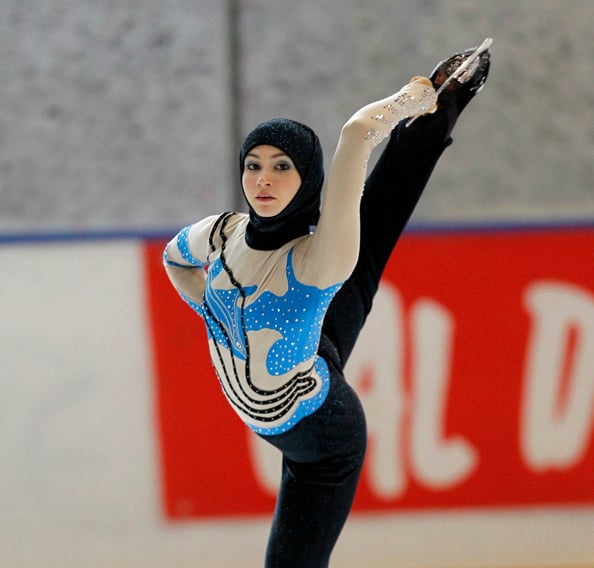 Zahra Lari may hail from one of the world’s hottest climates, but she is determined to become a superstar on terra firma that’s much, much colder.

Dubbed the Ice Princess in a Hijab, nothing is going to stop Emirati sportswoman Zahra Lari, in her quest to compete in in the 2018 Winter Olympics.

Having already competed in international competitions in places like Slovakia, Hungary, and Italy, the 21-year-older figure skater from Abu Dhabi wants to represent the UAE in the 2018 Winter Olympics in Pyeong Chang, South Korea.

While the UAE has had representatives perform at the Summer Olympics – check out this year’s impressive team here – the country has never had a sportsperson attend the winter games.

Lari has been skating since she was 11 years old after becoming infatuated with the Disney movie Ice Princess. While her first attempt at skating may have been more like Bambi on ice she soon discovered she was a hit at the sport.

Read: 5 Common Stereotypes About The Hijab

Read: Why These Muslim Athletes Have Garnered Attention At The Olympics

Read: The Women Representing The UAE At The Summer Olympics

Soon, what started as an after school hobby became a passion for the sport, with Lari’s friends soon dubbing her the Ice Princess in a Hijab.

As for the Hijab, the teen claims she has no issues wearing it when conducting the sport. She told Arabian Business: “I’m very lucky and haven’t found any difficulties due to my hijab. I have both Muslim and non-Muslim skating friends all over the world and they all support me and understand my hopes, dreams and goals. We all have a mutual respect for one another.”

Lari trains four to seven days a hours a day, balancing training with her educational duties at Abu Dhabi university. A move both of her parents fully support (though she admits he dad was slow to win over – “he finally understood me and how much I truly loved this sport”).

While she is training to qualify for the Winter Olympics, and make history in the process, Lari admits even if she doesn’t make it the games, she is happy and proud to be a role model for young Muslim girls and those in figure skating.

However, if she does make it in to the Olympics in 2018, she’ll be following in the footsteps of fellow Muslim athletes including Bahrain’s Ruqaya Al Ghasara, (Athens 2004), who was the first Muslim woman to wear a hijab at the Olympics.

Either way we think it’s only a matter of time before the ambitious and inspiring Zahra Lari will be making history soon.